Apologies for the delay in getting around to writing up my time in Poland, there was a lot of boat jobs that needed doing before I could put Logic back in the water, plus the daily changes in the world as it responded to the Wuhan Virus (CoVid-19). But I have been using the time constructively, to process the enormity of my experiences in Poland.

Growing up in Australia I had very minimal first hand exposure to the reality of war (apart from some great uncles that spent WW2 in Japanese POW camps, but their experiences were never discusses), that cannot be said for people my age growing up in Poland.

Michal and I went to lunch with his mother Vanda, who told the story of her mother heavily pregnant with her, waiting on a railway platform at the height of WW2. A train pulled up, loaded with carriages full of Jews on the way to an extermination camp. While the people on the train were asking her where they were, two German soldiers walked up behind her and added her to the occupants of the carriage. Luckily Mikal’s grandmother spoke German and when she told the controller what happened, her ordered her off the train, as the two extra occupants would have upset his figures.

The German “group think” at that time was that Slavic people were vastly inferior and the best Slav was a dead Slav.

In the cruising fraternity in the South Pacific Islands there is disproportionally large number of Germans, invariably they are all people I would “have a beer with” and they are all ashamedly apologetic for what their forbears did during WW2.

I am a tertiary educated Classical Scientist; I was taught to have a healthy skepticism. My skepticism had me lumped in the pigeon hole of “denier” of the 21st Centuries’ new “group think” religion of Global Warming/Climate Change. My skepticism has cost me friendships, some of whom would agree with me and my ilk been loaded into cattle carriages and sent off to re-education/ extermination camps.

My week in Poland dramatically expanded my comprehension of how humans can justify and do the most horrendous things to other humans.

So how did I end up in Poland you ask;-

When we were in Estonia, I received an email for a guy in Poland, telling me that he enjoyed reading my blog, saw I was in Eastern Europe, and offered for me to come to Poland to stay with him and his family. He was also building a Mumby Catamaran and had met Tim. So I sent of am email to Tim, to make sure he was not a nutter. Tim’s reply was the was a good guy and a recommendation that I took Michal up on his offer.

So for the last week of my European Odyssey  I flew from Dublin to Warsaw.

Michal and his wife Monika, were the perfect hosts 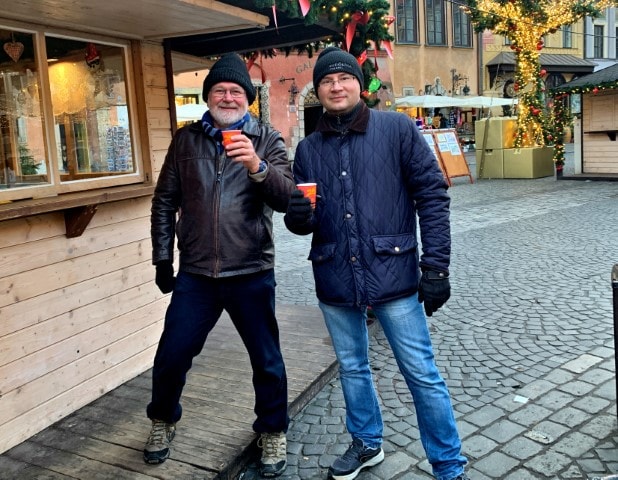 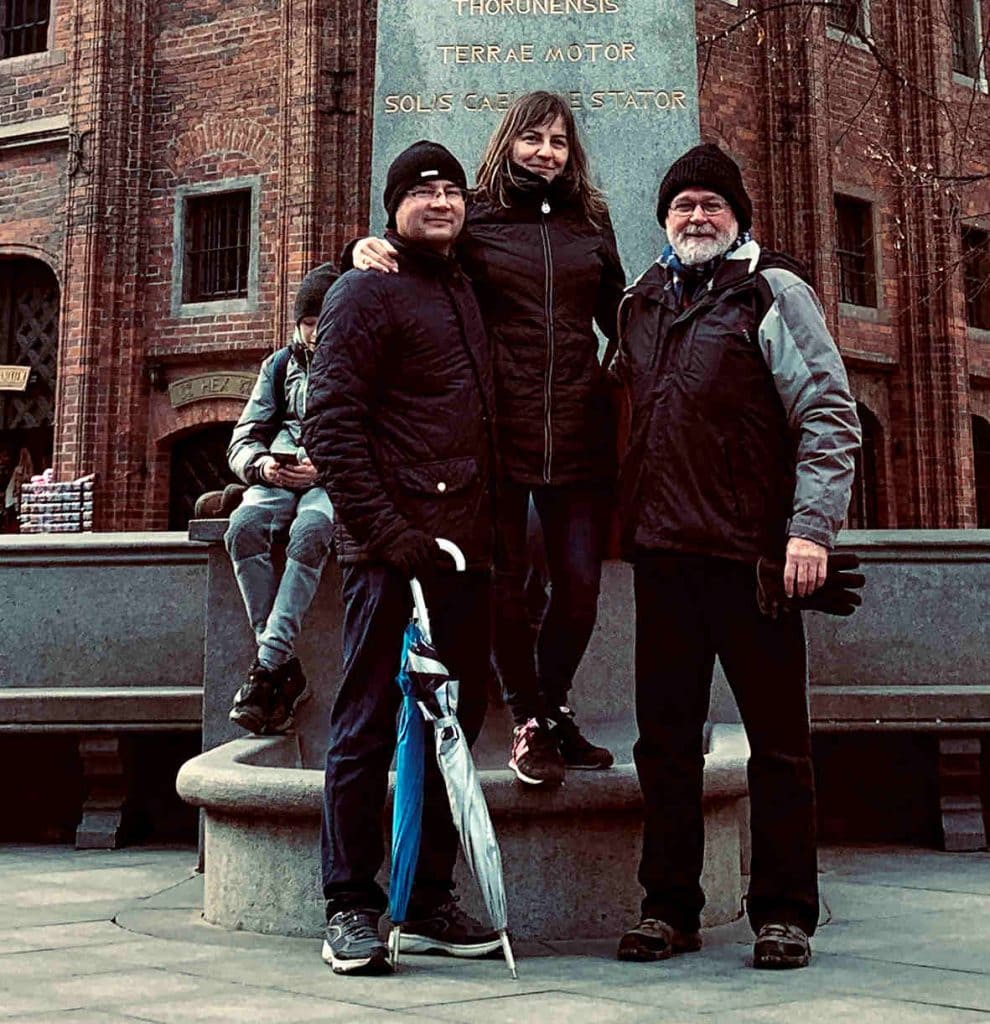 In my reading of Polish History, the differences between it and the history I grew up exposed to (Australian and British) was stark. Australia has never had to fight an enemy on it’s home shores , while the last time it happened in Britain was 1066, when the Normans Invaded. The English Channel halted Nazi Germany’s western expansion in WW2, and all the recent movies showed how difficult it was for the Allies to get a foothold back in Continental Europe, from there on it was “relatively” easy.

Poland did not have an English Channel, but rather massive borders that were arbitrary lines drawn on a map, separating it from large populated countries that have had long periods of military expansionist history. The troops did not have to be loaded and unloaded off ships, but rather marched across a line on a map, announced or unannounced.

For the last thousand years, the Poles have been having military battles with the Swedes, the Prussians, the Russians, the Turkish Otterman Empire, the Austrians, the French and the Germans, making their border lines very fluid as were their rulers. The 20th century was no exception.

In the 13th century Poland was invaded 3 times by the Mongols from East Asia, who slaughtered, sacked and pillaged Poland, leaving with thousands of Polish slaves

In 1683 the King of Poland lead the largest Calvary charge in history, 18,000 men on horseback to end the battle relieving Vienna from the Otterman empire that was besieging it. Ending the Otterman Empires attempt to conquer and Muslimify Europe.

Following the Napoleonic War in 1812, Poland became part of the Russian Empire, were it remained until WW1. During this time there was a massive amount of Polish migration to Western Europe and the New World, evidenced by all the Polish surnames in the US. There was minimal Polish Migration to Australia. The highest mountain in Australia (where I would go snow skiing with my daughters), was named Mount Kosciusko in 1840 by the Polish explorer Strzelecki in honor of Polish-Lithuanian freedom fighter General Tadeusz Kosciuszko.

In 1918, at the end of WW1, Poland became an independent county for the first time in hundreds of years. But it did not last long. In the summer of 1939, Hitler and Starlin did a secret agreement, to divide Poland between Germany and Russia. Warsaw was on the German side of the dividing line. The Poles defended Warsaw ferociously, but the German superior Airforce, Artillery and Tank numbers won the battle. With the Russian invasion of Eastern Poland, it became obvious that too continue the fighting would be a senseless loss of life, so the Polish surrendered, with their  140,000 troops becoming prisoners of war. As a result of the German air bombardments, 10% of the Warsaw’s buildings were entirely destroyed and further 40% were heavily damaged. 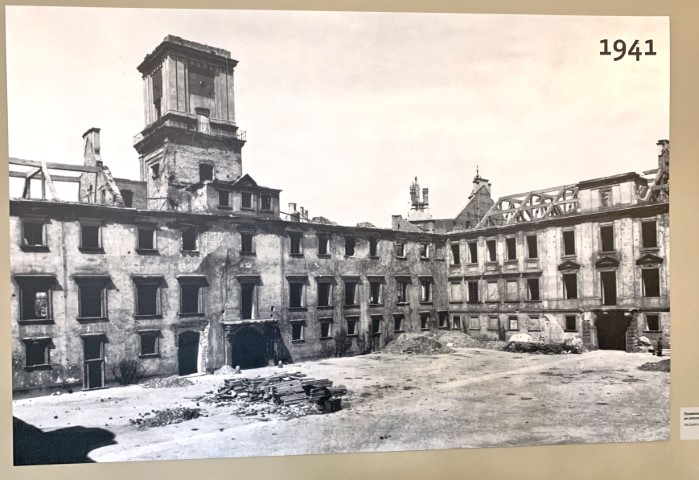 The damage to central Warsaw was not enough to affect the ability of people to live in the city. The Germans expelled 112,000 ethnic Poles for an inner-city neighborhood, surrounded it with a 3mts wall, topped with barbwire and it became the biggest Jewish Ghetto in Europe by April 1940, holding 400,000 Jews. Two years later, 100,000 had died from starvation and deprivation, the remaining 300,000 were then sent to Treblinka for extermination.

On the site of the Warsaw Ghetto, there is now the Museum of Polish Jew 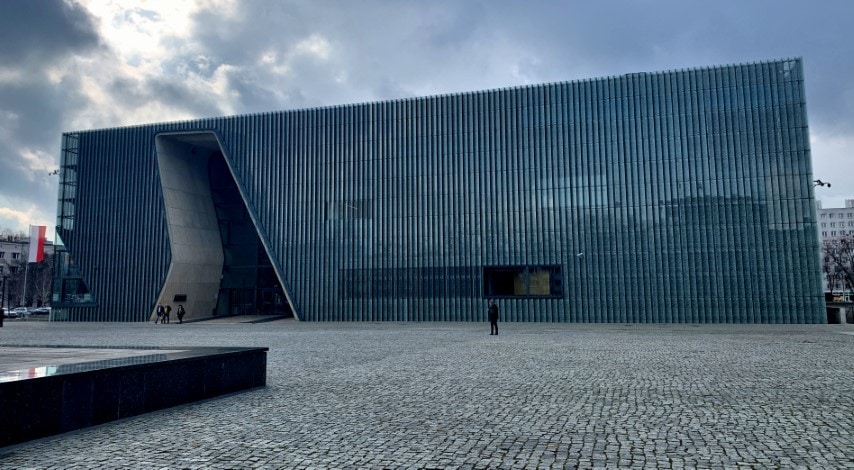 the displays covering the Jewish Warsaw Ghetto,  were disturbedly confronting

A statue outside the Museum to Jan Karski, who repeatidly was smuggled into and out of Poland during the war, to bring the story of what was happening in Warsaw, to the western world. 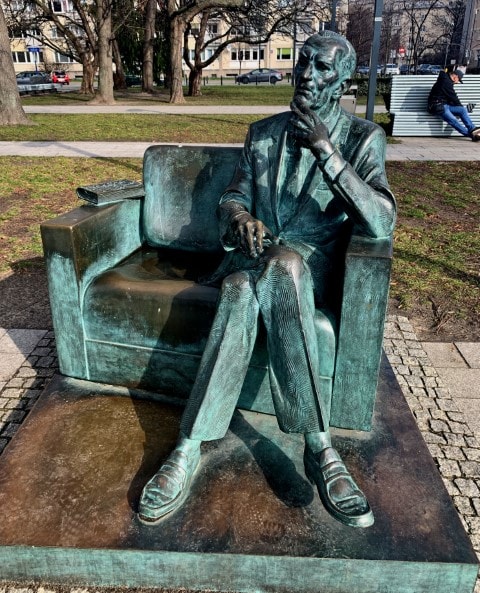 I was not just  the Jews been killed by the Germans 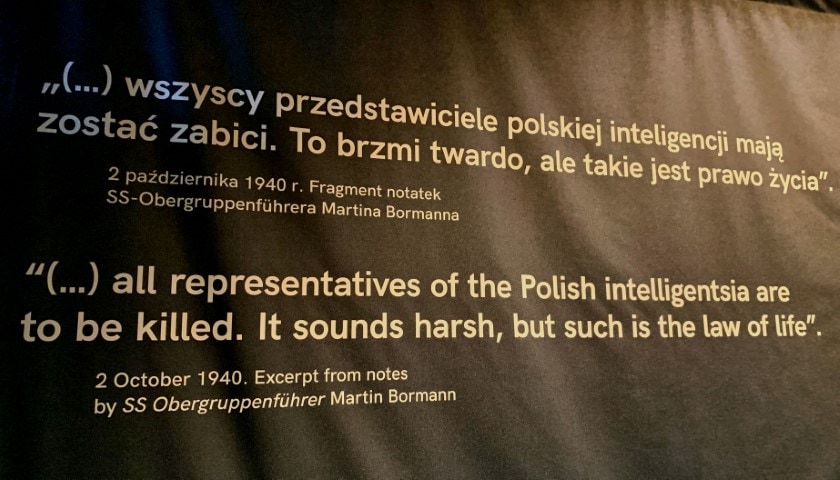 The Germans weren’t the only ones killing  Poles, the Soviet Russians after they invaded Eastern Poland, shot 22,000 Polish Militarily officers and intelligentsia in 1940, burying them in mass graves in the forests. 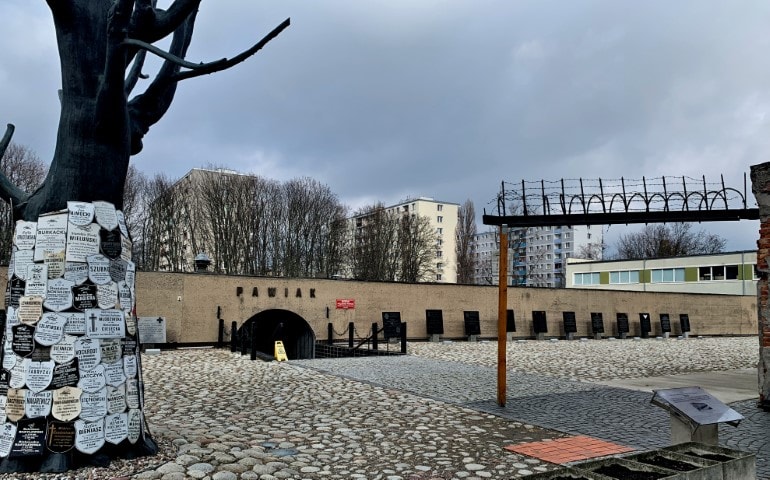 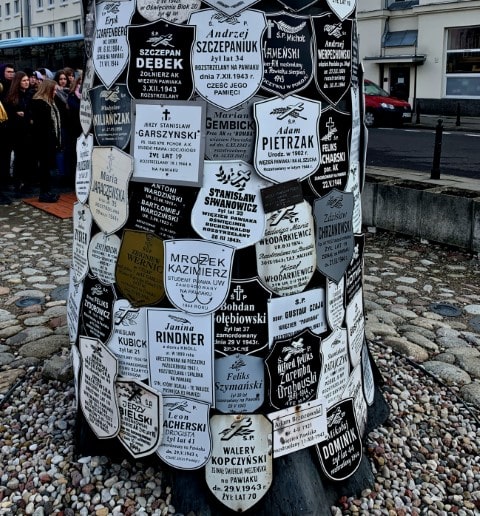 There is a very good Museum of the Warsaw Uprising in central Warsaw, were I spent a morning.

In the late summer of 1944, the Germans were retreating back through Central Europe as the Soviet forces advanced from the west. Understandably the Poles, while pleased that the German Occupation was coming to an end, would have preferred not be liberated by their traditional enemy.

When the Soviet Army got to within 13 miles of the outskirts of Warsaw, for a number of reasons (including not wanted to be called Nazi collaborators) the citizens of Warsaw, carries out a military uprising against the recently reinforced German fortifications in Warsaw. That was as far as the Soviet Army got, the Germans counter-attacked forced them back. It would be 4 months before they eventually entered Warsaw.

The bitterly fought uprising lasted 2 months, of very bloody street fighting, before the Poles surrendered in October 1944. 16,000 members of the Polish Resistance were killed, the German casualties were 2,000 to 17,000, and between 150,000 and 200,000 Polish civilians died, mostly from mass executions.

A lot of the Polish Resistance fighters were children, this is the statue of the “Little Insurrectionist”, reputed to be of a 13 year old boy who died in the first few days of the Uprising. 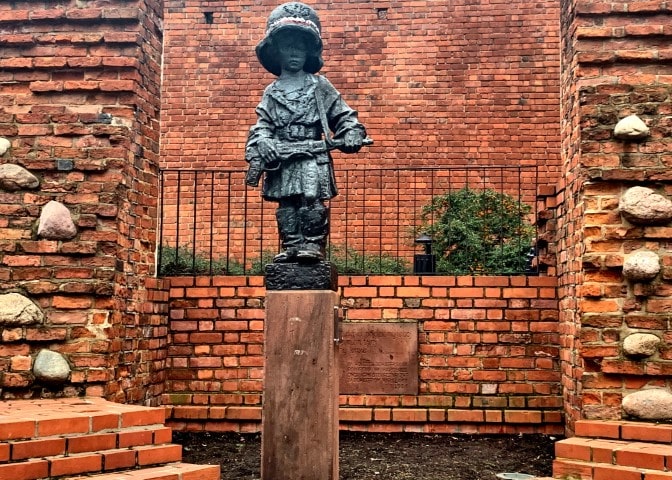 By the time WW2 ended, the Polish Civilian Casualties were 18% of their total population. 5.7 million Polish civilian died in addition to 300,000 soldiers.

In addition to the loss of life, after the Warsaw Uprising, Hitler ordered  the obliteration of the remaining infrastructure of Warsaw. 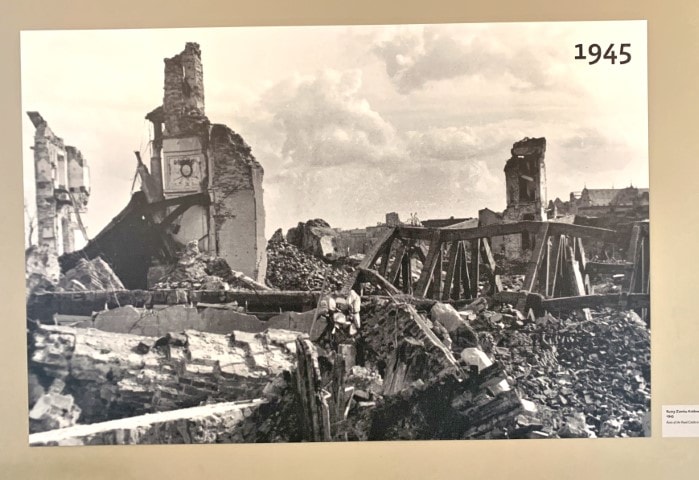 The old town of Warsaw, was left looking like this. 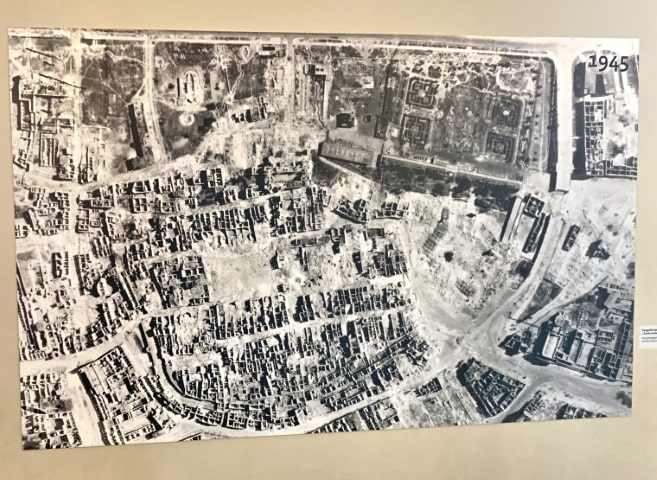 The Liberation of Poland by the Soviets, came at the cost of 600,000 Russian lives.

As you can see, those Museums and the loss of life figures as I delved into Polish History, had a profound impact on me

Finally the cyclone season comes to an end