It is only 280miles for Port Vila (Vanuatu) to the bottom of the 200mile long main Island of New Caledonia, but it is still a blue water passage and so necessitated watching the weather for  the safest and quickest weather window.

A forecast of a headwind of 20-25kts gusting over 30, had  us moving out of cruising mode, into longer days of motor/sailing to be back in Port Vila before the blow. 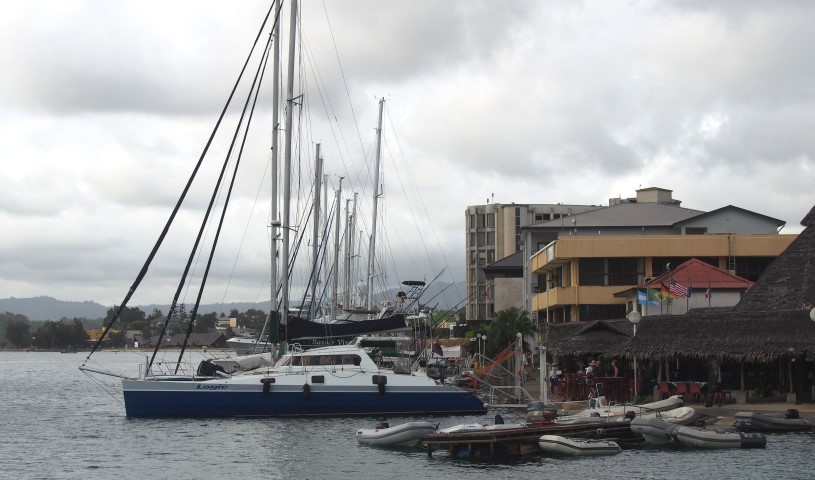 back to Yachting World’s marina, and the socialising in the bar behind the boat, while the weather settled down.

On one of my walks, I got a better picture of the yacht graveyard on the other side of harbour. These boats where washed up, by Tropical Cyclone Pam in 2015 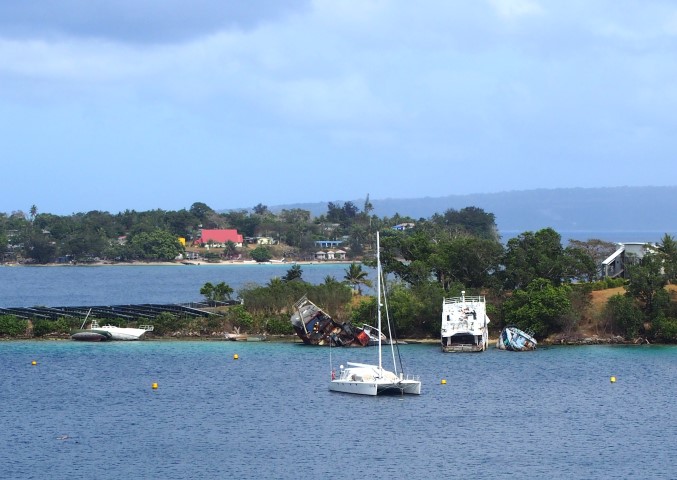 There is a considerable risk, having Logic in the South Pacific islands in the cyclone season, from early December to late April. A risk that I understandably was not prepared to take.

The forecast post the blow, was 15-20kt on the beam dropping the 10-15. I was planning to leave in the 10-15kt period to let the swell, left over from the blow decrease. Then a light northerly, half a day out of Noumea (with associated rain squalls), started appearing on the forecast, so we moved the departure date forward a day.

if you use a bit of imagination, you can see a small rain squall, in the photo below 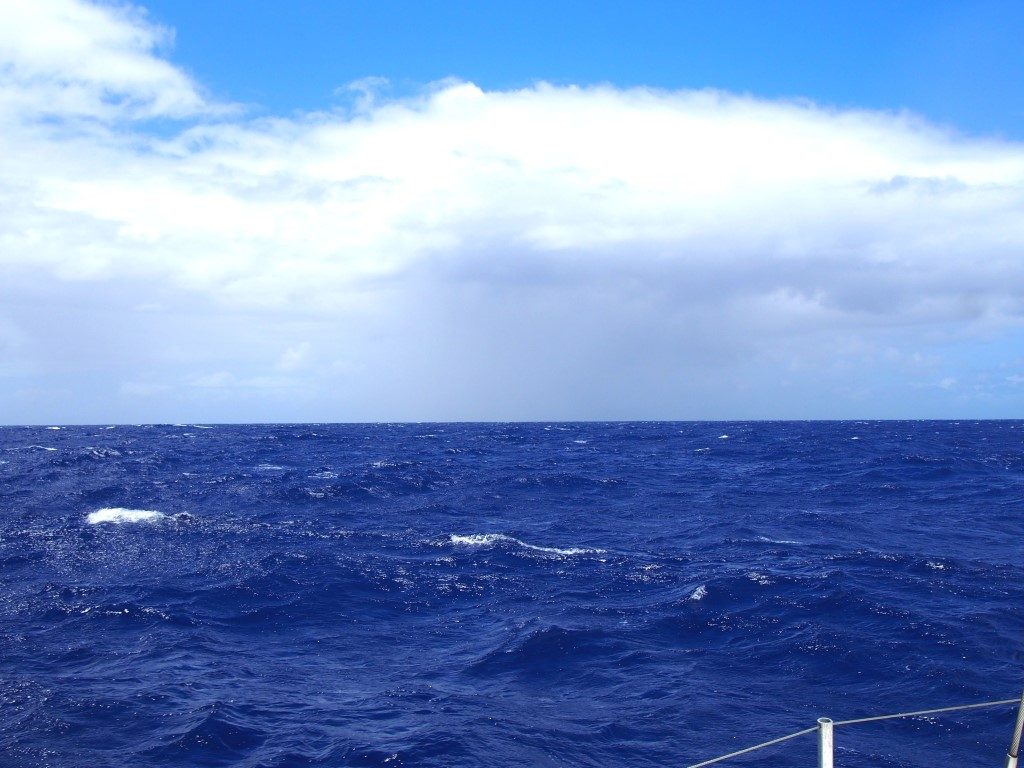 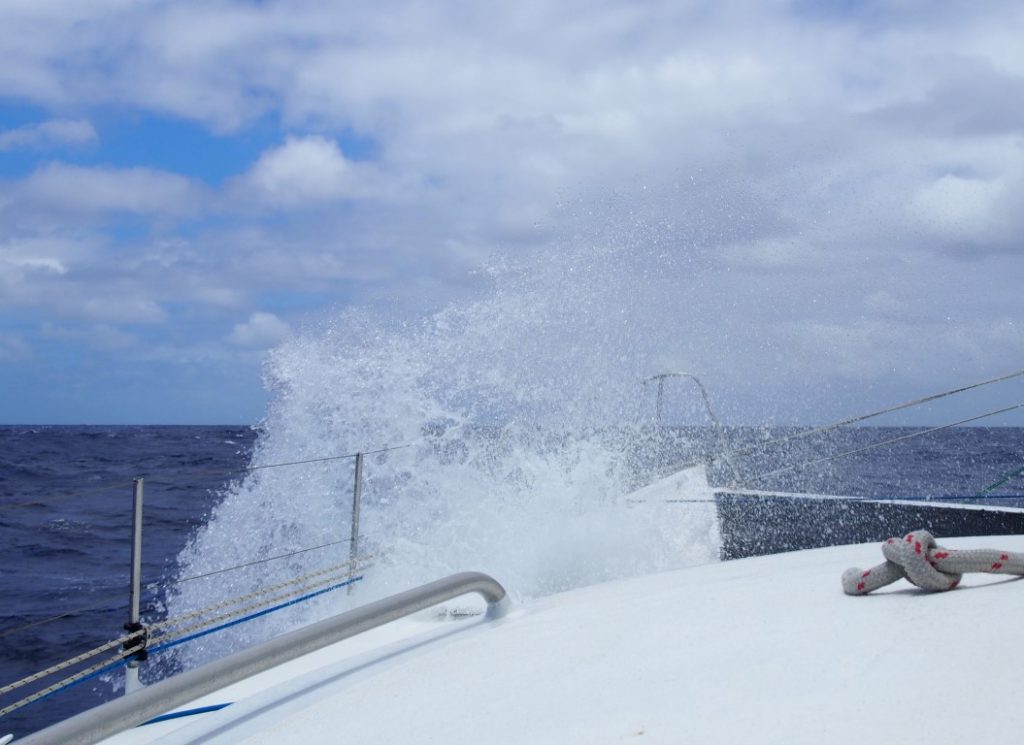 then the wind swung to the beam and picked up to 15kts. With 2 reefs in the main and the staysail, we where sitting on 8.5 to 10kts of boat speed, eating the passage miles at a good rate.

In Port Vila I went to the fishing tackle shop, to discus what I was doing wrong, as we had not caught a fish for a month. The recommendation was to use green and gold skirts for mahi mahi and black for wahoo. 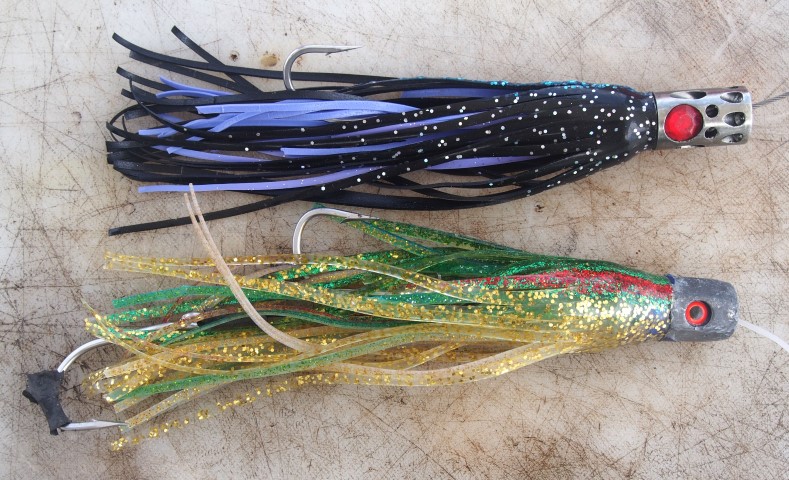 while Marisela was on the late morning watch, we sailed through a big flock of birds working a  school of bait fish, and then she called out “we have a fish”. We in fact had 2, a big male mahi mahi on the green and gold lure and a nice size wahoo on the black and purple. 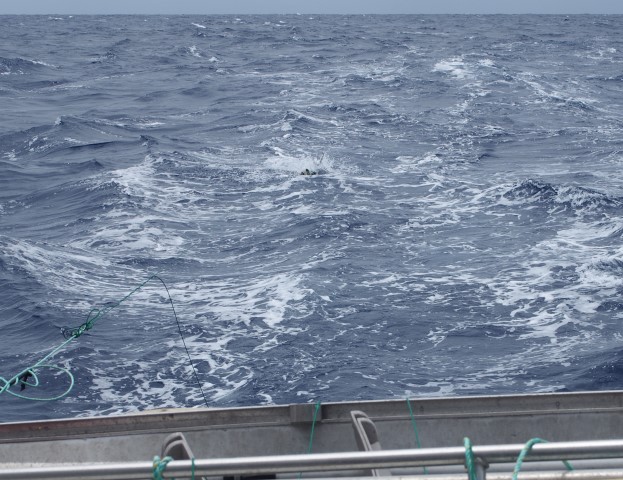 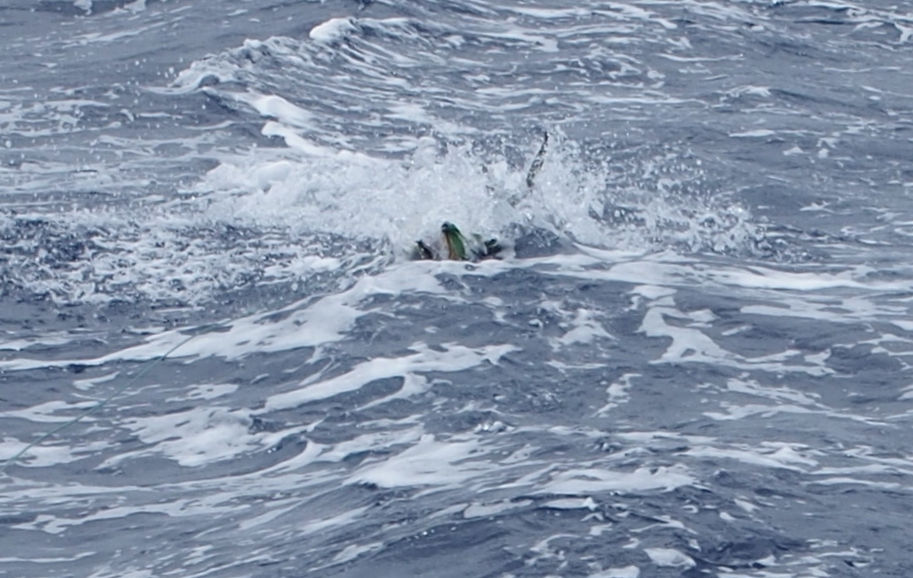 The Wahoo came in first 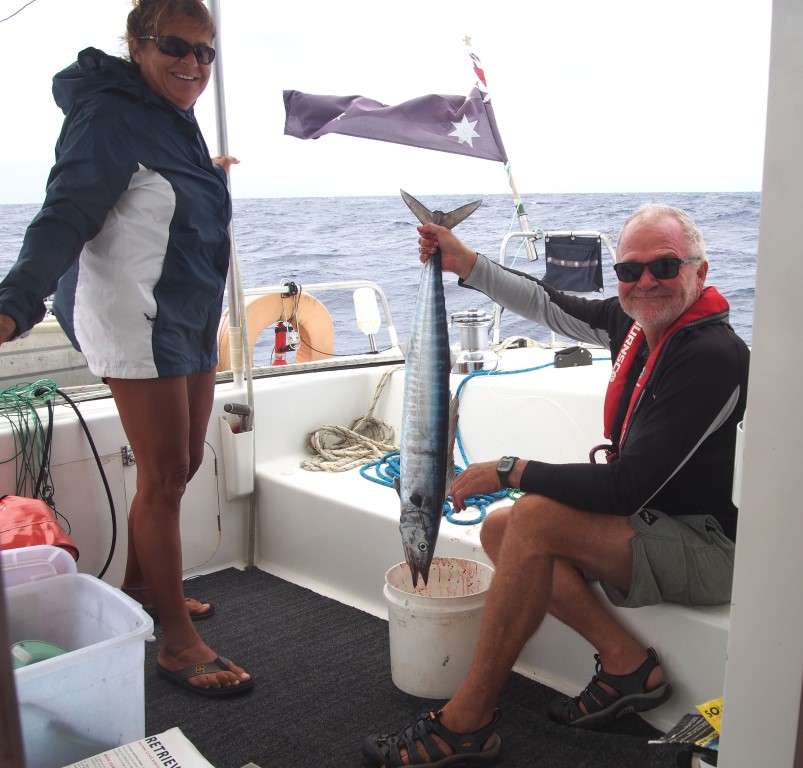 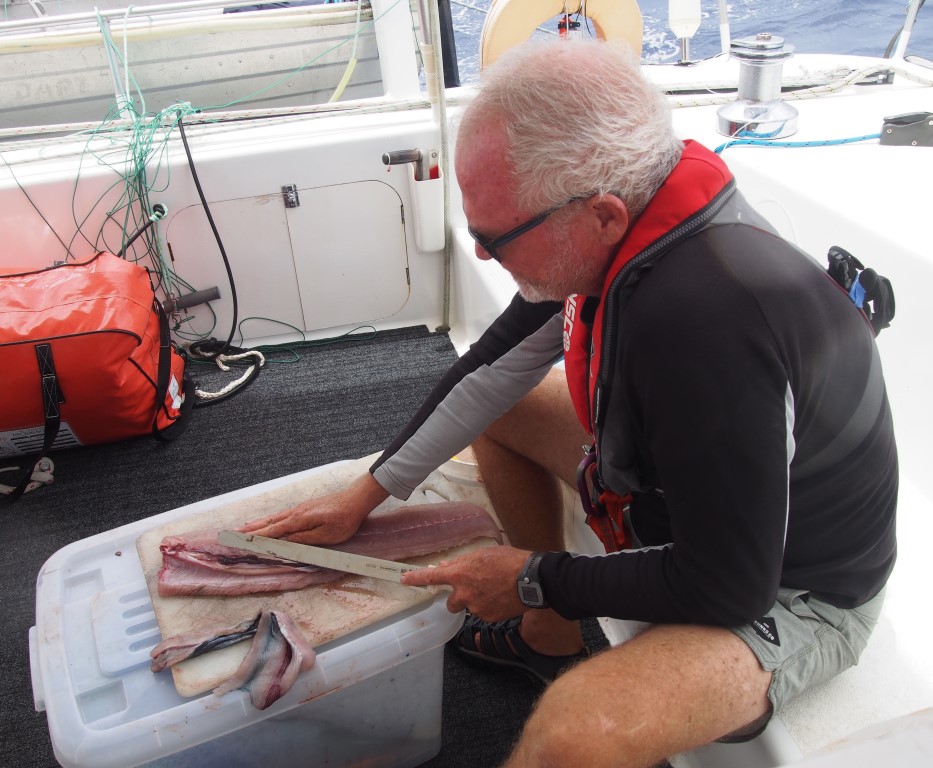 Next it was time for the big boy, normally I go down onto the back deck to land a fish, but it currently regularly had 300mm of water washing over it, so that would have been a vey silly thing to do. Luckily he stayed on the hook as I lifted him out of the water into the cockpit. 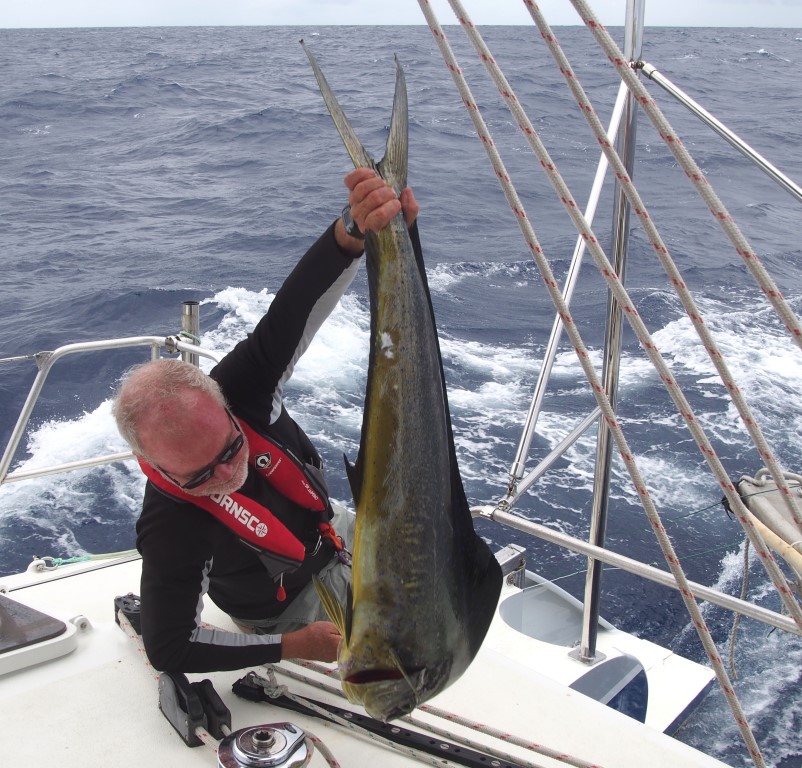 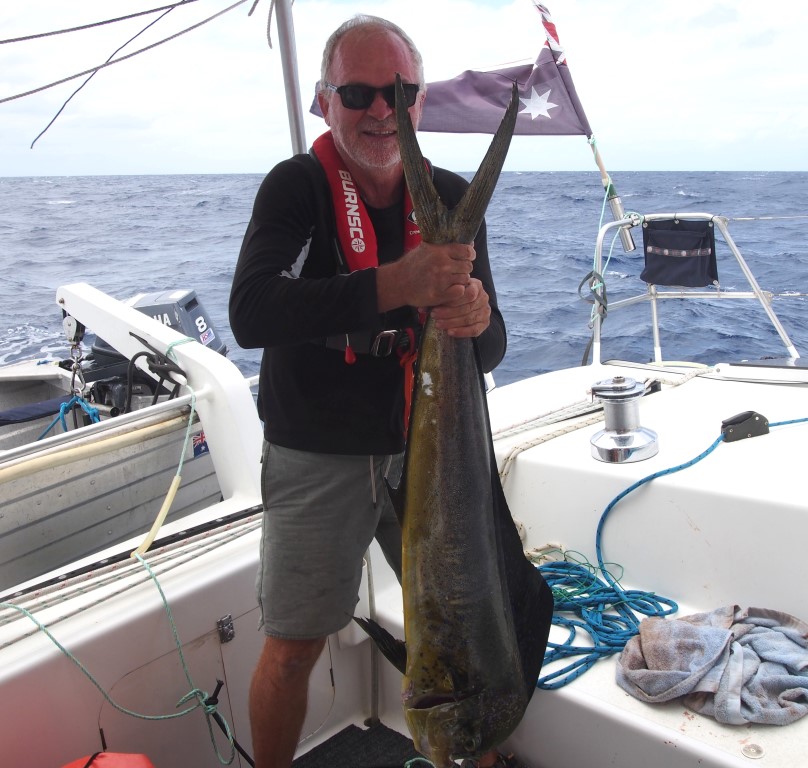 as I started to fillet him, his colour changed to a spectacular pastel blue 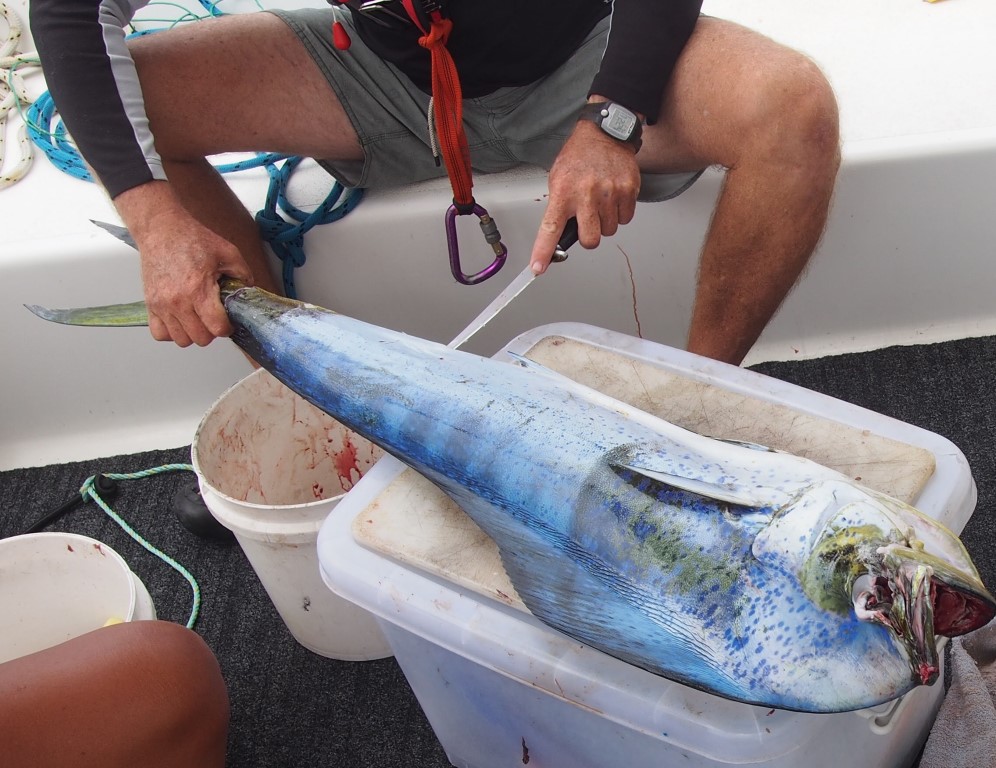 we now have a freezer full of very yummy fish 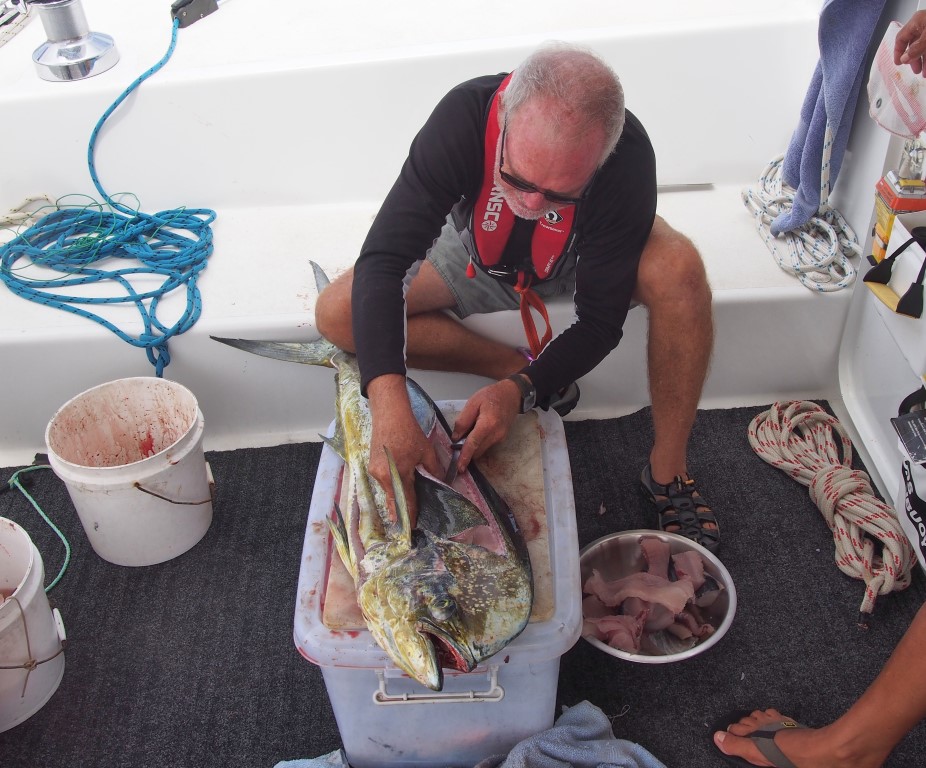 then 41 hours after leaving Port Vila we entered the Havanhah Channel, at the bottom of the main island of New Caledonia (average speed of 7.25kts for the passage). 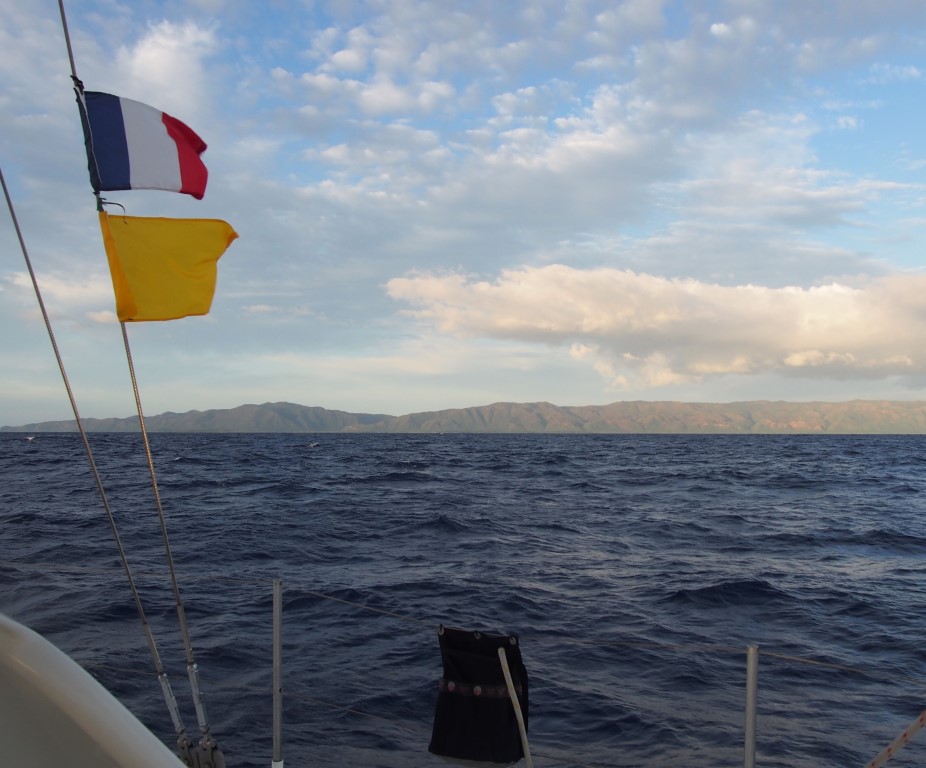 I had managed to time it perfectly, for us to arrive at first light, then cover the 40miles along the south coast and then the west coast, to Noumea.

The contrast of not seeing another boat for a few days at sea, and then having a large passenger catamaran go across our bow, was stark 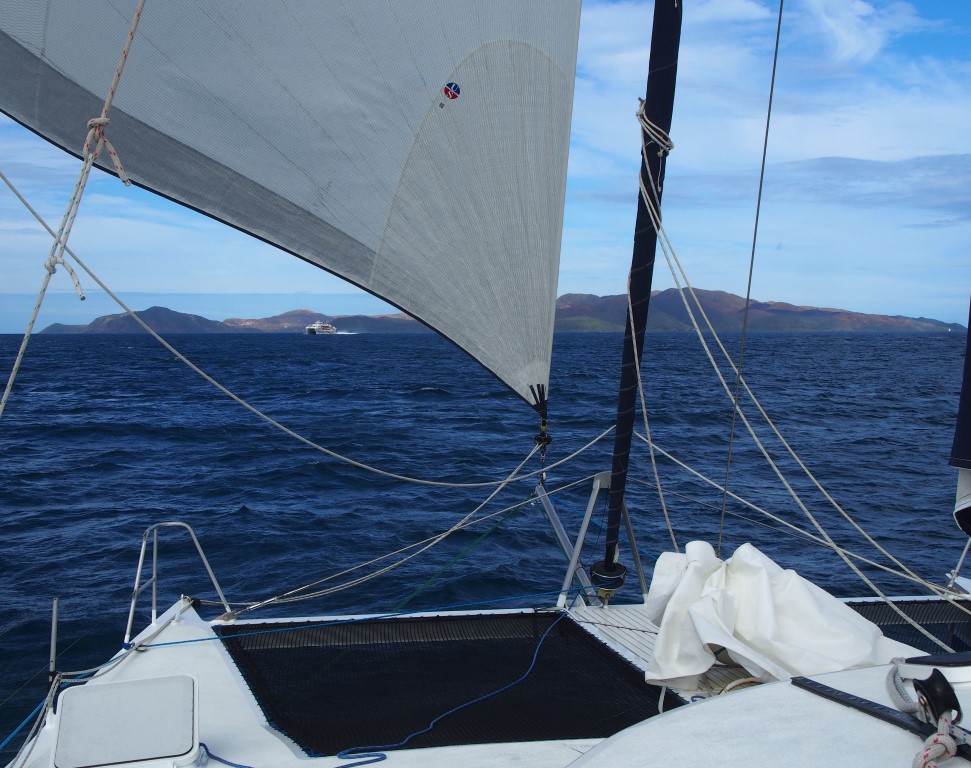 we anchoring at Uere island 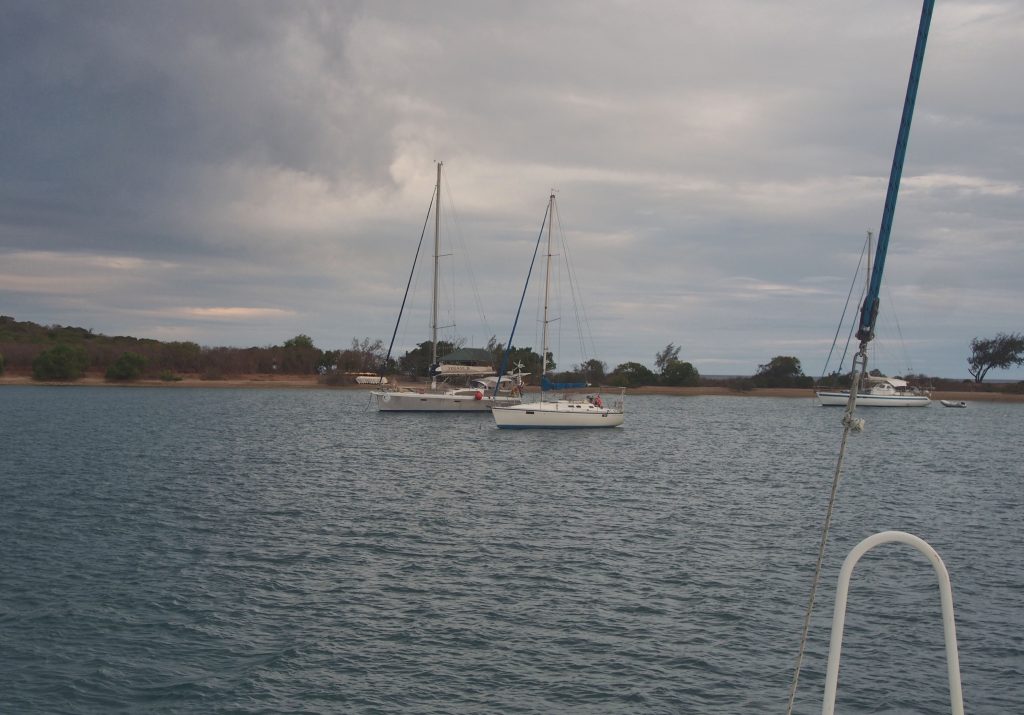 to clear into New Caledonia in the morning 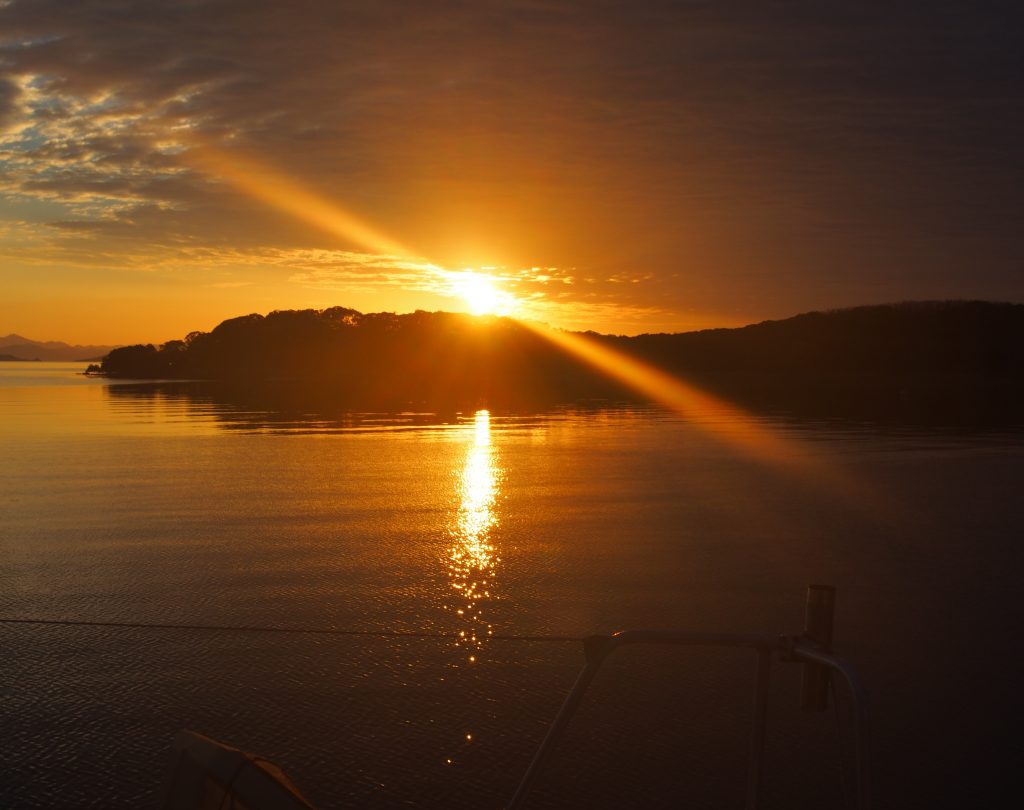 we managed to get a berth in the Port Moselle Marina 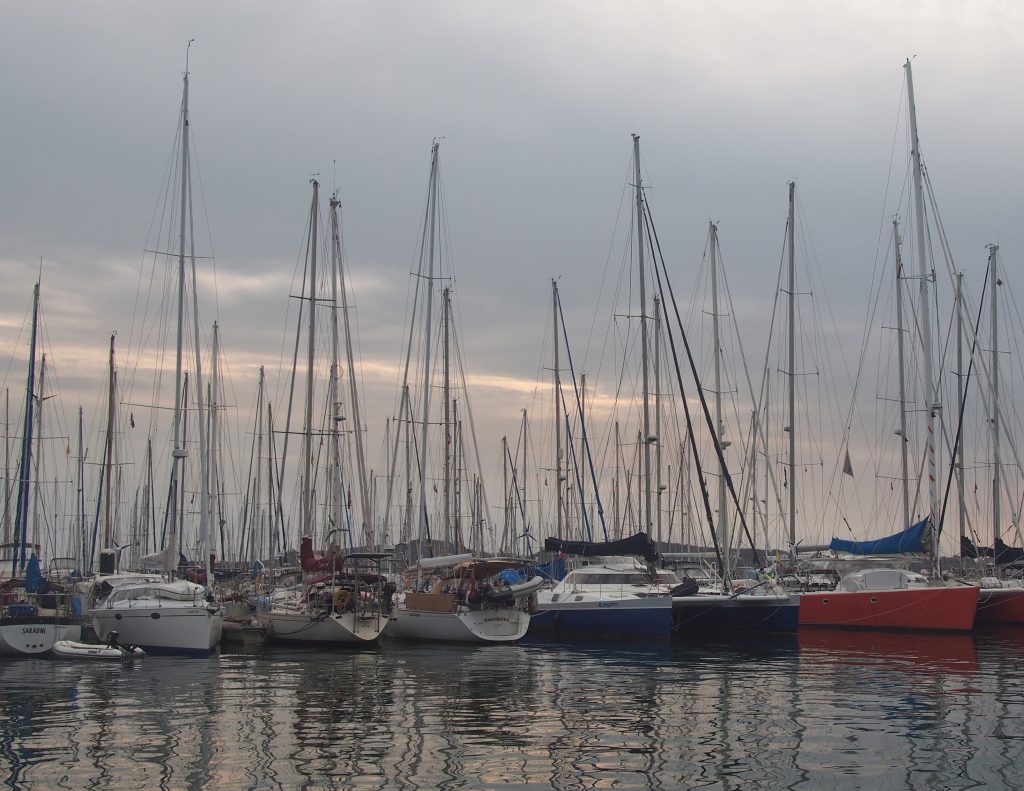 Back to the Marina style I had been use to, in Oz and NZ 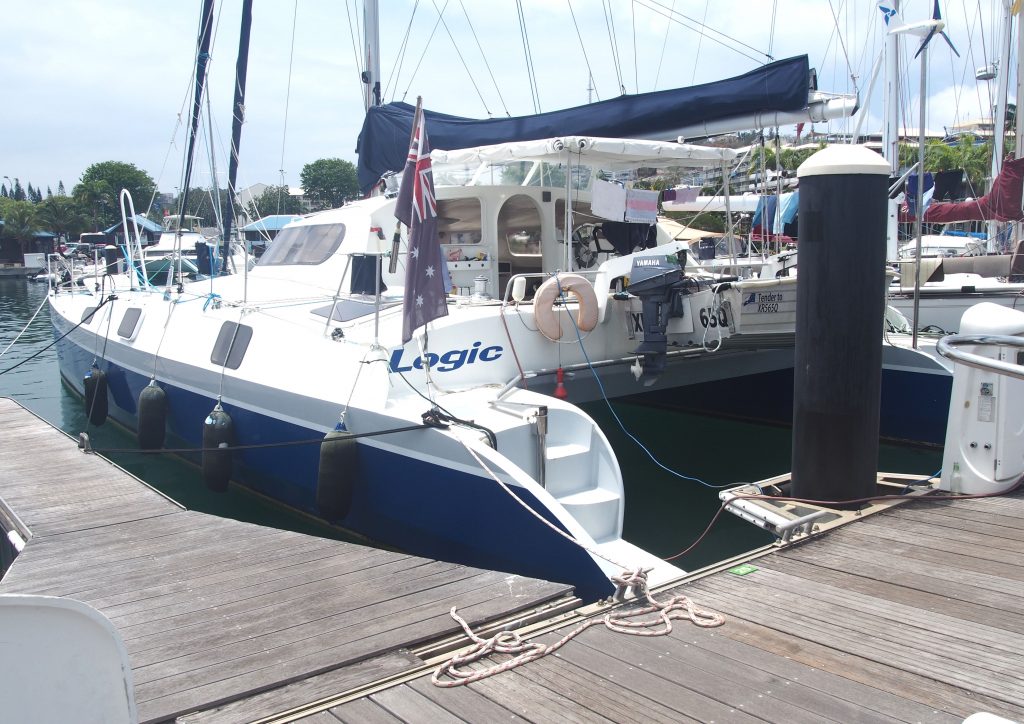 now time to get our heads around another currency. The Central Pacific franc (CPF) 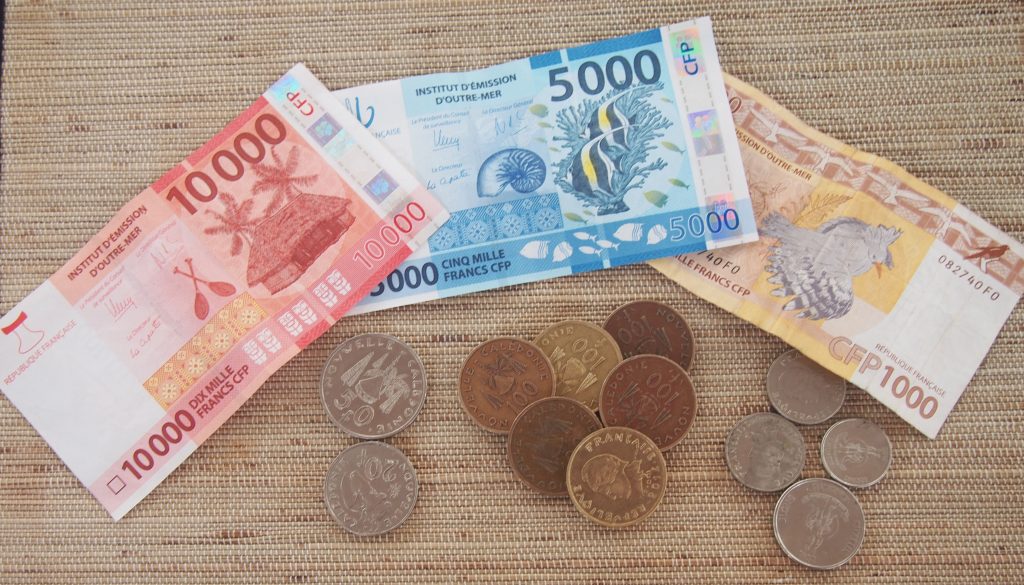 Those 100 CPF coins are enormous, a handful of them feels like Spanish doubloons 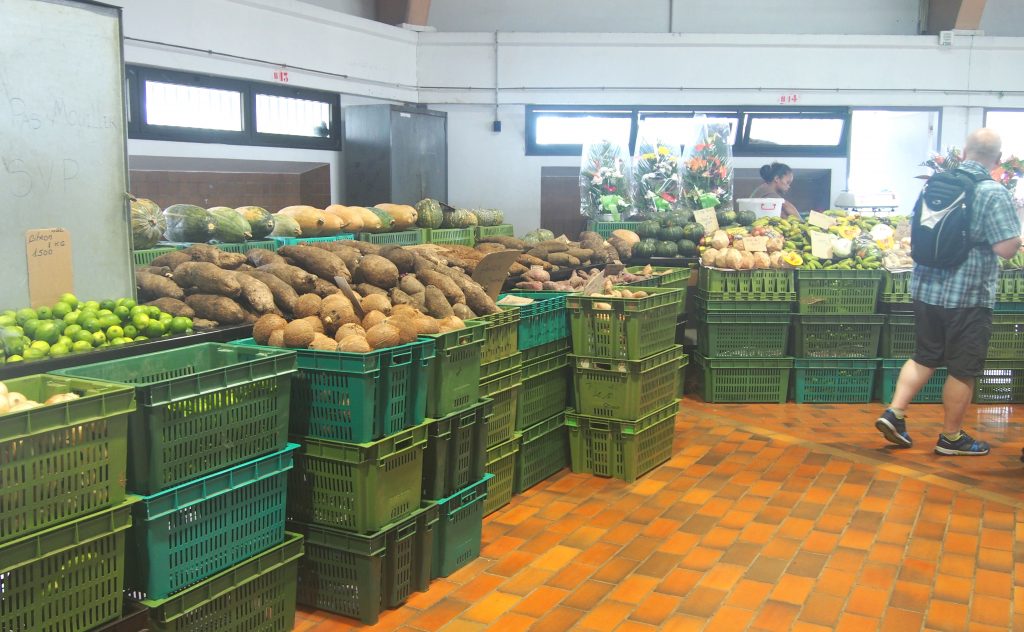 New Caledonia is part of France, and very French centric, as typified by this sign on the door of woman’s toilet at the marina 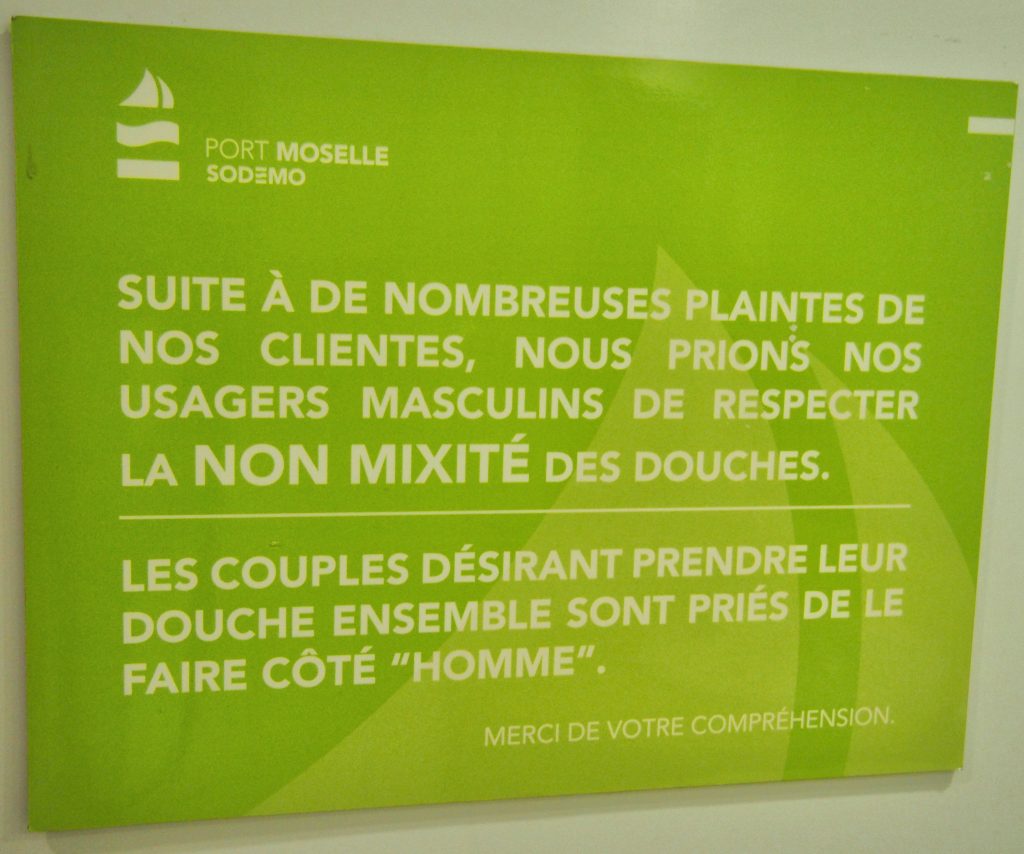 I have been told the translation is “couples wishing to shower together, need to do it in the male amenity block not the females”

A big part of the cruising life is the friends you meet along the way, and then you meeting up with them thousands of miles away in different countries.

Already in the marina in Noumea was Peter on Havachat, who I met in Fiji, he was between crew and was expecting a quite week of batching. He came over for a curry on Logic one night, where it was agreed that we were going to his boat to share some of our Mahi. 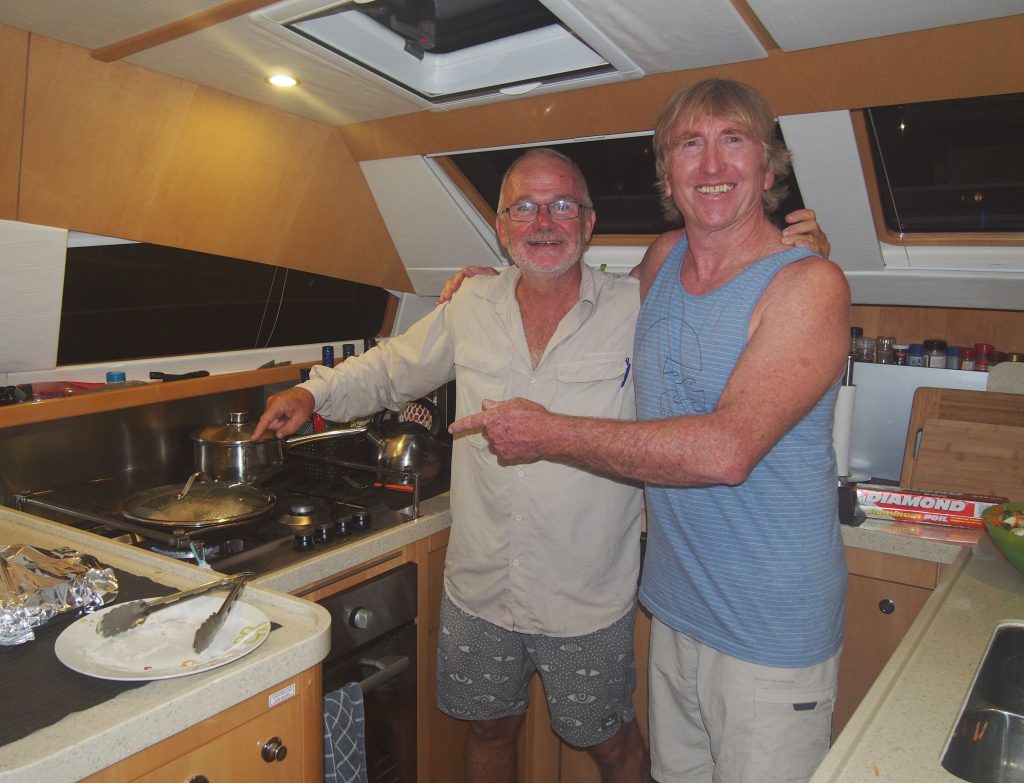 The next day Thomas and Gaylyn on Qi, arrived. I met them in NZ and again in Fiji. They had been on their way to NZ from Fiji, but has some gear failure and had to pull into Noumea for repairs. So they joined us for dinner on Havachat. 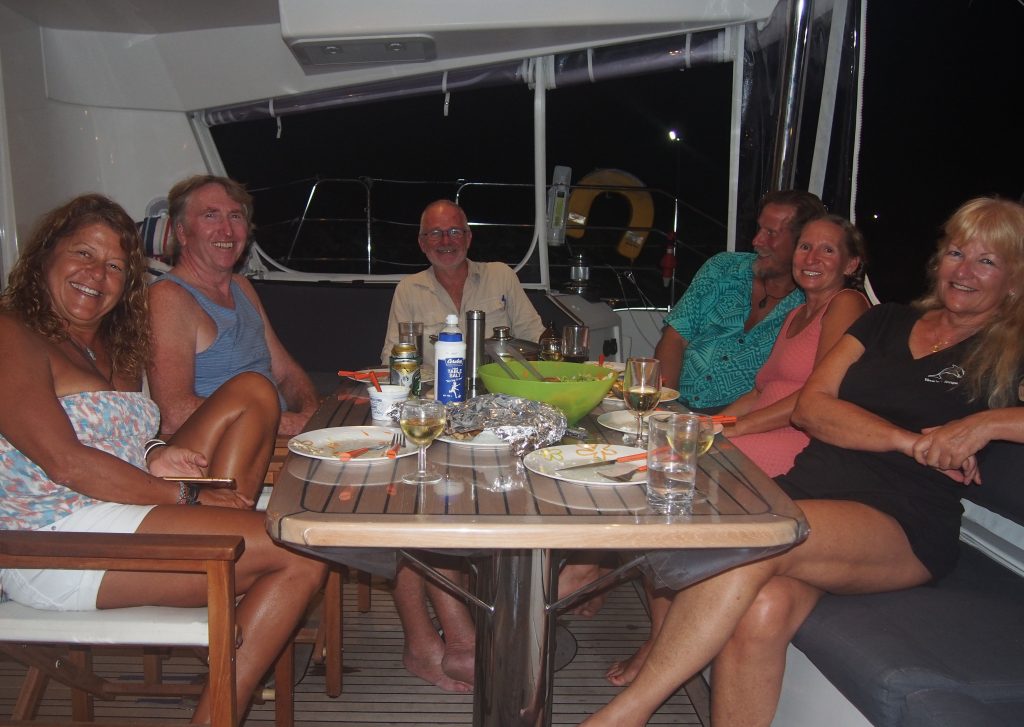