After 800 miles sailing we are in the world famous Whitsunday Islands,

or as a friend jokingly described them  “the wetsundays” . 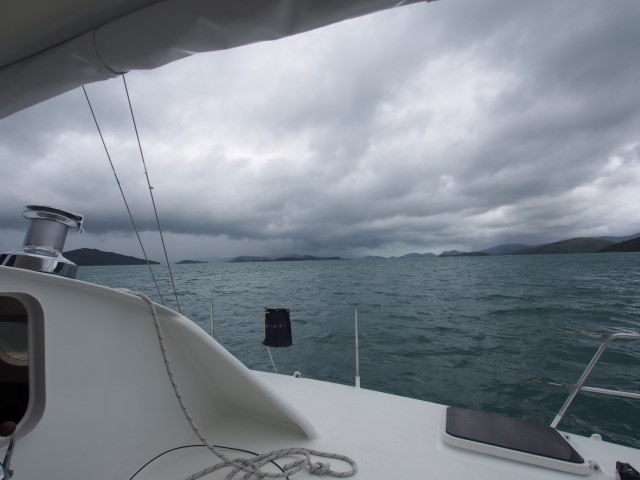 we finally got some fleeting sunshine, so we went to Stonehaven anchorage on Hook Island 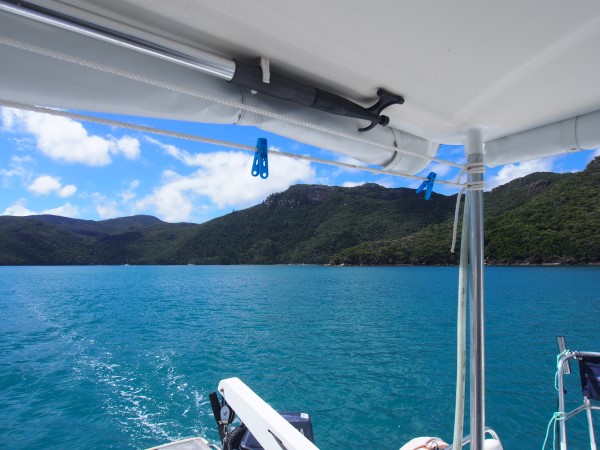 Magical spot, with coral bommies directly behind Logic, as we pulled up to the fixed mooring 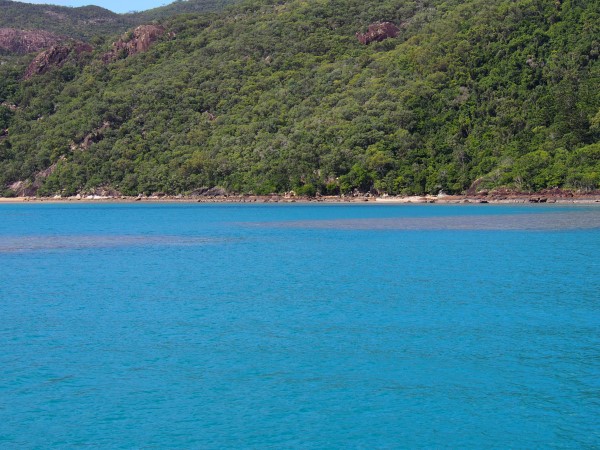 the snorkelling was not as good as Lady Musgrave Island, but the soft corals were still impressive. 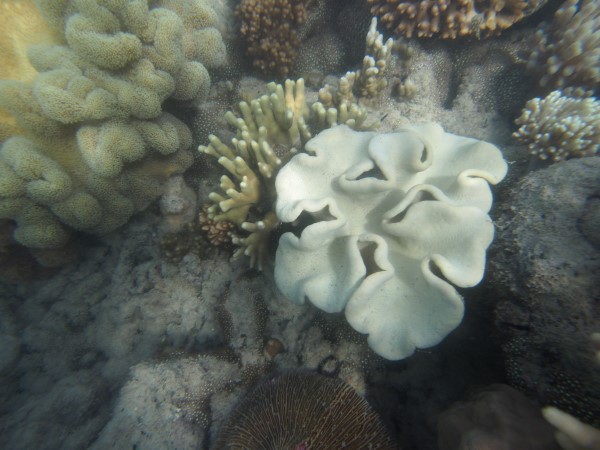 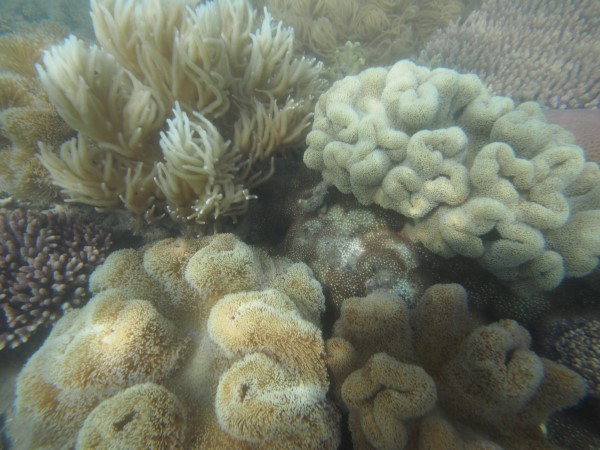 a few days latter the wind had abated a little, so we went to Manta Ray Bay, which is the number one spot for the snorkelling day trippers out of Airlie Beach.

as we were eating lunch 3 boat loads of budget travellers, pourer onto the reef behind us

The coral was nice but the visibility was very ordinary 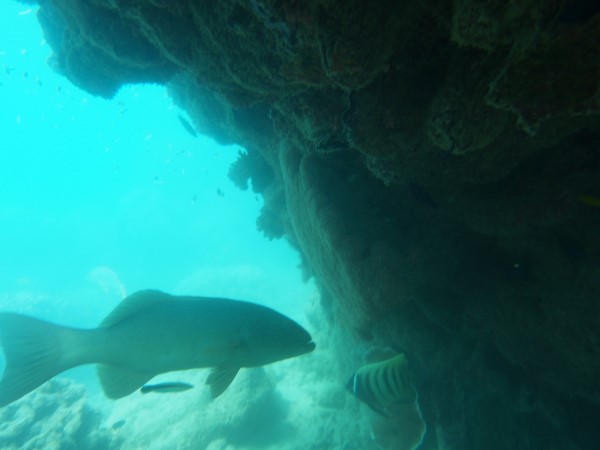 you are not allowed to fish or spearfish here, which is why this Coral Trout is still here 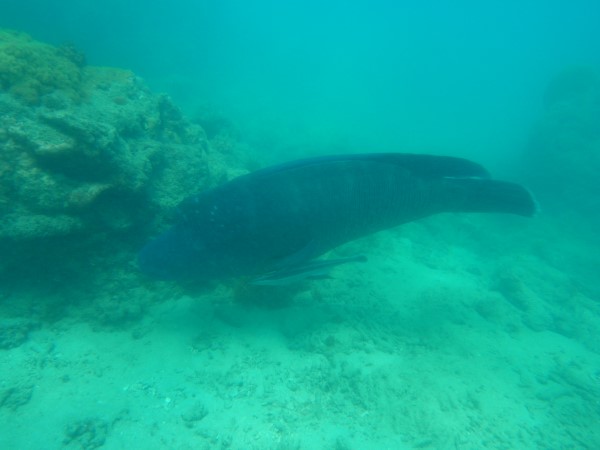 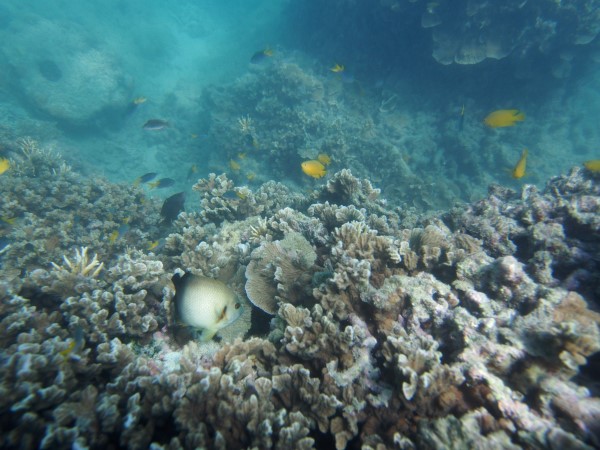 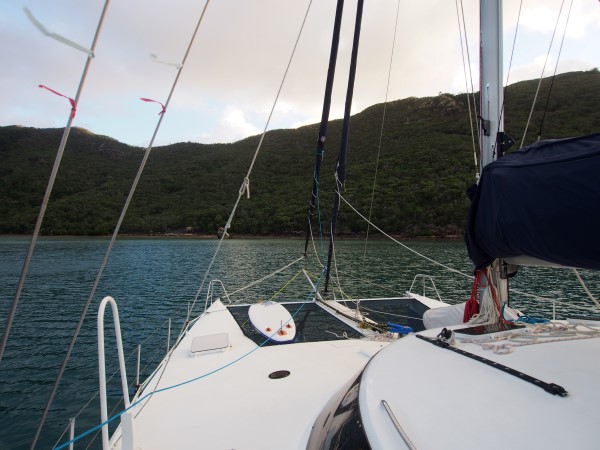 a great spot to go for a morning Stand Up Paddle  (SUP) Board, the entire circumference of the shore line was lined with coral.

there are 70 odd island in the Whitsundays, very picturesque, craggy islands

no 2 sunsets are the same, this one was beautiful. 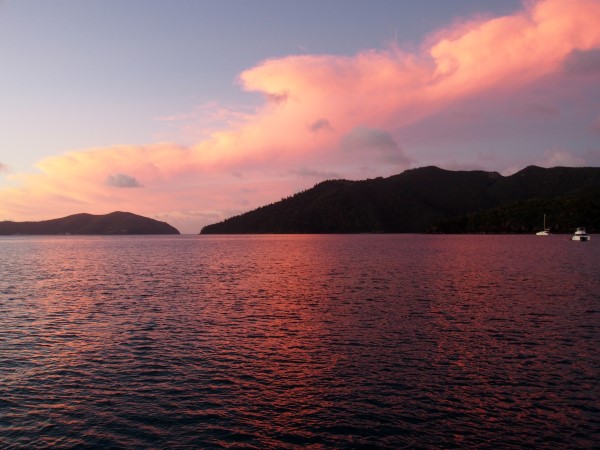 It was time to re-provision the boat, so we booked a birth in Able Point Marina. Using their courtesy car to do our shipping 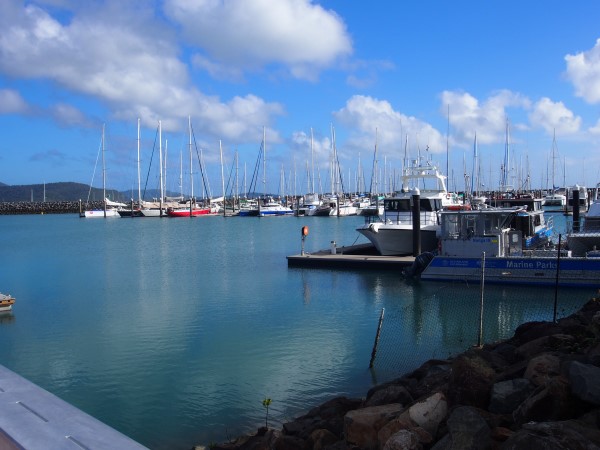 Leaving Airlie Beach we checked out the resort at Daydream Island

with it’s mermaids on rock

on route to Whitehaven Beach (the white sandy beach, a photo of which is in every tourist brochure) 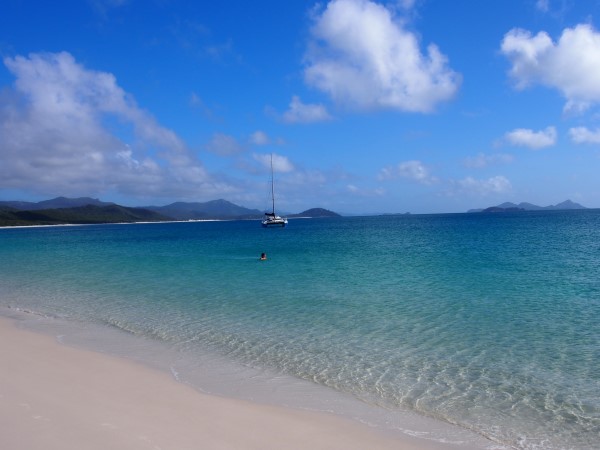 a great spot for a SUP 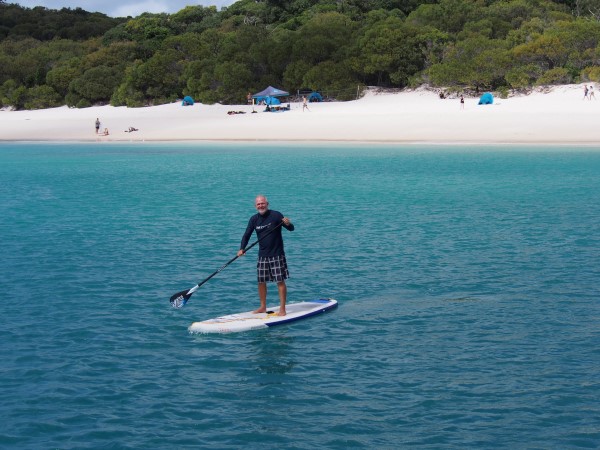 We had been watching the weather forecast. for sub 10knot winds, which would enable us to overnight on the outer reef. When we got internet after a few days of none, the weather forecast was ideal, so we pulled out the screecher and headed straight out (going past Boarder Island along the way). 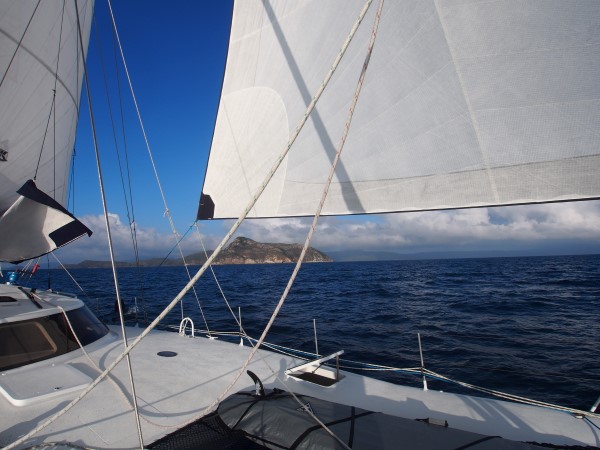 there are no islands to anchor behind out here, just big areas of coral with nothing about the water 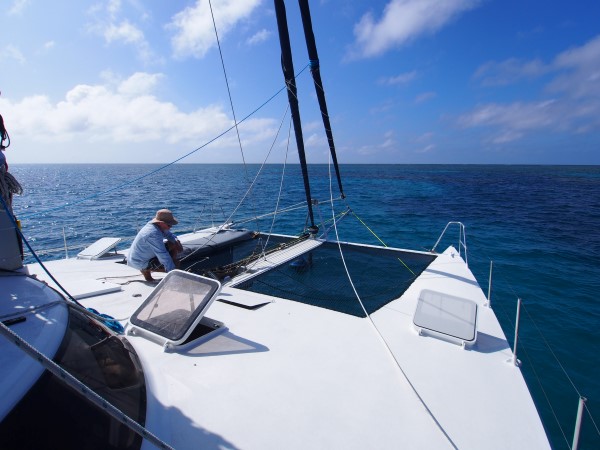 the water visibility and coral was perfect 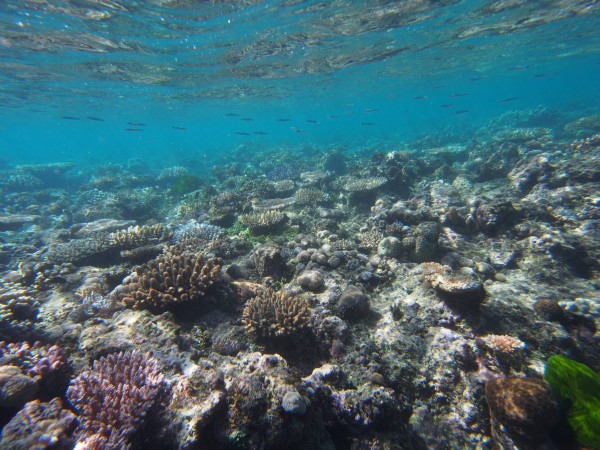 there was a friendly 1mt Mouri Wrasse, that we fed off the back of Logic 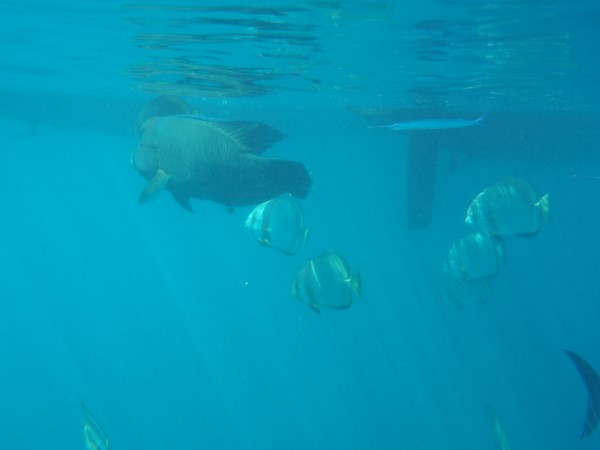 there is a spot called “the waterfalls”, where the coral had formed a very thick walled large lagoon with only 3 small breaks in the lagoon wall, for the tidal water flow  to move through. Resulting in at least a half metre difference in the water level, between the lagoon and the sea, towards the bottom the tide. At high tide I took Logic over the lagoon wall into the lagoon, anchoring her up 100mts in front of the biggest waterfall. Then we waited for the tide to go out.

I could not resist the temptation, of taking Albert, for a run (or 2 down the waterfalls, before the flow got too dangerous) 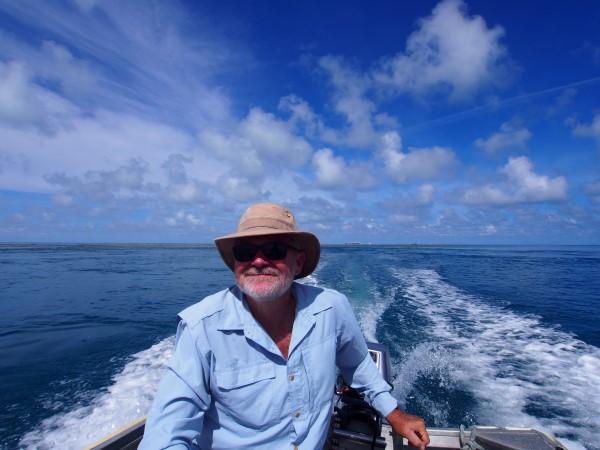 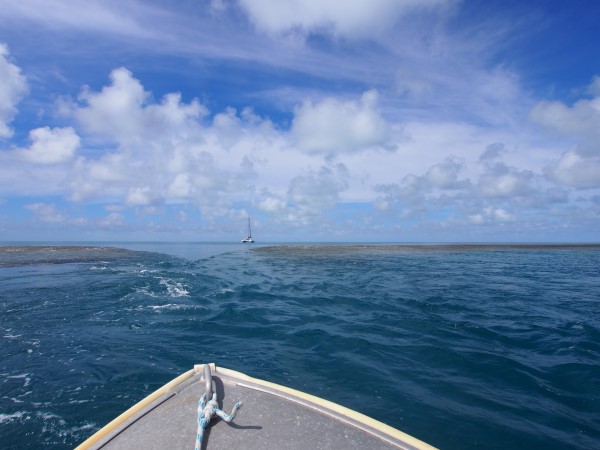 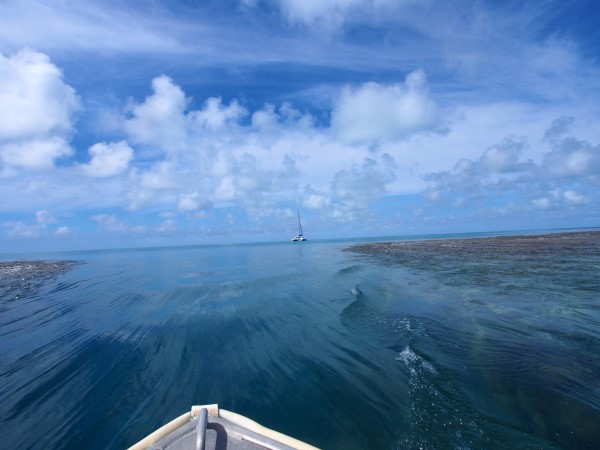 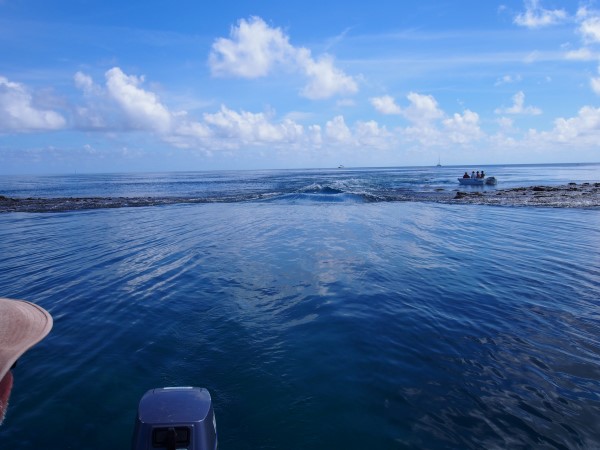 we shot a video on the last run through

The floating structure they bring the tourists out to, to give them a Great Barrier Reef experience is moored beside the lagoon, so we got Albert to take us over to have a closer look

when we got back the waterfall was in maximum flow

and then the tide came in, and everything was placid 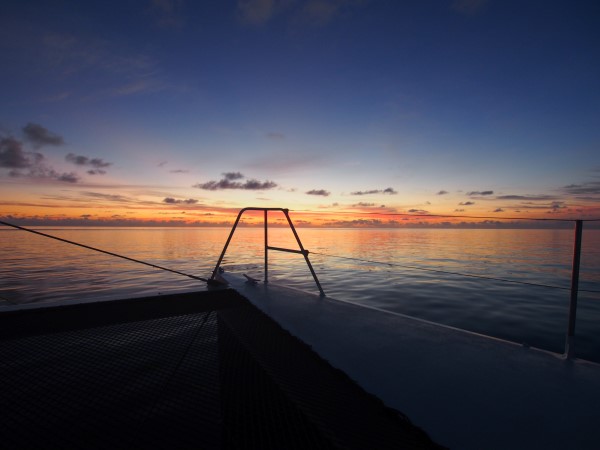 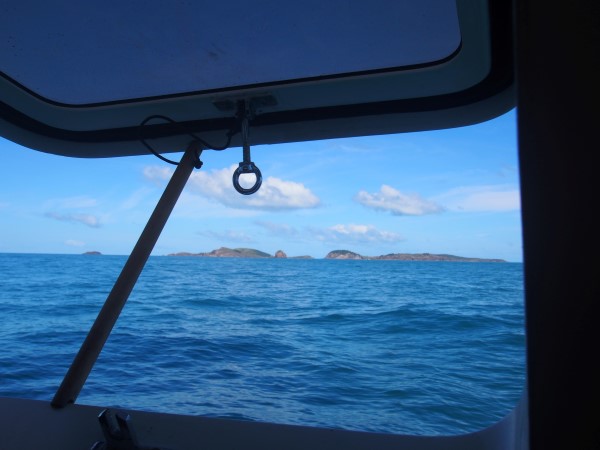 They were back burning on the mainland, which produced spectacular scarlet red sunsets 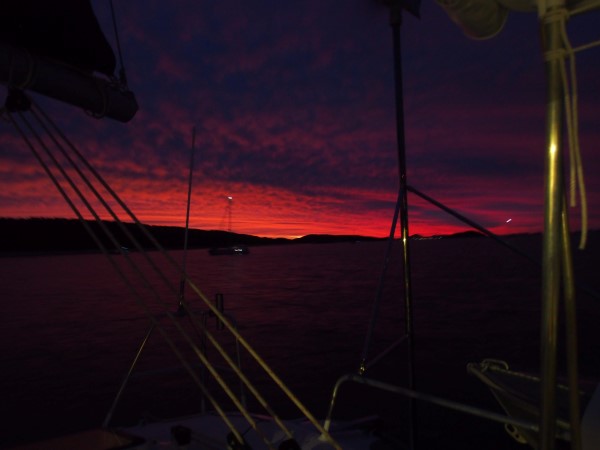 also anchored at Great Keppel Island was another Mumby catamaran, that the guy who built it 15 years ago had done a circumnavigation of the globe in, including going up to Sweden. Mark was very good company 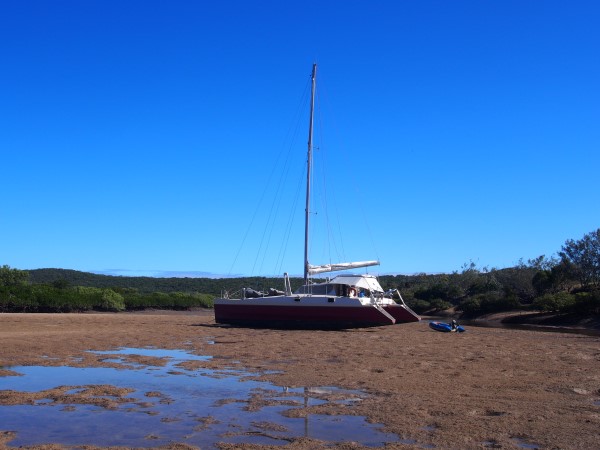 there is another weather window for going south, so I am now on route to Hervey Bay