Stuck at Lord Howe Island for a week 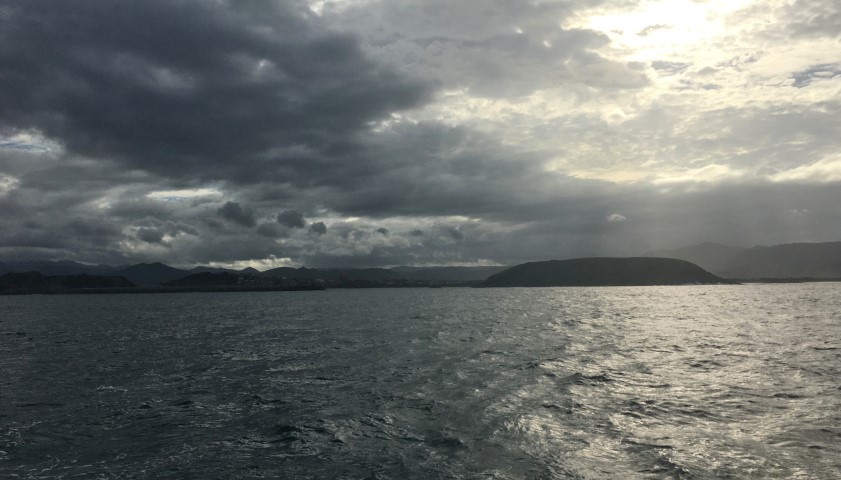 It was great to be back in passage making mode, sailing away from land, hoping more of it would pop out of the horizon, in days time.

It should have been a nice easy sail with 10kts of northerly wind 60-70degrees on the nose, but the East Australian Current, was running at 2-4kts, which resulted in Logic being hard on the wind for the 50-70miles, we needed  to cover  to get  through it. The current antagonised the swell into something that was short, sharp, and uncomfortable to sail through. 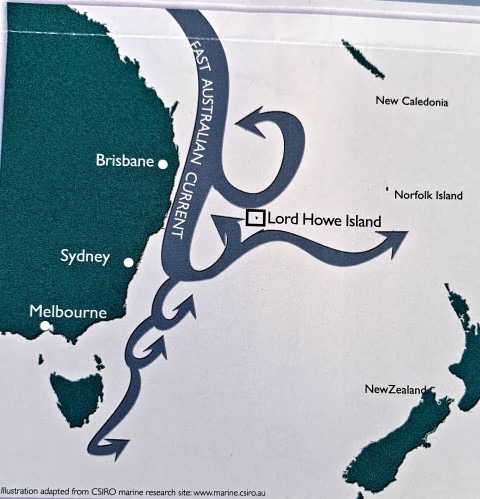 By the time the sun rose (Miriam put on the sun rising song), we were out of the current and could loosen the sails.

We now confronted numerous rain squalls moving from the north, with minimal wind either side of them and in the rainy middle, with gusty conditions on the front and back. A couple of times I had to pull away to sail with the wind, when Logic was up to 13kts of boat speed.

in the late afternoon, as the wind increased to 18kts, we put the reef in the mainsail 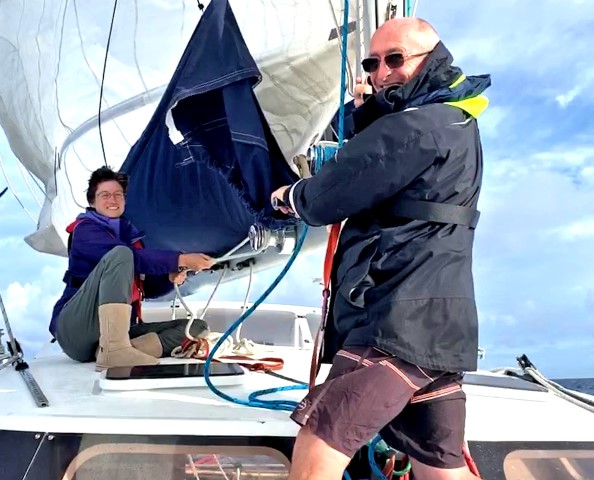 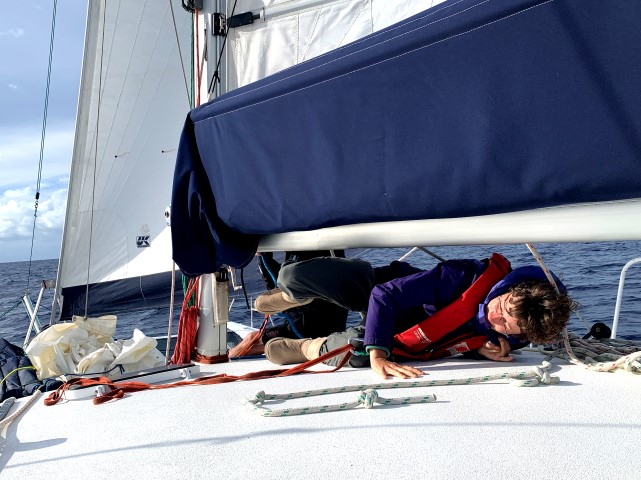 Conditions overnight were not comfortable, a young short swell from the northerly wind was now adding to the easterly waves coming out of the Pacific. When the two waves sat on top of each other, they slammed into the bridge-deck between the hulls, not enough  for a complete levitation, when trying to sleep in the bunk, but close. Sleep was very interrupted. (Champagne Sailing…….not). The current was now with us, having us doing 8-9kts throughout the night.

Soon after the sun rose on Saturday, Lord Howe Island was well in view. 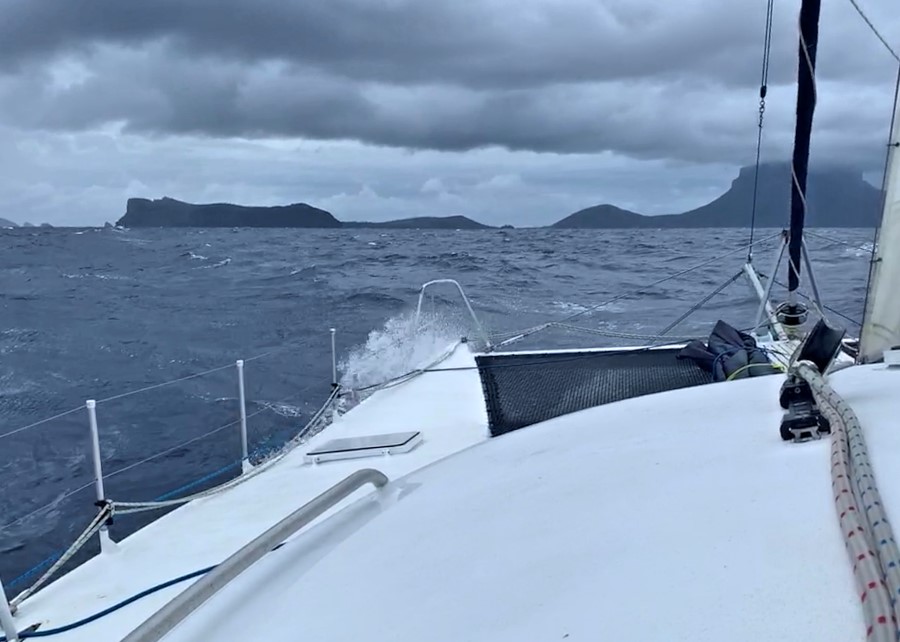 Simon the island policeman/harbour master, directed us in through the pass in the fringing reef to one of the moorings in the lagoon 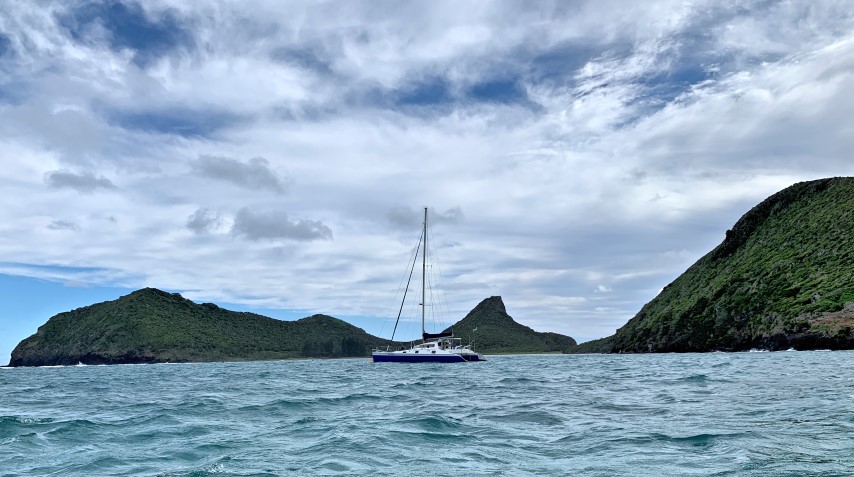 there are hot showers, toilets and a laundry in the building  beside the jetty 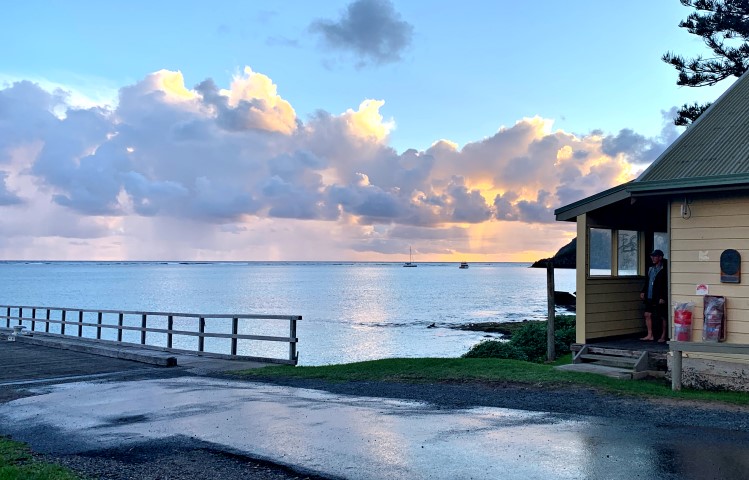 a hot shower was first on the agenda, after we had tied up to the mooring and gone ashore, next up a wash of the salted clothes 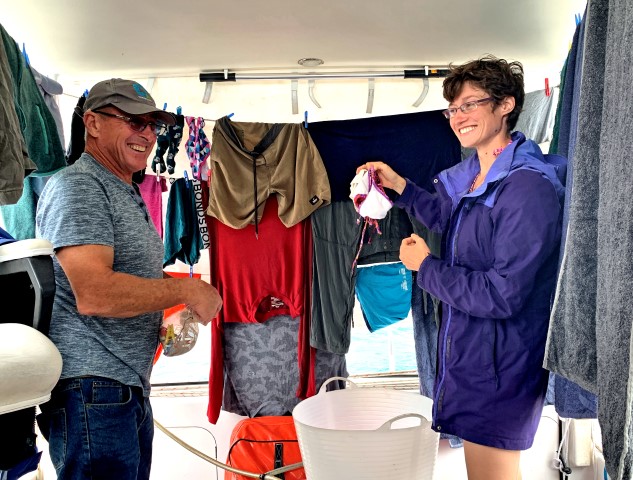 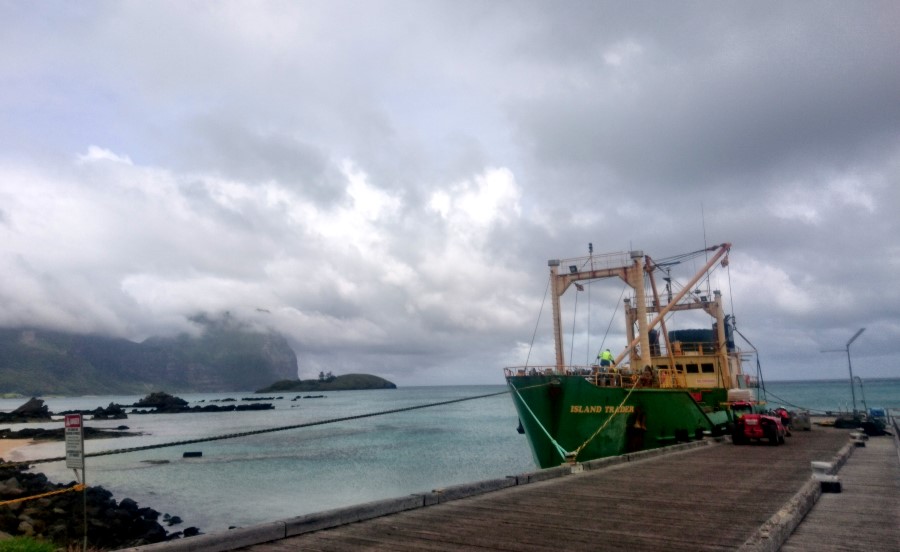 every 6-8 days a weather front goes over the island moving west to east. With a northerly wind on the front, and a westerly, going quickly to a southerly on the other side (both winds are over 25kts, with plenty of rain)

we had come over on the northerly, a day before the front, with the aim of hiding out at Lord Howe, when the strong winds and rain arrived. Then picking up the southerly to go north to New Caledonia.

So after a lovely hot shower, it was time to address the sleep debt, while the wind howled and the rain poured. Unfortunately the weather forecast post the front, did not follow the script. 3 days of light wind motoring, then a North Easterly on the nose. Forcing us to wait for the next front, which looks to be following the script, with 15-20 knots of wind on the beam, all the way to Noumea.

Forcing us to spend 7-8days at Lord Howe.

Miriam enjoys cooking as much as I do 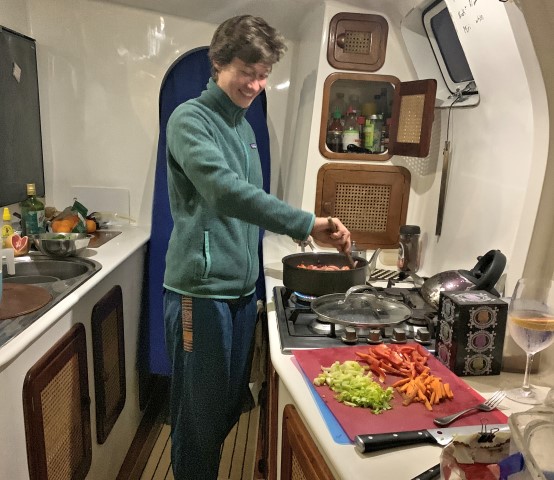 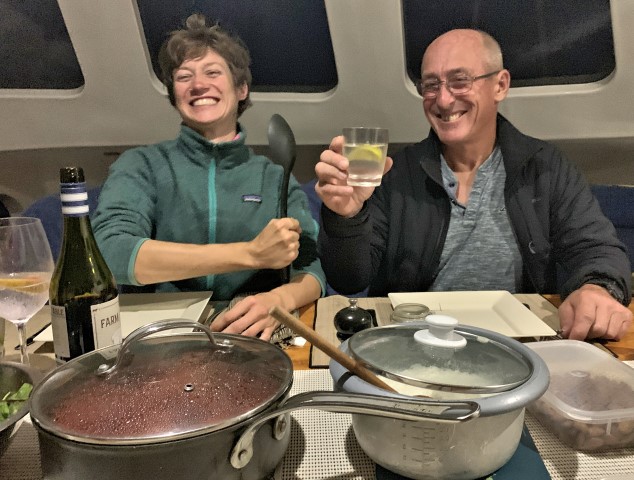 Albert was busy running us too and from Logic 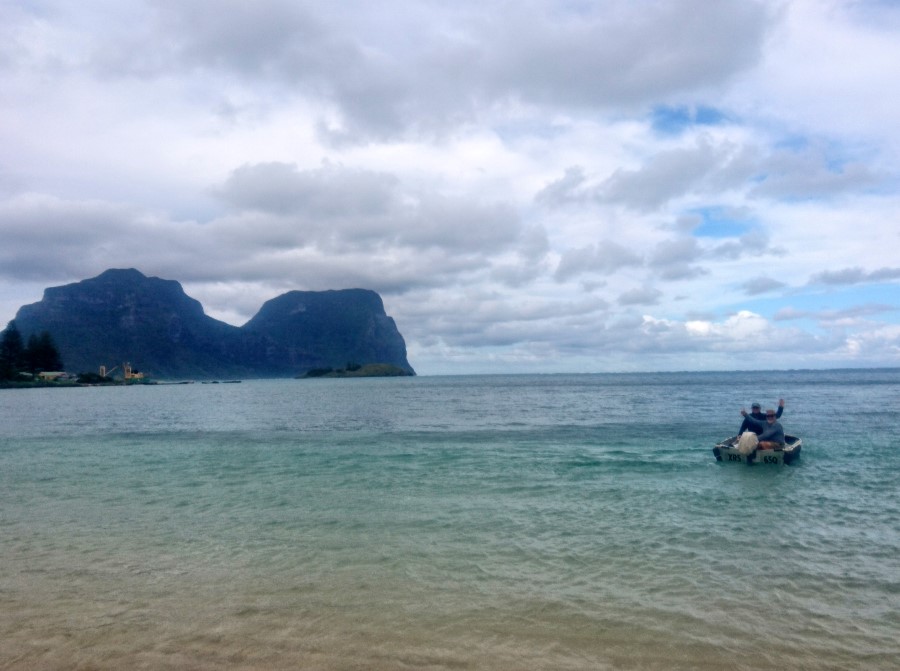 Miriam did the big walk to the top of one of hills to the south, for this photo 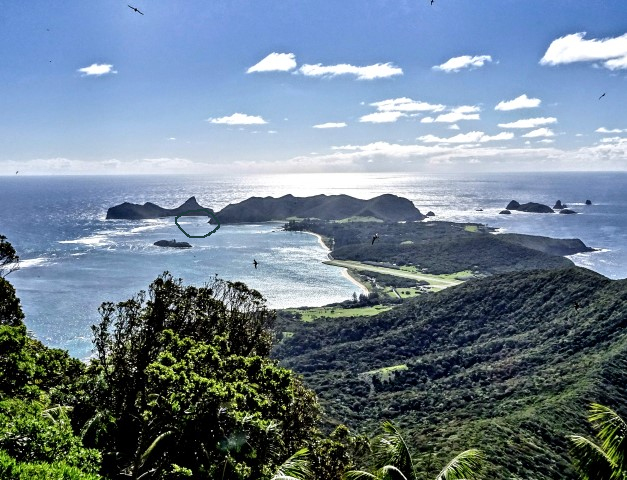 I checked out the surfers on one of the eastern beaches 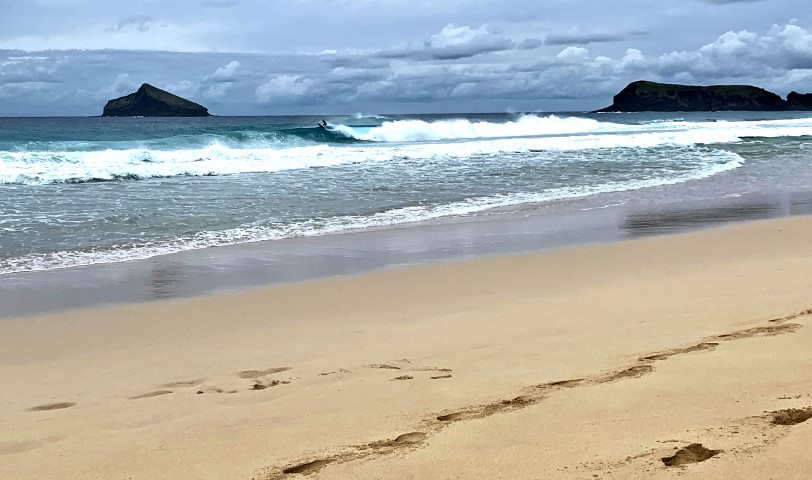 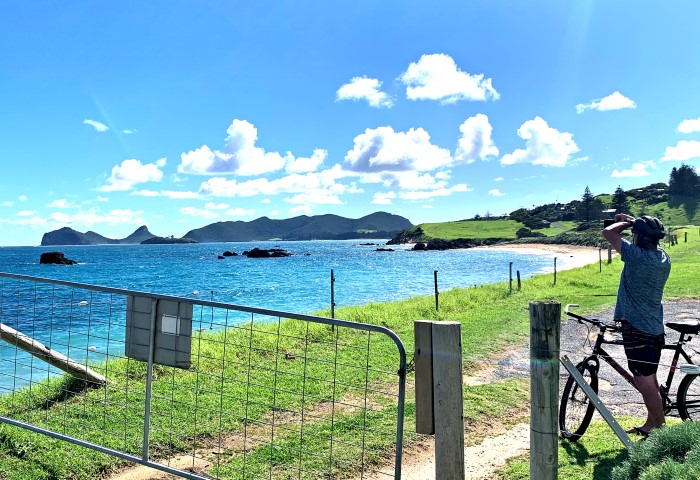 going past the airstrip 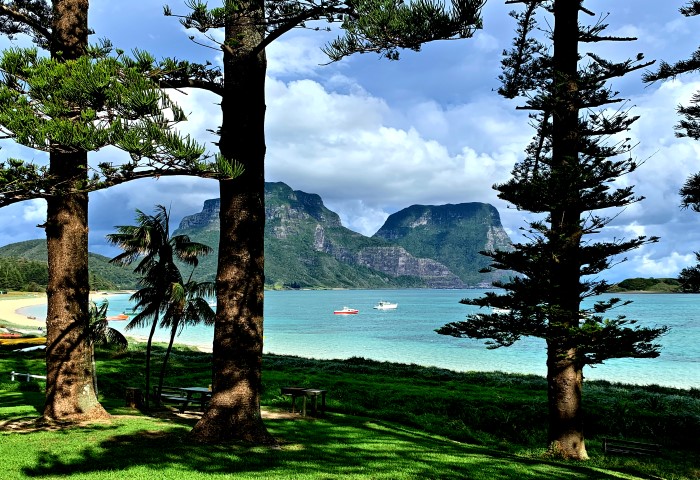 there were plenty of rain squalls going through with associated rainbows 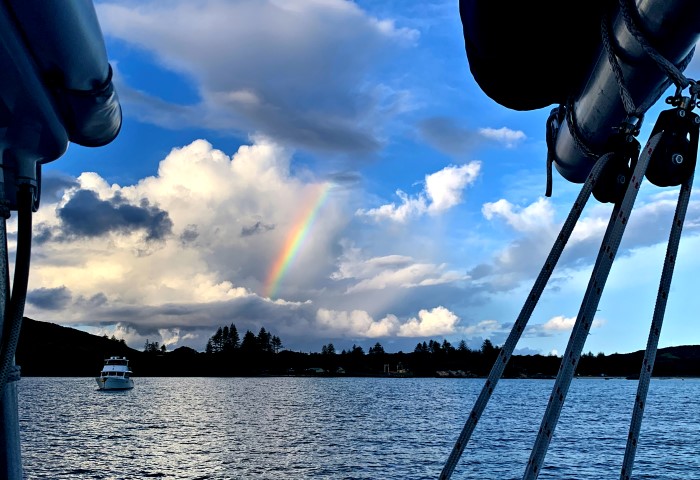 It is time of the year were the fledgling mutton bird chick come out of their burrows and take flight for the Philippines. This one crashed into the sea and could not get back in the air, so we took it ashore for another attempt at flight. 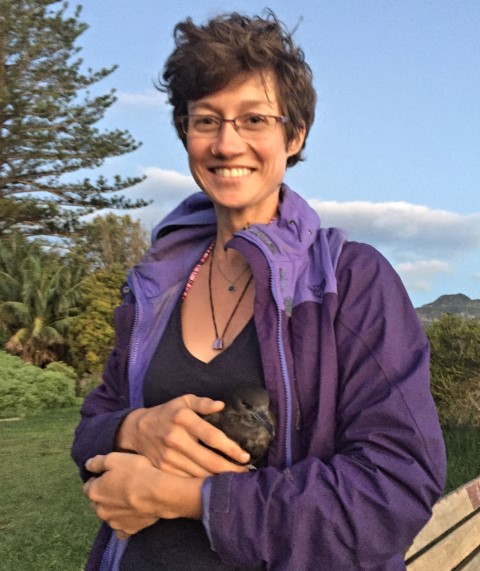 there is a rat problem on the island with the rats and mice eating the migratory seabirds, eggs and chicks in the nest, so the government has allocated 12 million dollars to a rat eradication program. Which included 27 thousand rat baiting stations, at 10 meter centres. There are people everywhere setting the traps, all with GPS locations. Plus groups of guys with nets and currawong calls on their smartphones, catching the currawongs to keep them in aviaries until the baiting program is over. 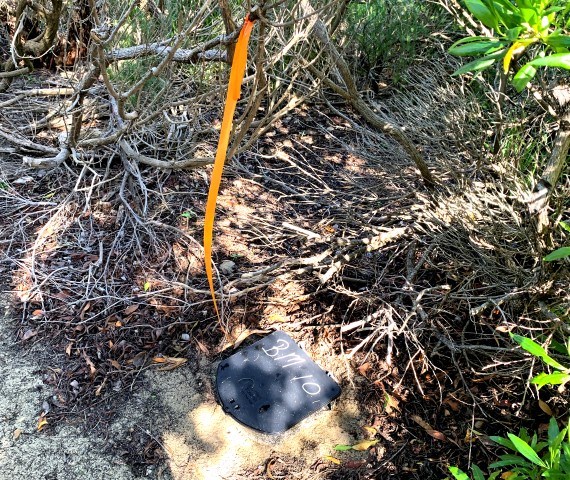 we got in a snorkel on one of the semi-fine days, but there was still a decent swell, so the visibility was not great 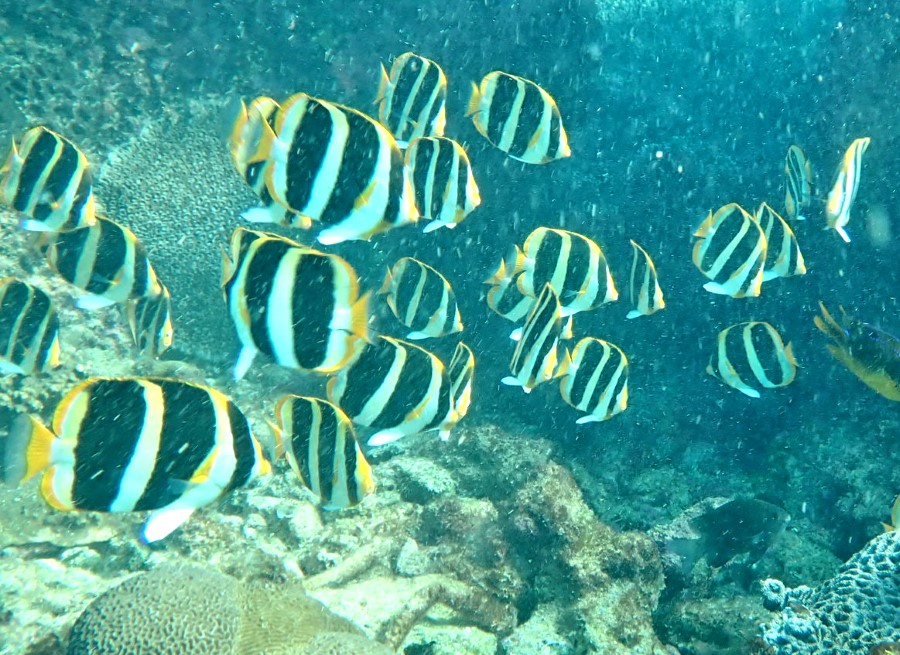 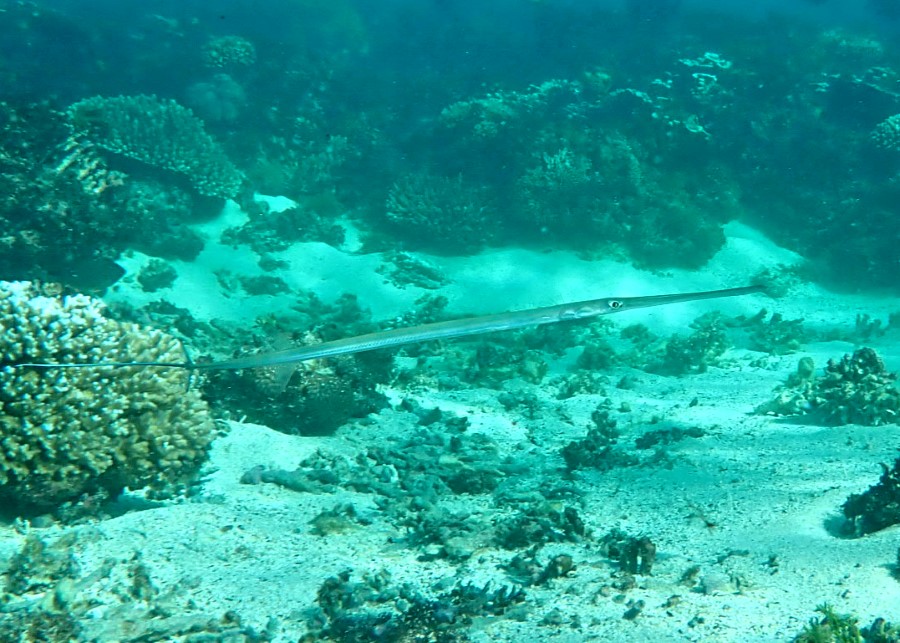 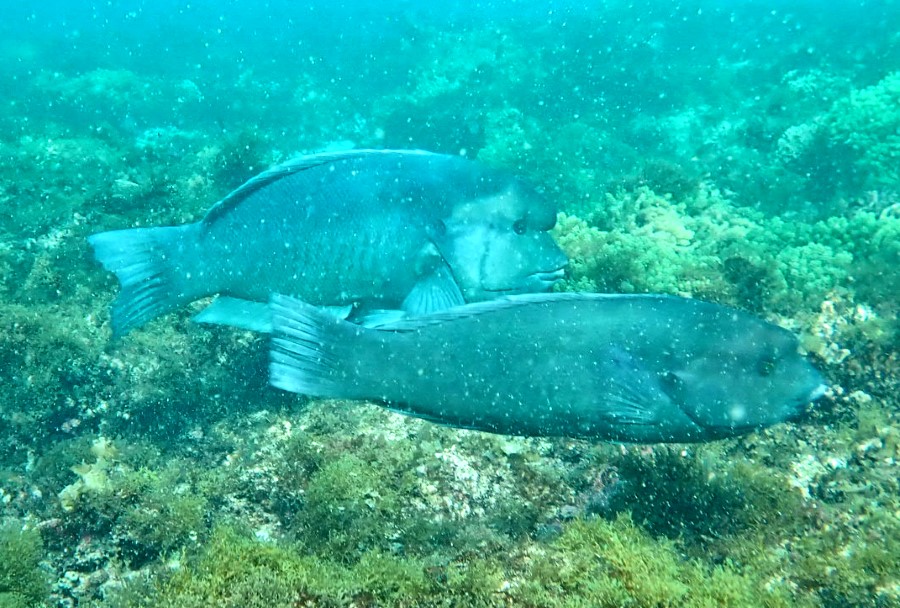 as happened when Logic was here last year, the gusty weather front blew off one of the pop-out forward bimini windows (luckily this time it did not break a couple of wind generator blades on the way past). Miriam is a trade qualified boilermaker, and relished the idea of having an angle grinder in hand, to cut out a new polycarbonate window from the blank, that was stored under her mattress. 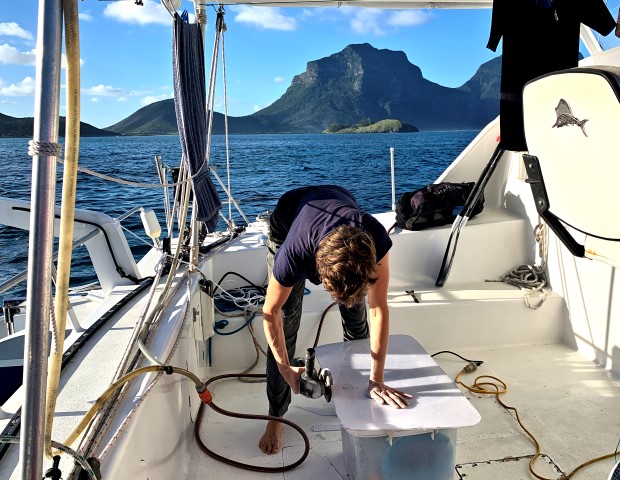 an alternate definition of yacht cruising in “repairs and maintenance in exotic locations“.

With the front coming over on Saturday morning, I swam down and inspected the mooring 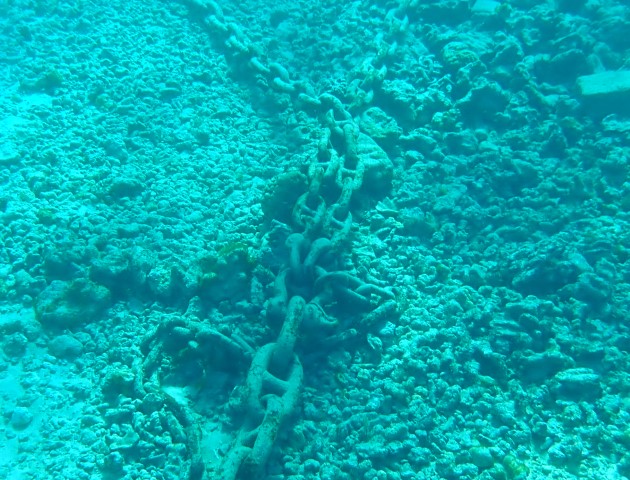 Logic will be safely tied up to this enormous chain.

One morning (after it blew all night), the conditions were perfect to climb the hill to the north of the anchorage and take this photo. 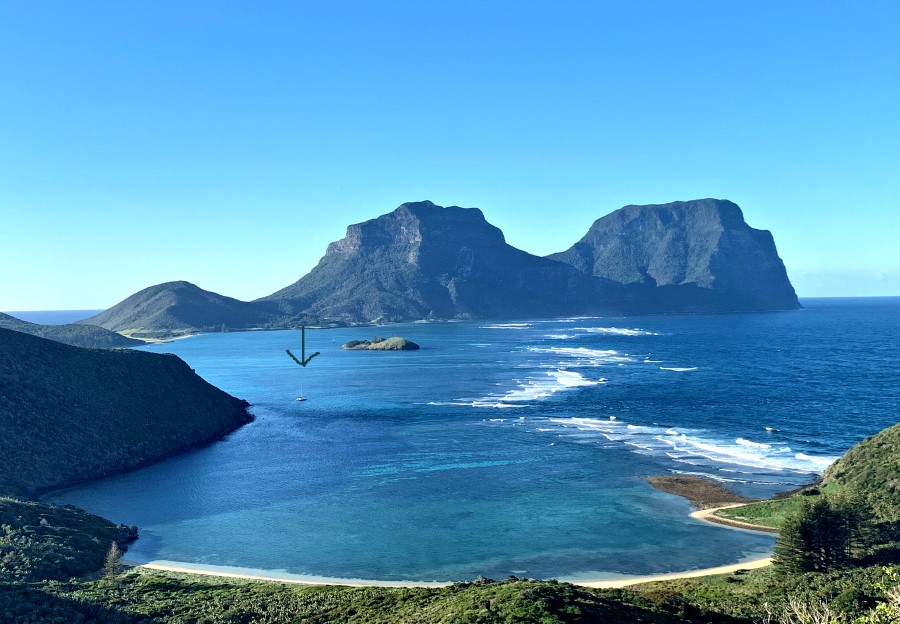 it is very easy to see the passage I brought Logic in through and the waves breaking on the reef that serenade us to sleep at night. We went over to Ned’s Beach and fed the tames fish 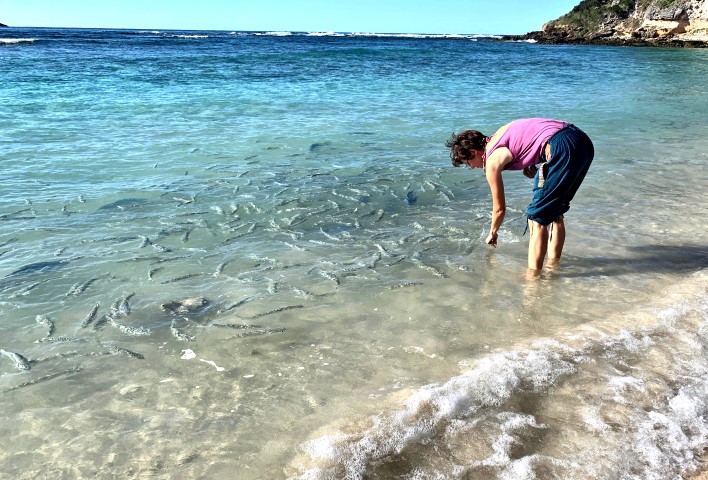 and made the most of the one good weather day, by going up to North Bay to make use of the BBQs 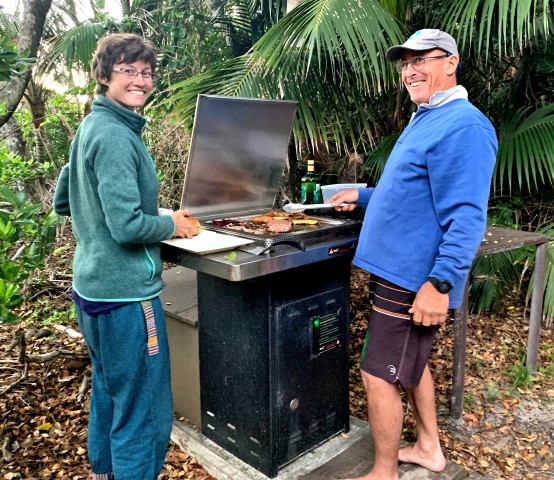 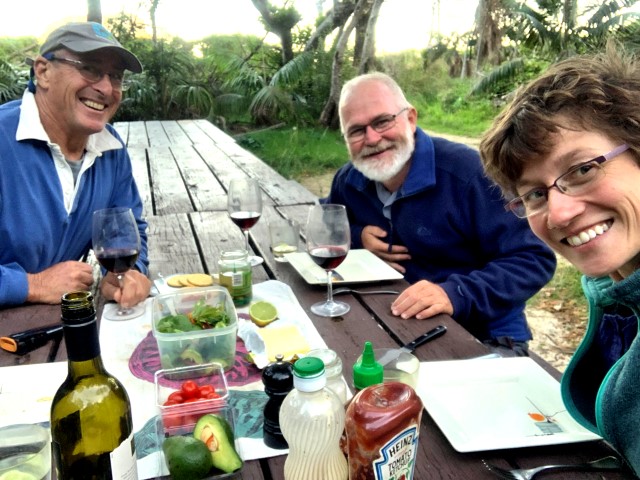 The weather forecast is looking perfect for us to head off to Noumea, New Caledonia, on Saturday. 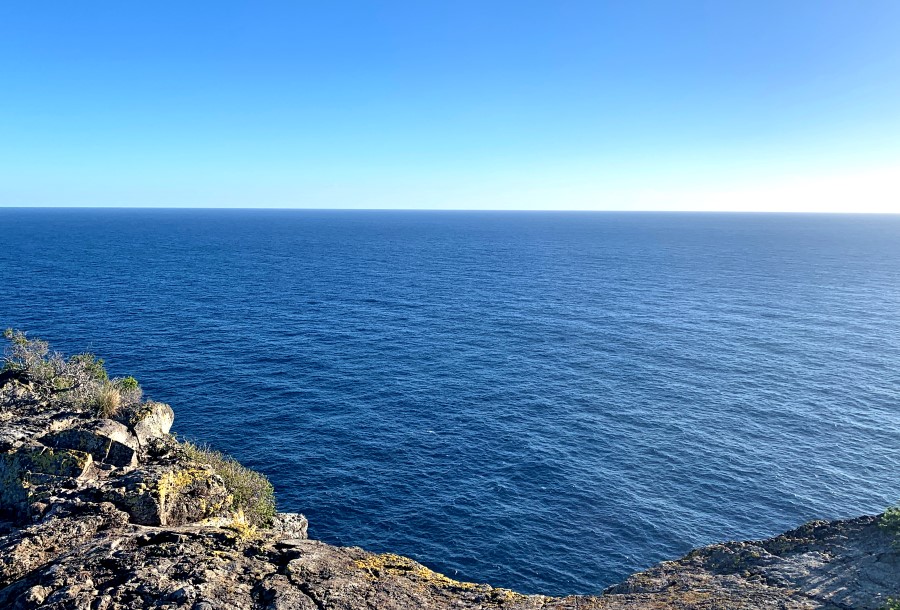 time to sail back over the horizon