over to Uri Island, for a belated Birthday party

On my last trip to Vanuatu, I formed a strong friendship with Karl, his wife Nora, and their 3 daughters, Elizabeth (8yo) Jeanie (6yo) and Dorthey (3yo).

When Karl saw on Facebook that it was my birthday, he sent me a message, that we would celebrate it when I got to his home island, Uri, a small island off the eastern coast of Malekula.

I left Pentecost, at first light the day after the Land Diving to cover the 48miles to the east, to Uri.

Karl, Nora and the girls were waiting to great me when I went ashore

they had made lays to go around my neck 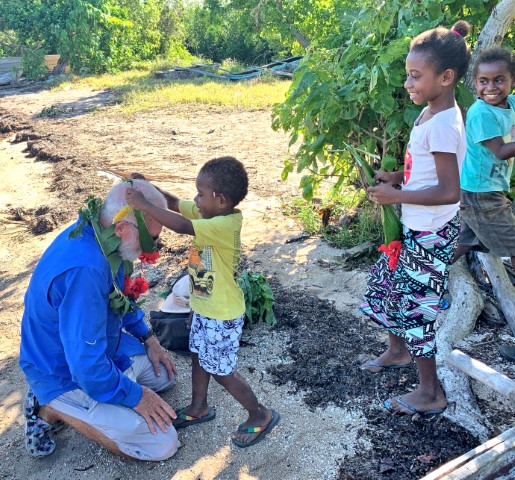 my daughters had given me Christmas present to give the girls, so first up, in keeping with my bushy white beard, I became Father Christmas. 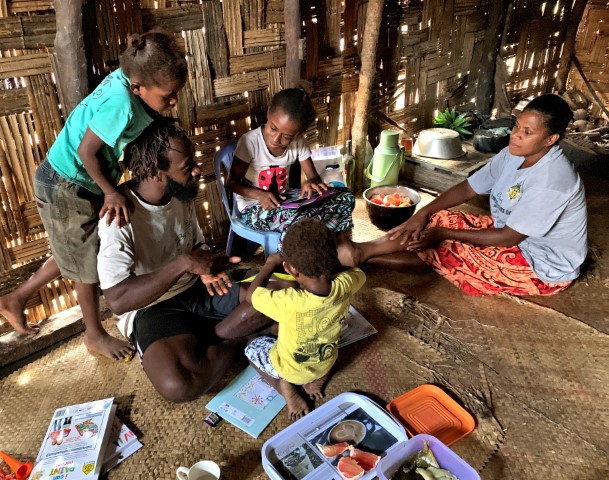 anyone who has ever had children, has fond memories of excited children opening their Christmas presents.

I was tired after a 7hr sail, so Karl, Dorothy and Jeanie, took me back to Logic in Albert 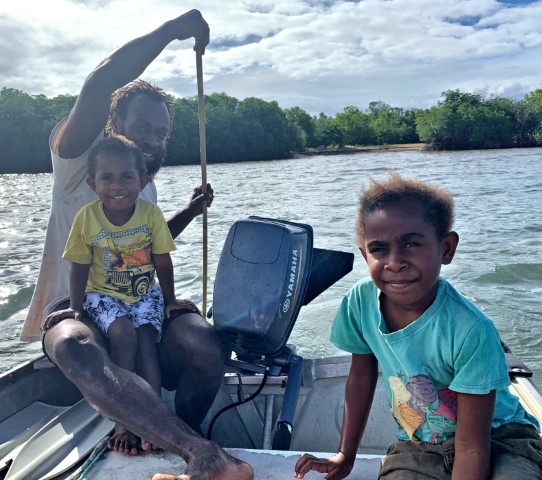 Then Karl, took Albert, over the to next island 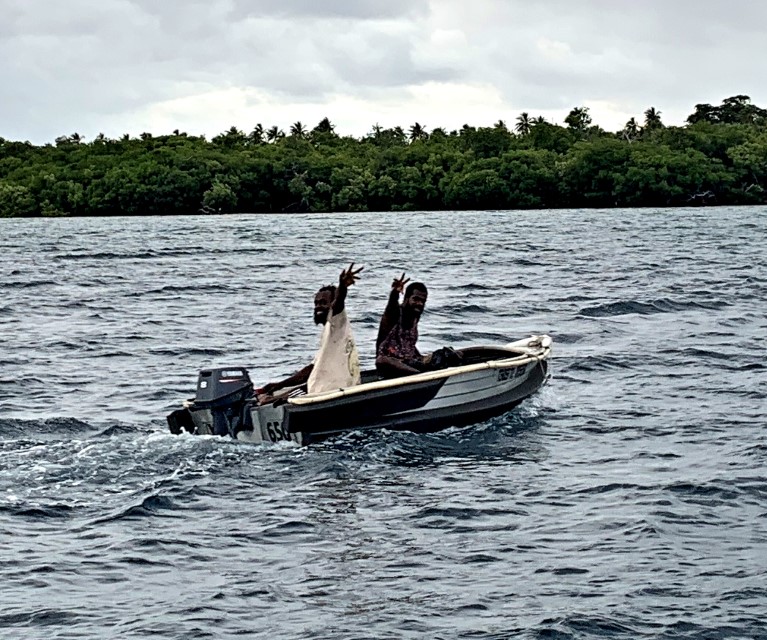 to pick up the pig, for my birthday banquet 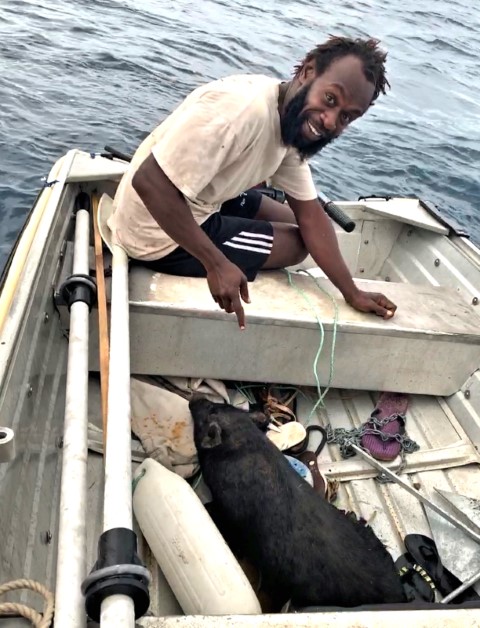 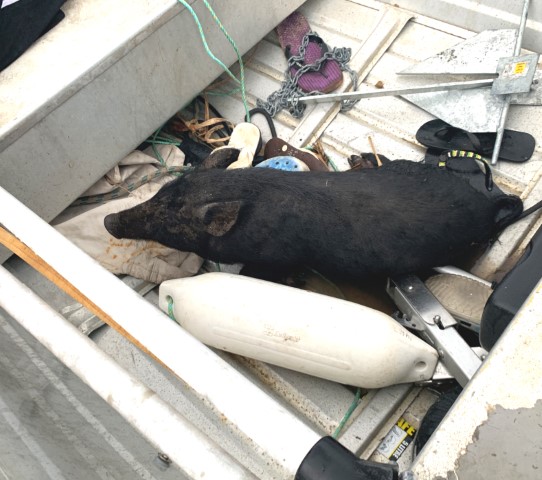 (I left the cleaning up of Albert after the pig transport, to Karl)

The next morning we were off to the market on the mainland (Malekula) for banquet provisions.

Nora and Dorothy were dressed in their finest Nora sawn dresses, for the occasion 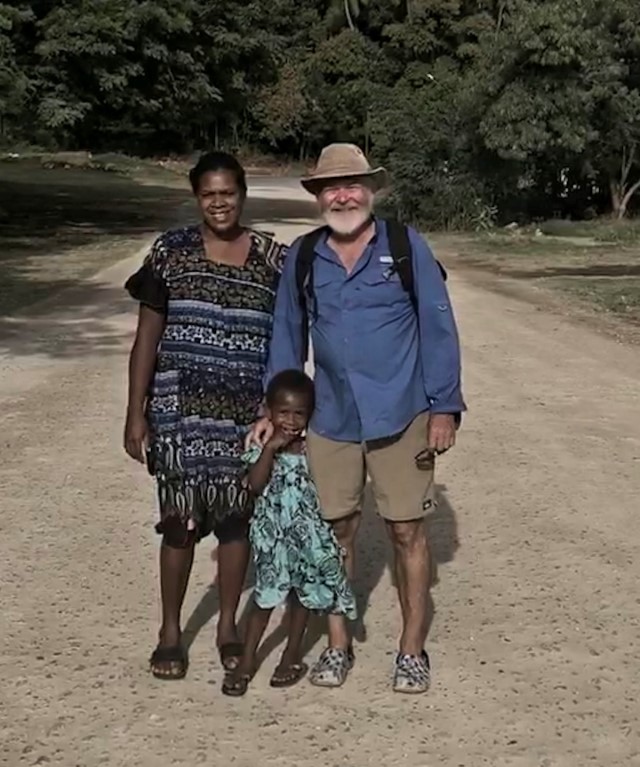 In Australia, if one is having a birthday party you are expected to provide beer and wine, in Vanuatu it is Kava, that I needed to supply. Luckily there is very good Kava grown in the northern Highlands of Malekula by the Big Nambas tribesmen (the tribe from the northern end of Malekula have big penis sheaths as their traditional garb and the Small Nambas from the south have small penis sheaths).

Like stall holders for markets everywhere, the Big Numba men, left home at 3am in the morning to go to the market to sell their Kava (dressed in western clothing). 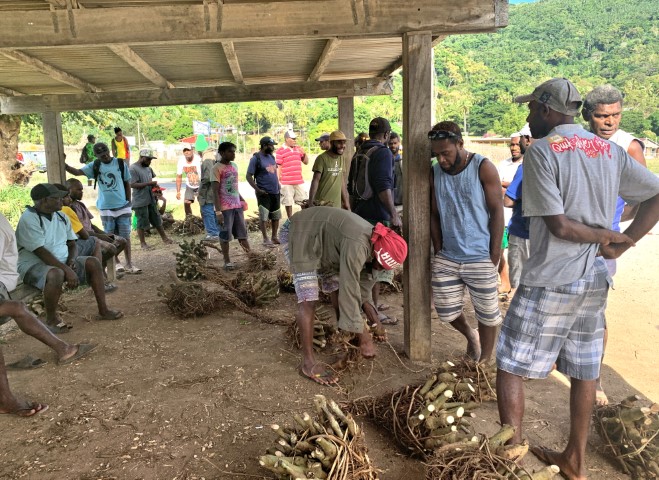 Kava is big in Vanuatu, inevitable wherever it is for sale, there are a heap of men, in close proximity checking it out and “chewing the fat”.

Karl did the purchasing of 3kg of Highland Malekula kava root 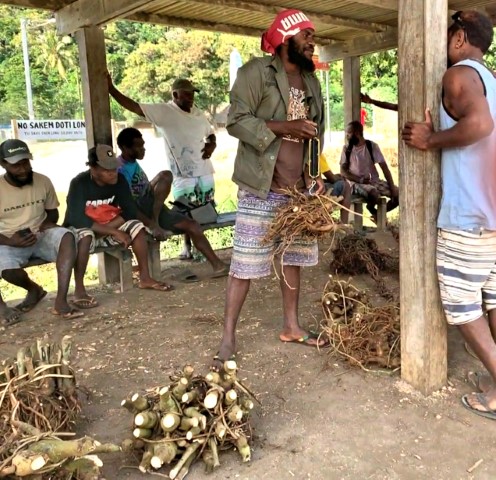 we got a lift back to the jetty, in the back of a ute (as one does in Vanuatu) 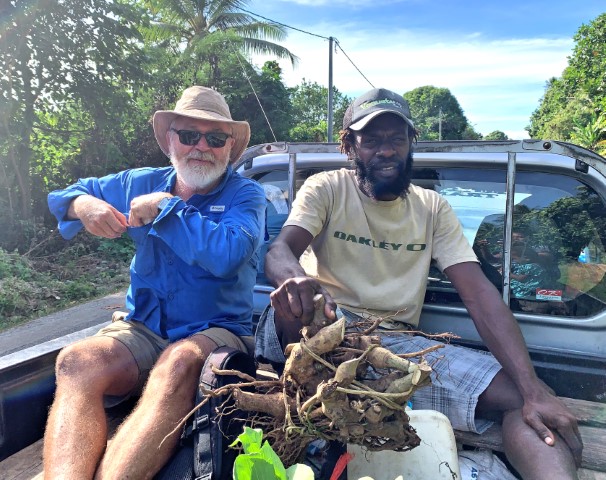 a 15 minutes ride in Albert and were back in Uri, and my birthday pig

which needed it’s hair burn off, before it could be cooked 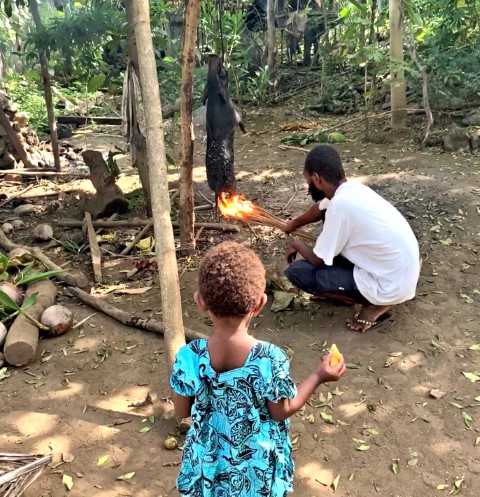 after which, Karl rubbed it down with green pawpaw to remove the smoky taste

then it was seasoned 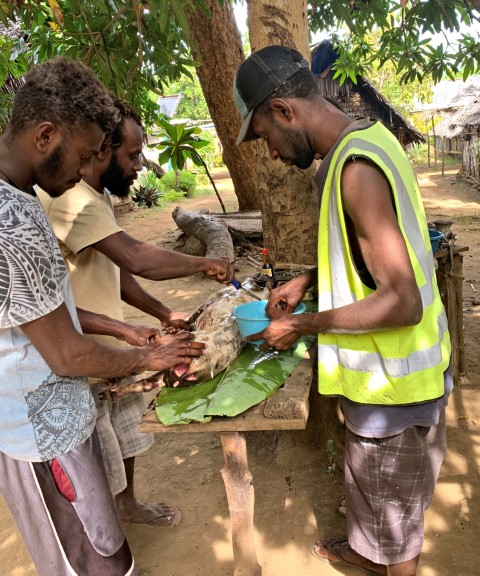 before being woven into a coconut leaf 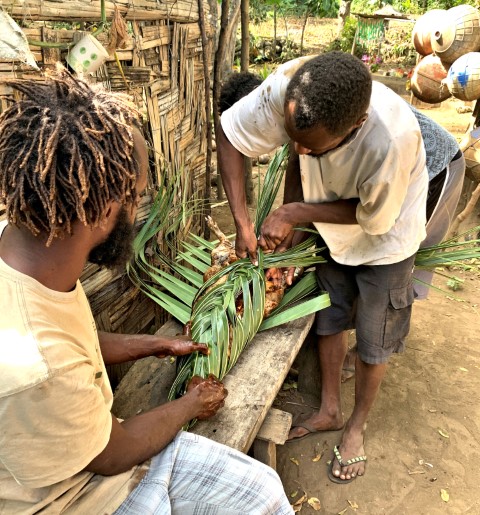 then into the preheated oven

while all this was going on, the boys and I pealed the root vegetables 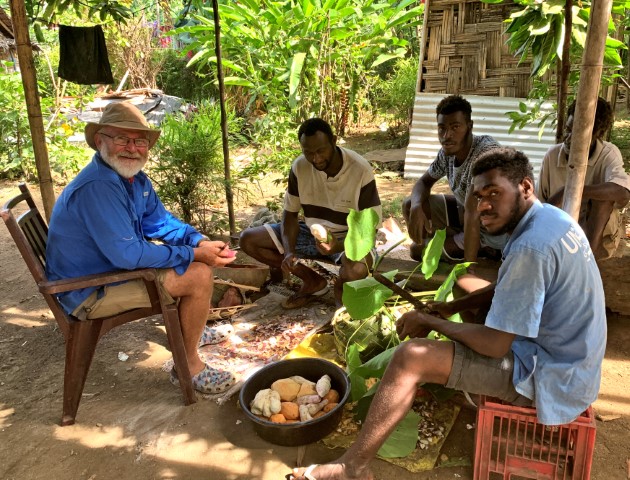 Nora prepared a laplap to cook the vegetables

I had caught a 6kg Mahi Mahi, on the sail over from Pentecost, which went in with the vegetables 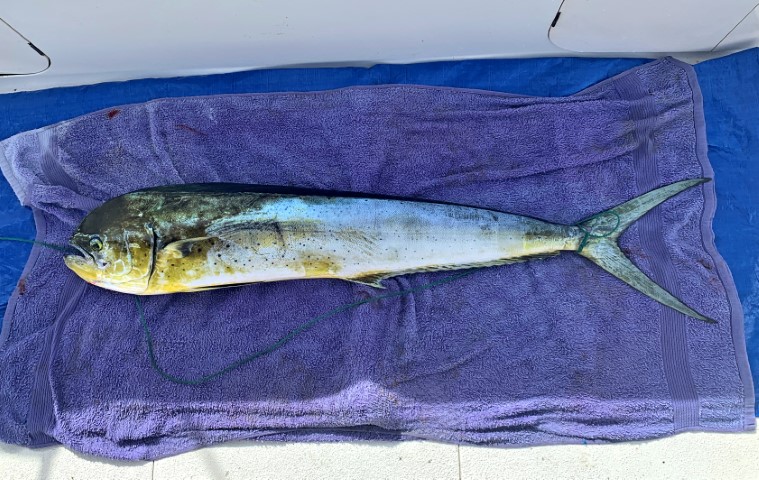 then it was time for the laplap to be  folded over and tied up, tight

Then onto some hot coals, before preheated laplap stones, were placed on top 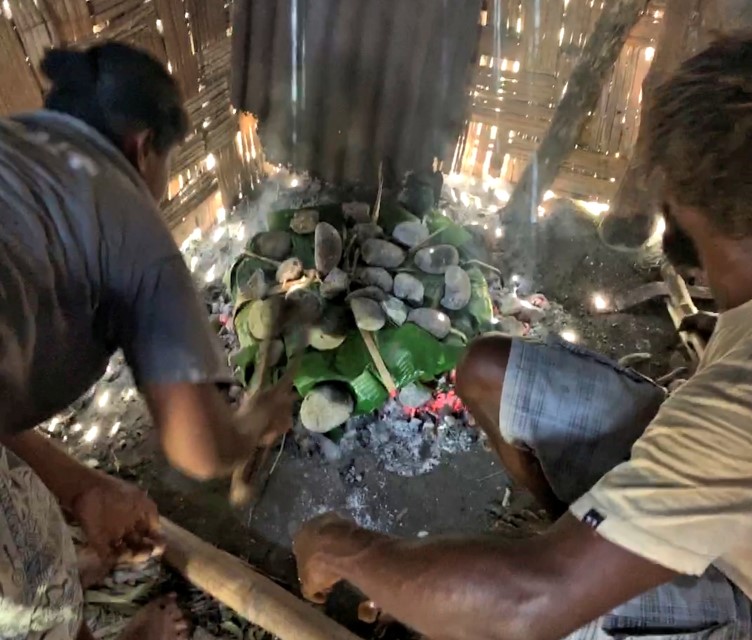 fern leaves, were placed over the top, to keep the heat in 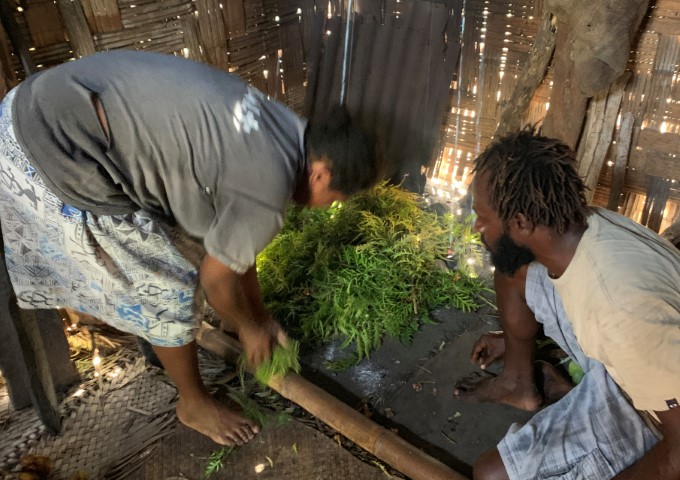 Karl and Nora, moved into the family home, after his father died, late last year. The Ni-Vanuatu cultural norms are very different from ours. Karl’s father’s tomb is just behind the house, and was a central part in  our afternoons  banquet preparations 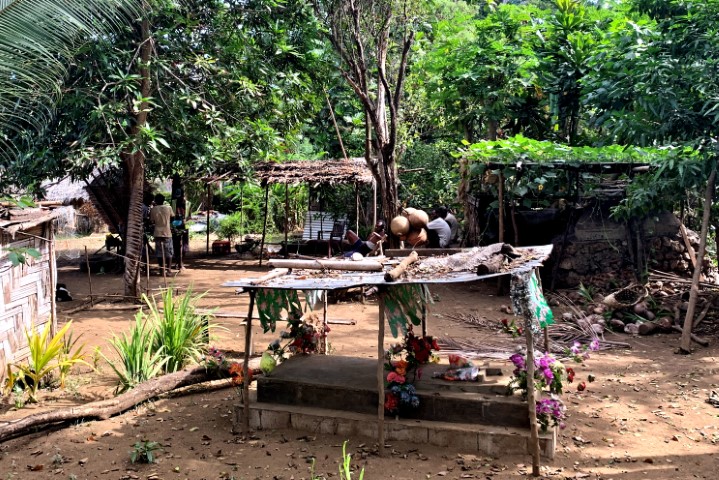 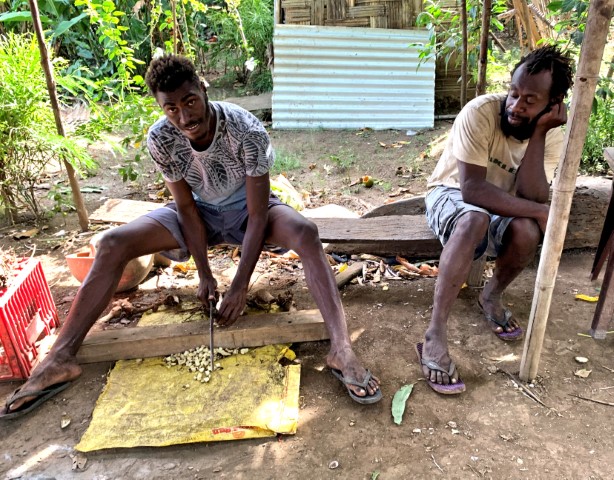 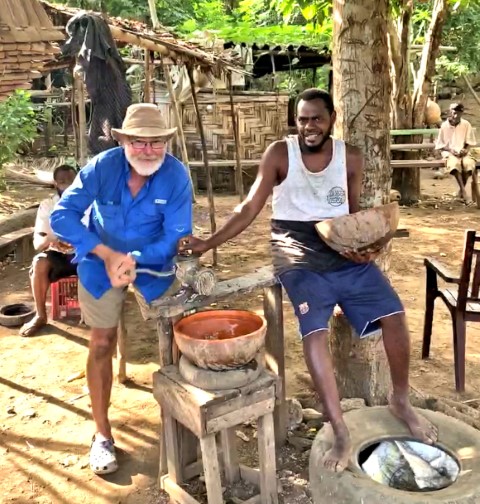 then the ground kava root, was placed in a permeable cloth bag and the active ingredients washed out 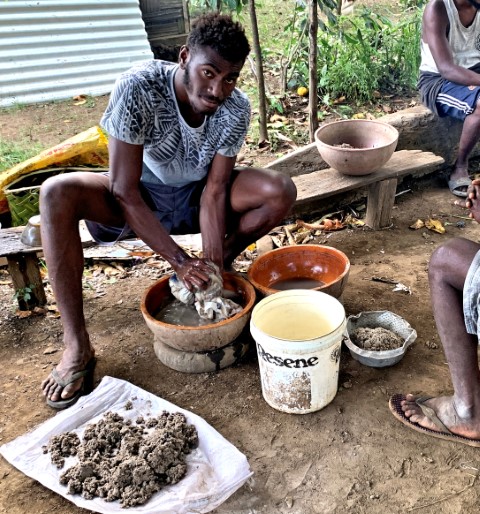 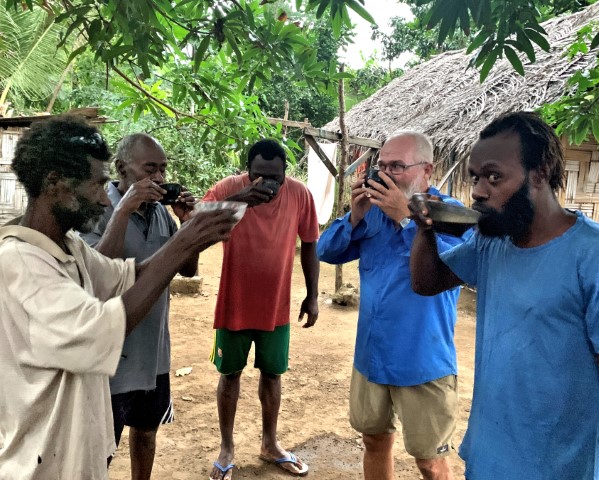 earlier this year, it took me a few months to get use to drinking warm British beer, hopefully after a few more months in Vanuatu, kava starts appealing to my taste buds, but there is a long way to go, yet. 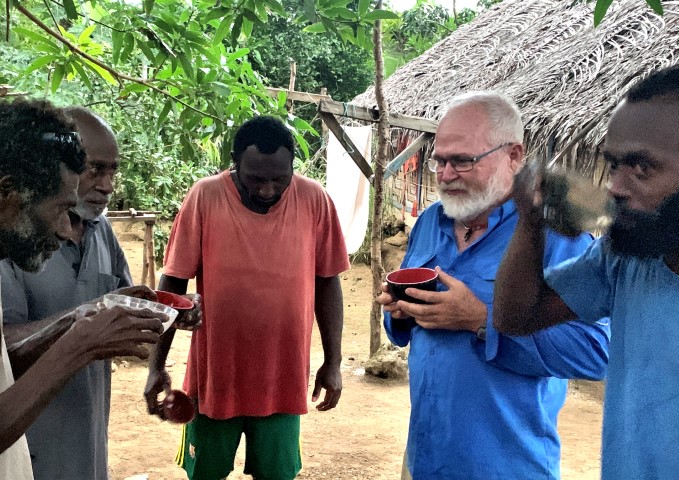 my pig was cooked 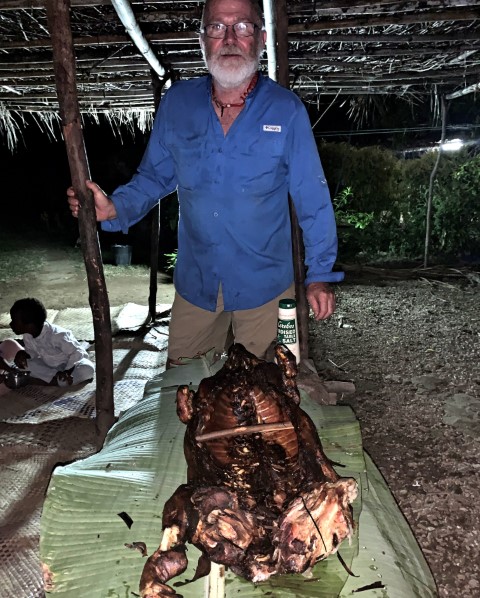 then the cake came out 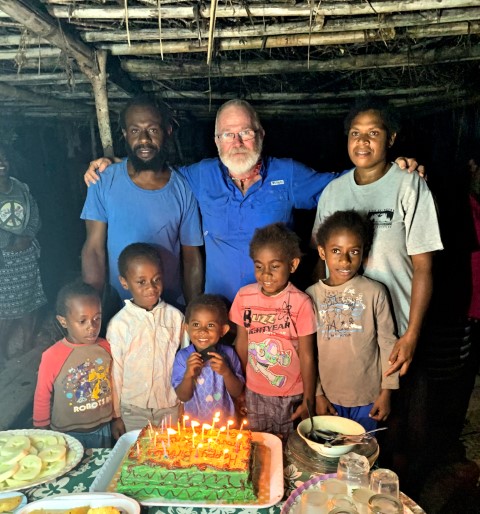 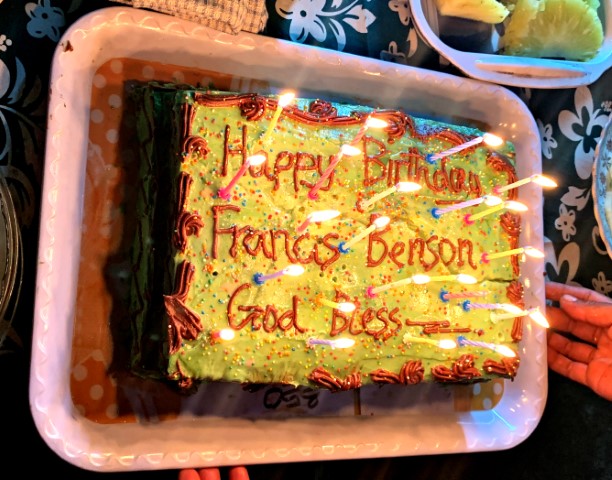 Nora has given Karl a leave pass to come with me on my next adventure, north to The Banks Islands, which should last 3-4wks. It will be a lot of fun