The passage from New Zealand to the Minerva reefs was a lot more challenging than the run over from Australia to New Zealand.

In hindsight, I would have probably waited for the next high pressure system to come over, rather than take the one that we did. But we had already passed on the last 3, we were getting marina fever, and Kat and Mat’s New Zealand visas expired after the first aborted weather window departure.

For the entire 800mile the only foresail used was the staysail, the Screecher was firmly tied down to the side of the trampoline and the genoa was firmly furled. The most the main was un-reefed was the second reef, alternating between the 2nd and 3rd reef (after the 3rd reef the next option was no mainsail up).

We left with a strong wind warning, dead astern, averaging 9.5kts for the first 6 hours. 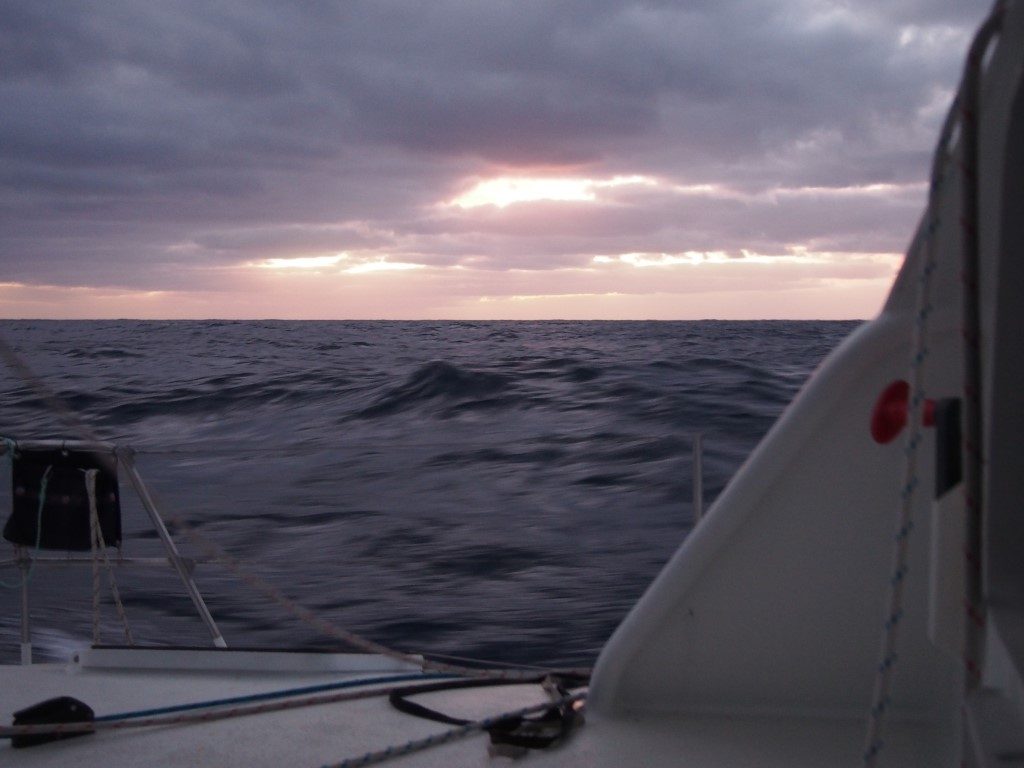 The wind then swang to aft of the beam, which wold have been great for doing big mile days, except the swell was very very confused, there was the developing South Westerly swell from the offshore strong wind warning, the left over Northerly swell from the front that had just been through, and the 3mt easterly swell moving across the Pacific Ocean. Take the boat speed over 8kts and the bridgedeck slapping/thumping from the waves sitting one on top of each other was very disconcerting, so I went with the third reef and the staysail to slow the boat down. 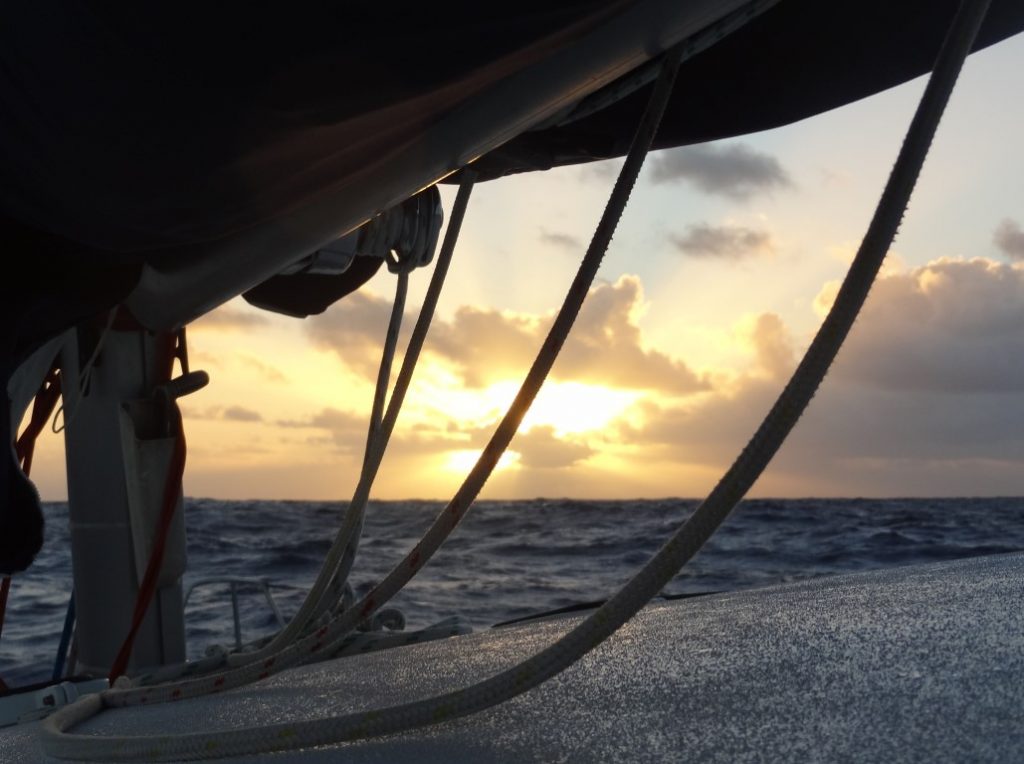 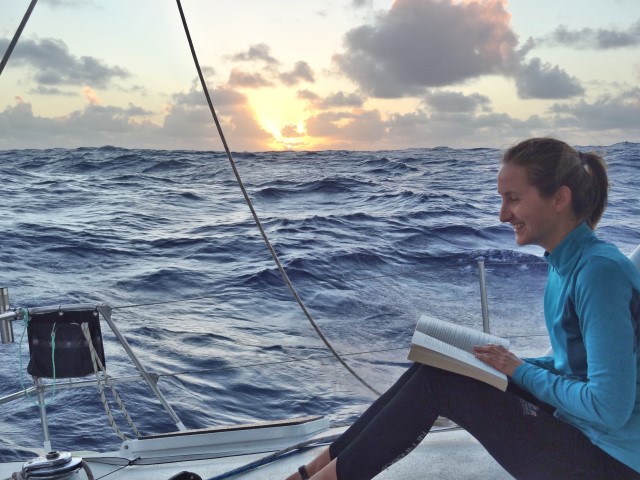 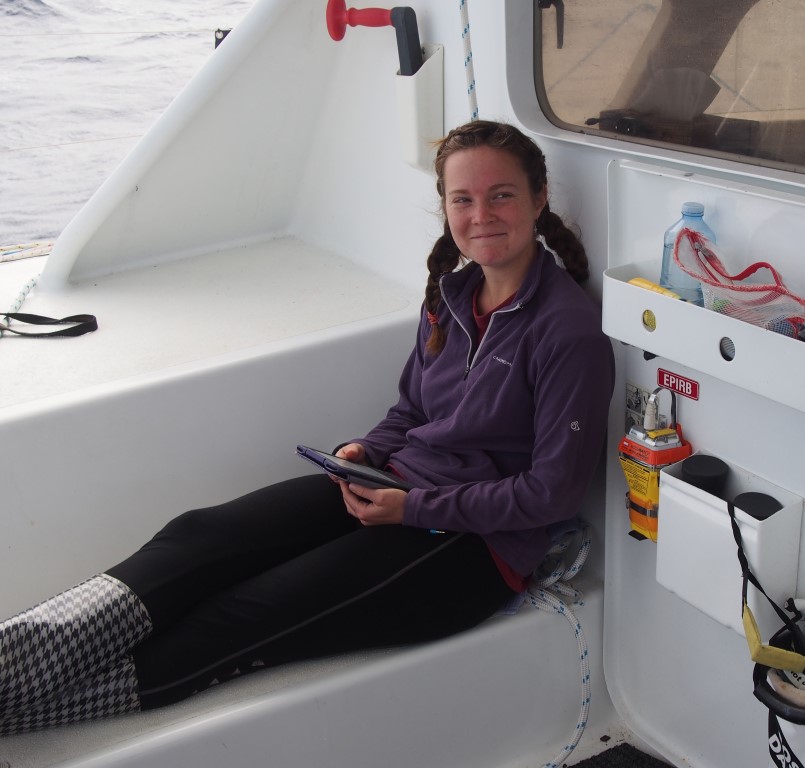 We then moved into the edge of the low pressure system that was sitting below Fiji, where the wind was in transition, with very variable wind speeds. The boat would get up to a scary 12kts with the second reef, in the gusts and a miserable 4kts in the lulls with the 3rd reef in. The number one rule of catamaran sailing is set one’s sail area to the gusts. The next 24hrs were very frustrating, putting a reef in, taking a reef out, powering up the main, depowering the main, and the giving up in frustration and turn the motor on in the lulls, to enable me to get some sleep. 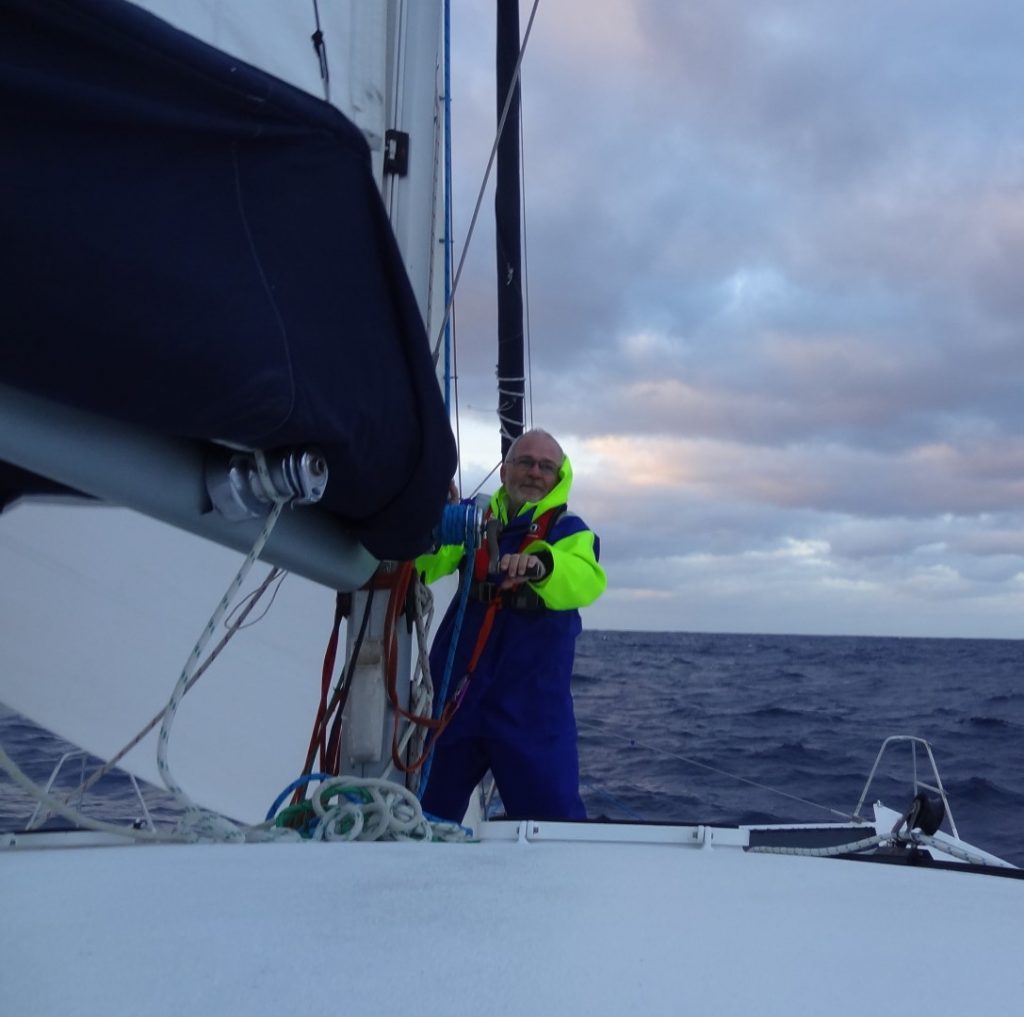 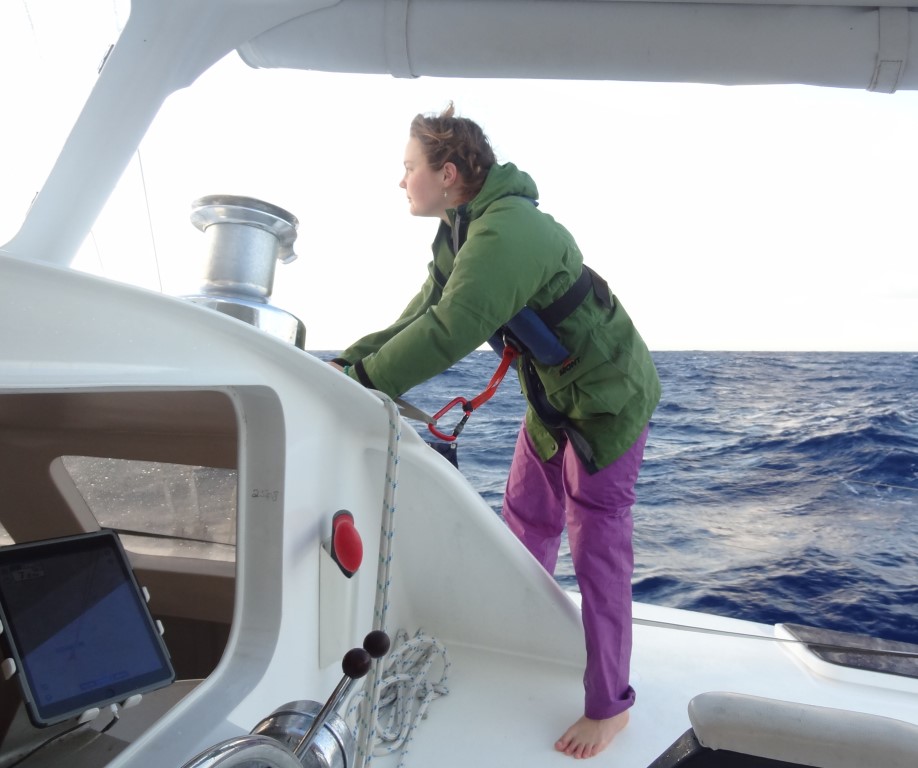 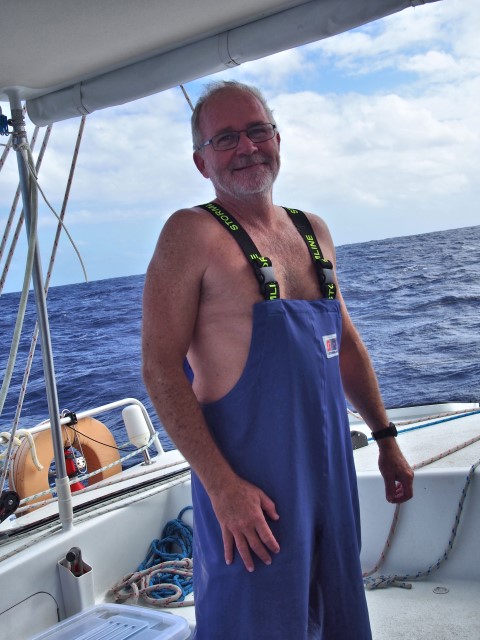 The wind speed finally stabilised and I could loosen the reins on Logic. Or so I thought, except by now in addition to the 3mt Easterly swell there was a NNEly swell. When the NNEly wave sat on top of the Easterly wave, it slammed into the leading edge of the bridge deck with an almighty wack. While I have confidence in the structural integrity of the hull and rigging, 500 miles from any land is not the place to give it this sort of a test. So the main came down and we slowly motor sailed with just the staysail up, keeping the speed around 5kts. 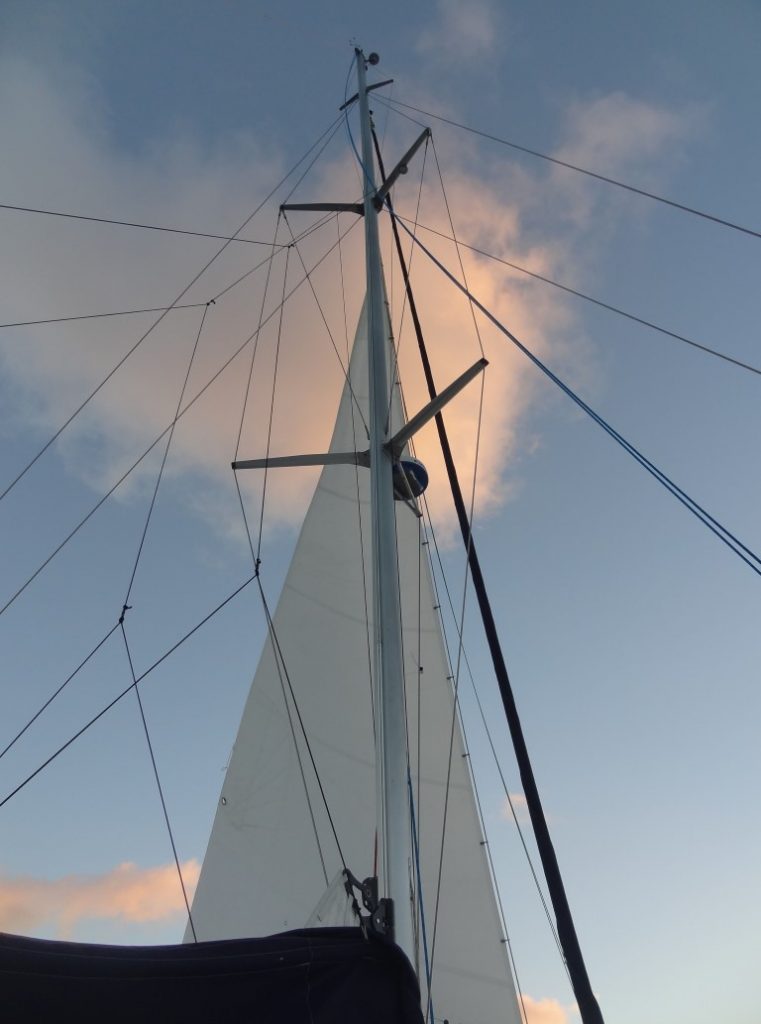 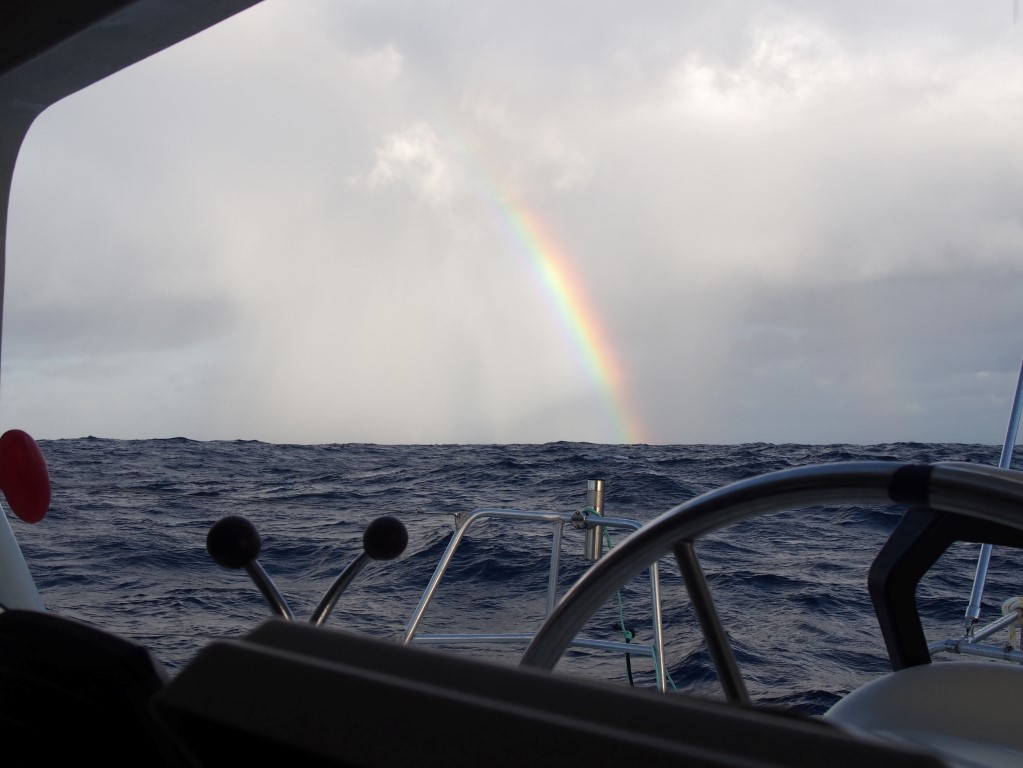 Then in the morning the secondary swell was gone, and we could crank Logic up to 200mile day speeds for the last day. 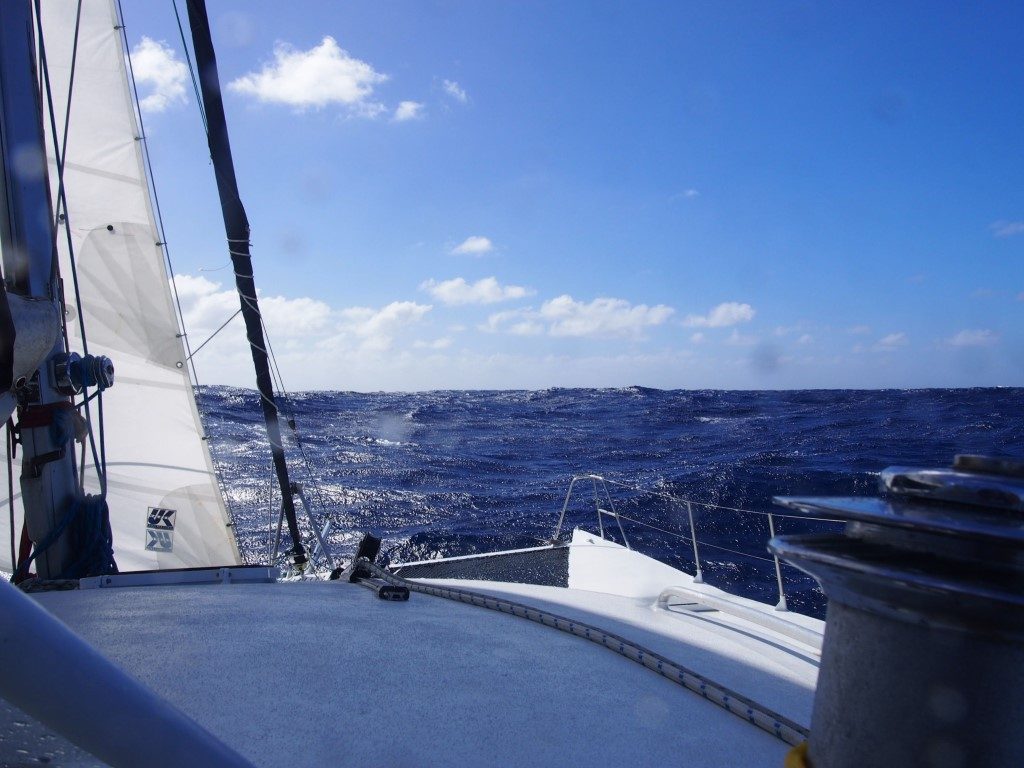 Initially with the 3rd reef in the main,

then the second as the wind died a little.

We ended up covering the 783 miles from Opua to South Minerva Reef, in 5 days and 2 hours, at an average speed of 6.4kts.

Not a very fast passage, but nothing broke. Over the VHF we listened in on the casualties from other boats that has left at the same time, broken mainsail batten cars, ripped top of mainsail, hot water scalding from the galley, and a boat had their mast come down.

Learnt a lot and now have a few more stories to tell at the bar.

Cyclone Ella told us to wait for the next high