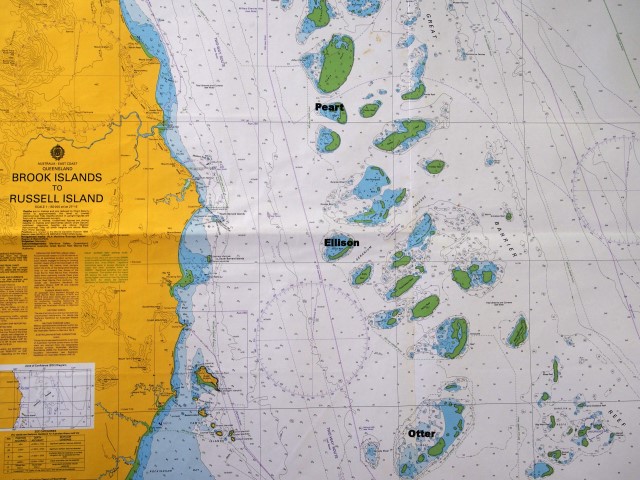 Off most of the Queensland Coast there is an underwater plain, at a depth of 20-50mt, running out 30-50miles, then it gets to the continental shelf, where the depth suddenly falls to over 1,000mts. On this plain, coral formations built up over the millennium as the water depth went up and down with the ice ages. There are no mainland islands just coral reefs with the occasional small island of sand (cay). As a result anchorages are very exposed to any swell, so you can only take a boat there when the winds are light.

The weather gods were smiling on us when we left Cairns, to go down to Townsville, with the forecast of 10kts or less northerlies, for at least a week.

Ira and Giuseppe were back on board for the trip, as we left Cairns 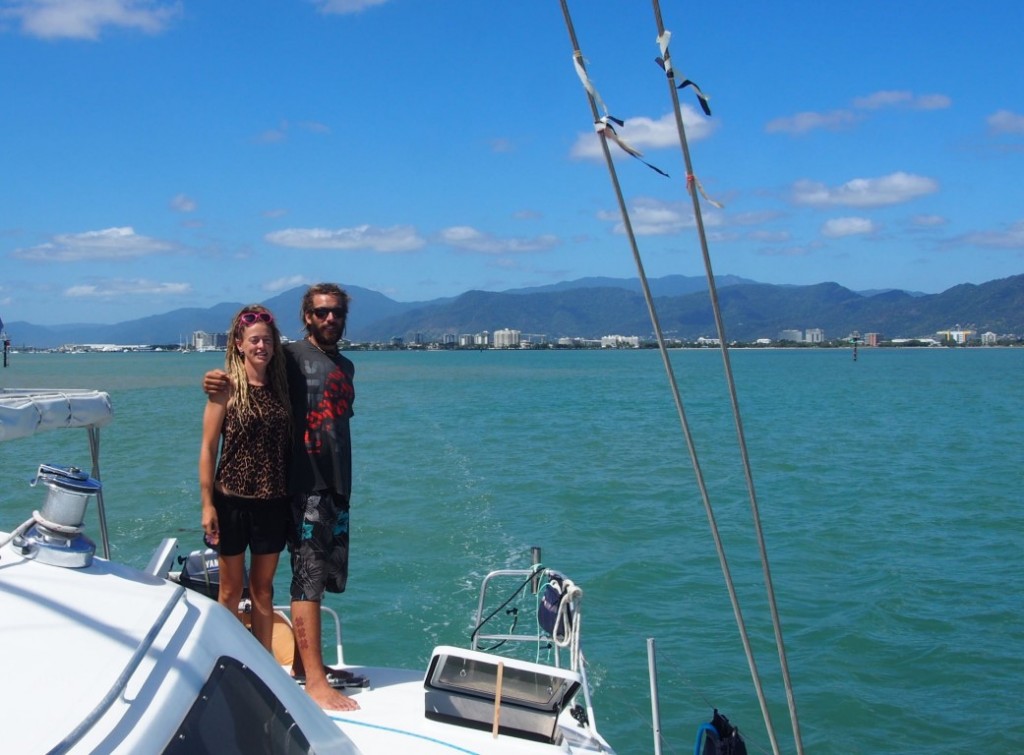 First anchorage was the cay on Sudbury Reef 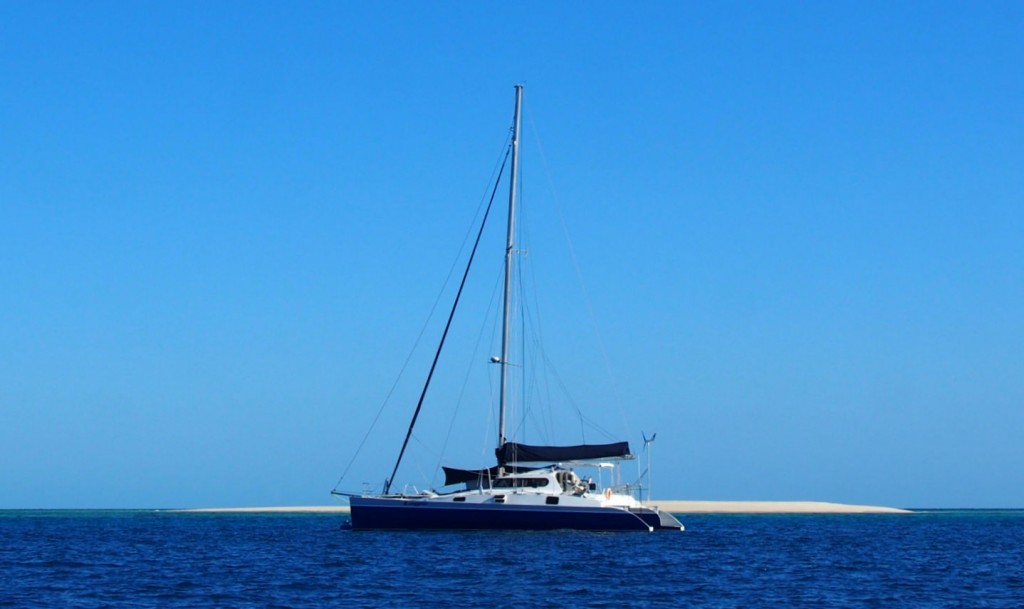 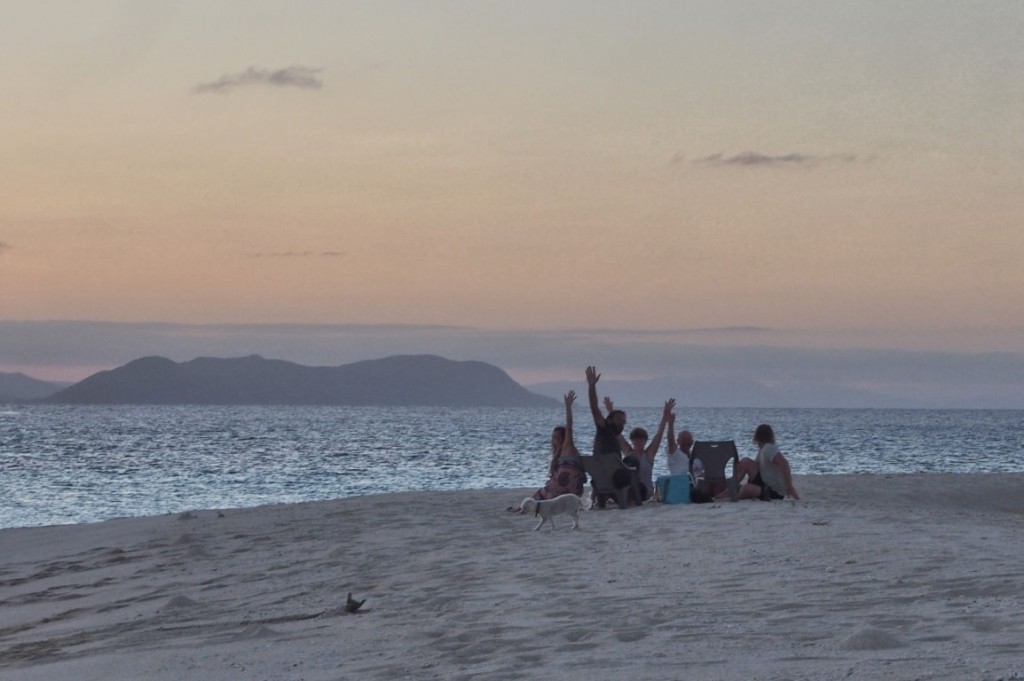 The next anchorage was Flora Reef which was typical of the anchorages for the next 5 days.

As we approached the anchorage we would be keeping a good watch for any coral heads close to the surface,

as we got closer it was time to identify a sandy patch inamongst the coral, with enough swing room to anchor in for the night

Then a route to the sandy patch, needed to be identified and then we weaved our way in amongst the coral formations 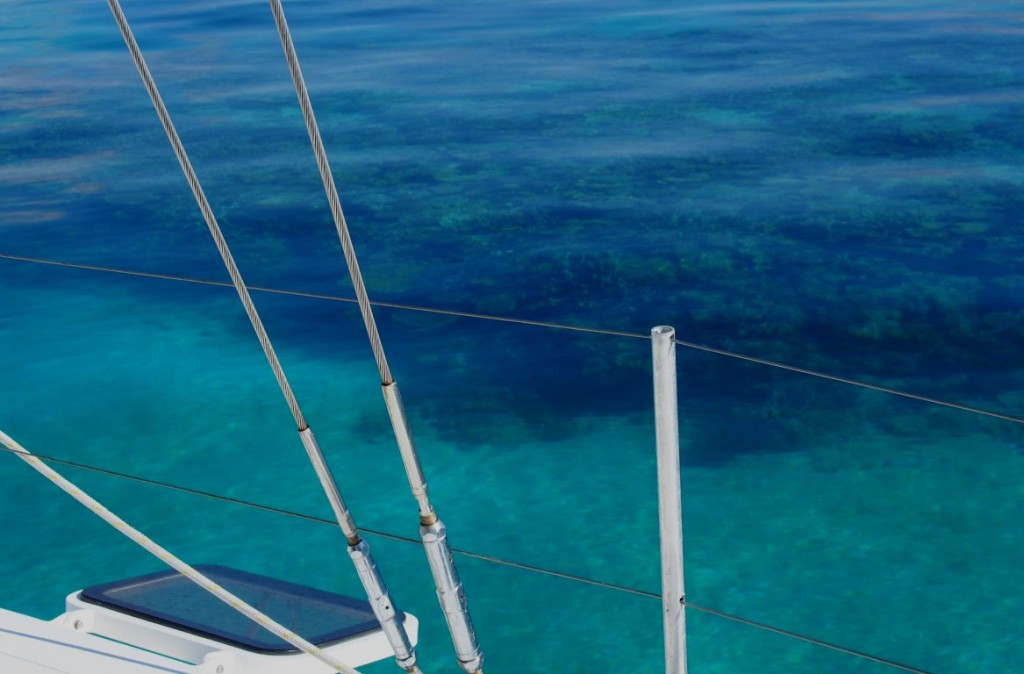 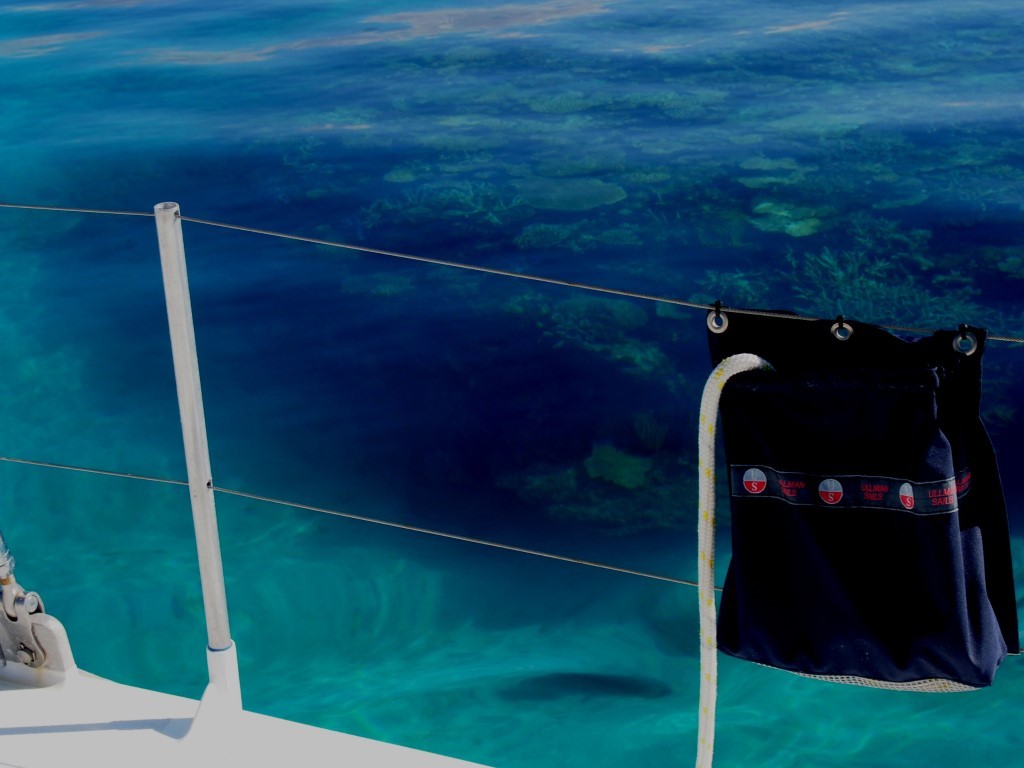 dropping the anchor in the sand

then over the side for snorkel/spear fish 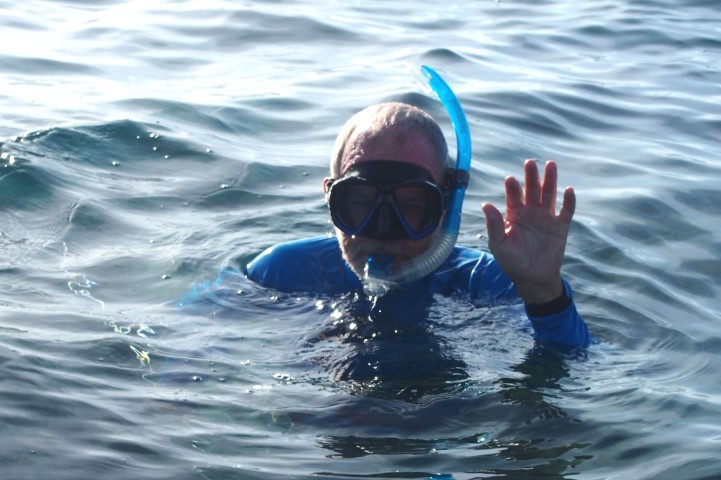 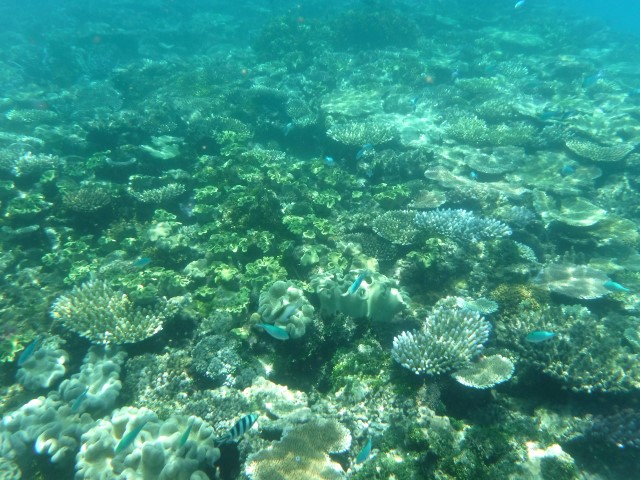 After Flora Reef, we anchored at Peart, Ellison and Otter Reefs, all highlighted on the chart at the top.

The final coral anchorage was Walker Reef. I took a screenshot of the day’s sailing from Otter to Walker reef. 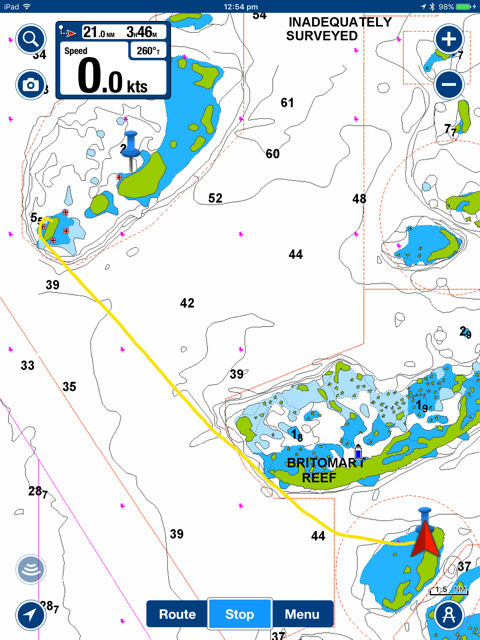 We would have 2 trolling lines out, whenever we were under way. 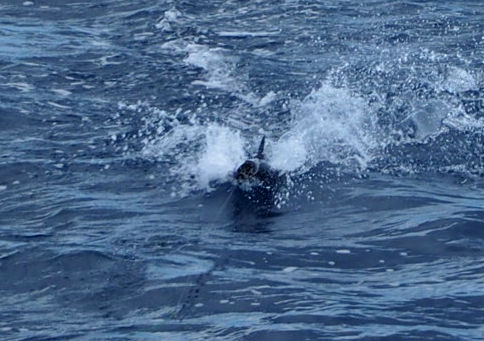 if we pulled them in fast, the fish would plane, on the surface, all the way into the boat 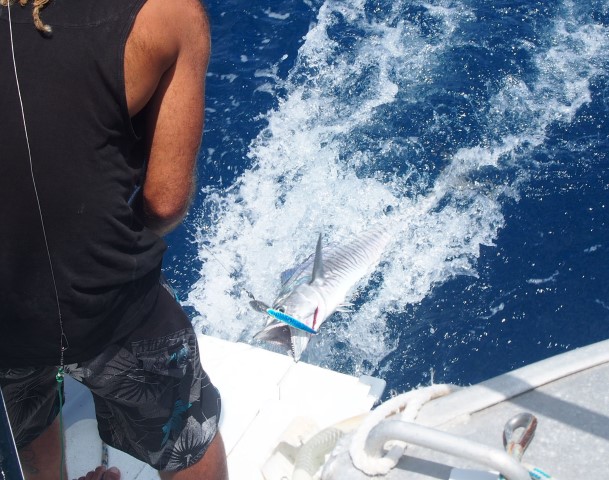 then they needed to be filleted 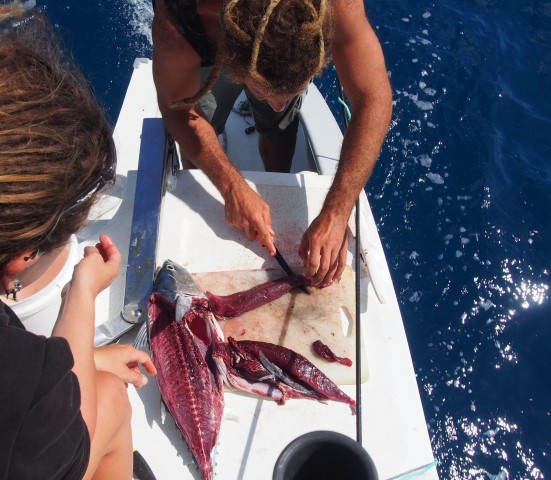 Mackerel went into the pan and Tuna was eaten sashimi 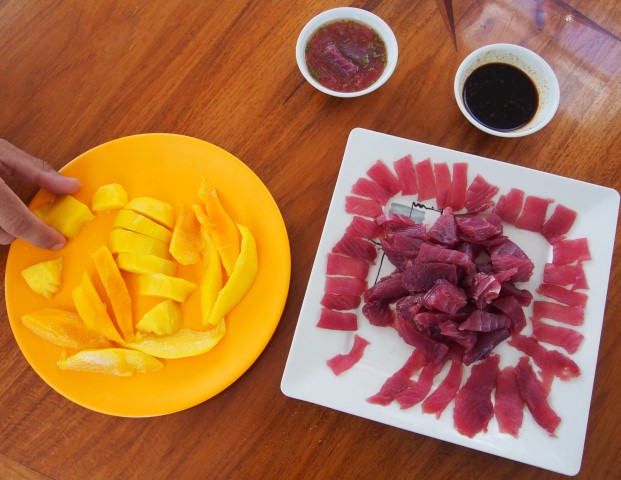 we did catch a Giant Trevally, unfortunately they are not good eating, so back it went 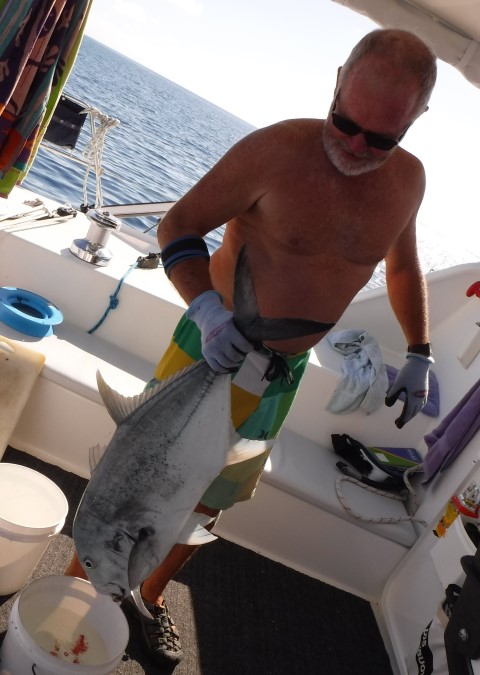 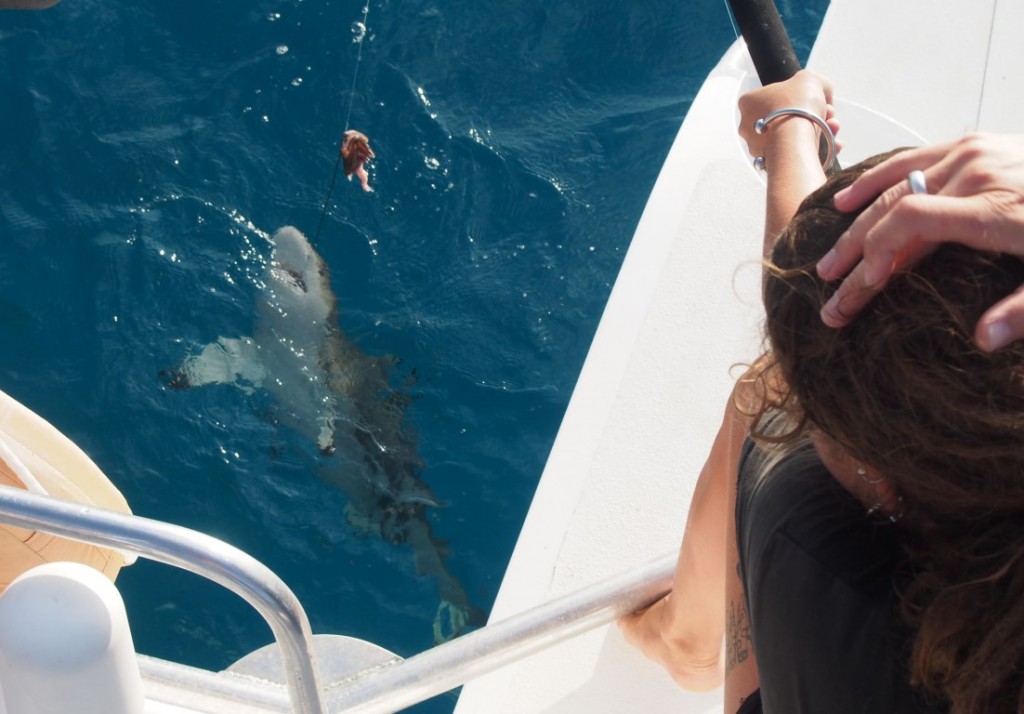 We were out there for the first Tuesday of November (Melbourne Cup). It would be very un-Australian to not have a Melbourne Cup sweep, so the crew from Alcandos can over to watch the race with us. 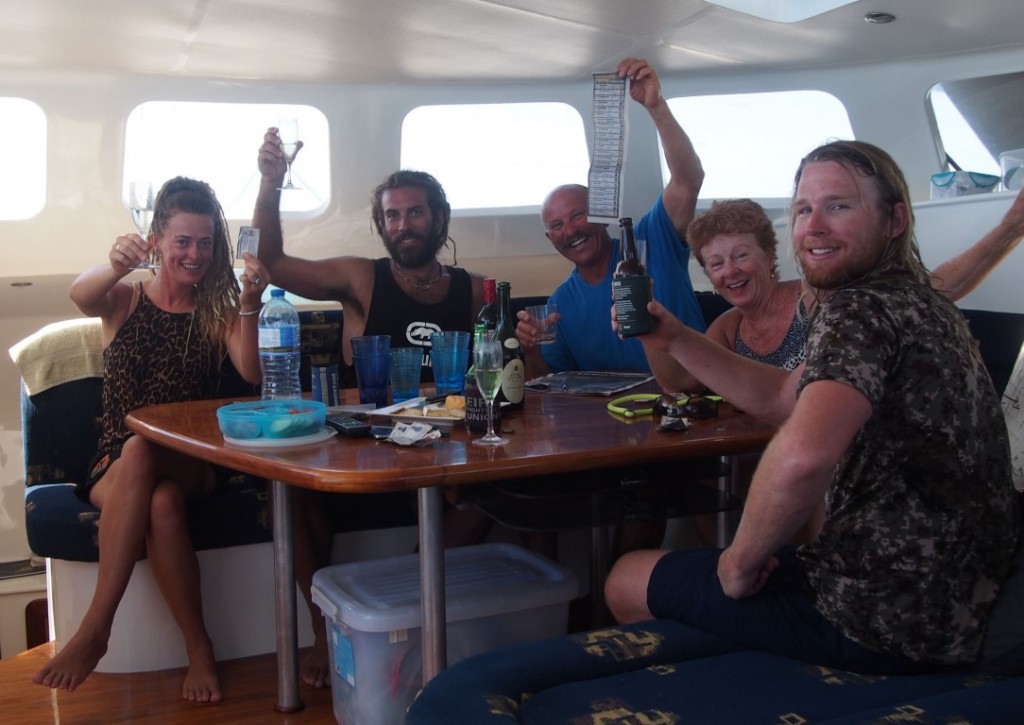 the crew from Logic drew First, Second and Third 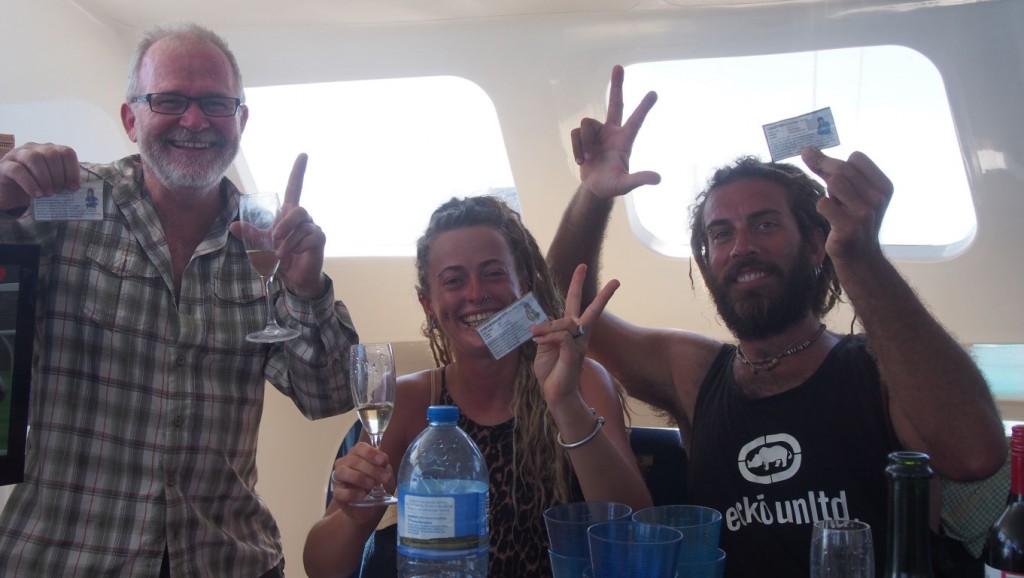 Snorkelling the coral off Otter reef was the stuff of dreams 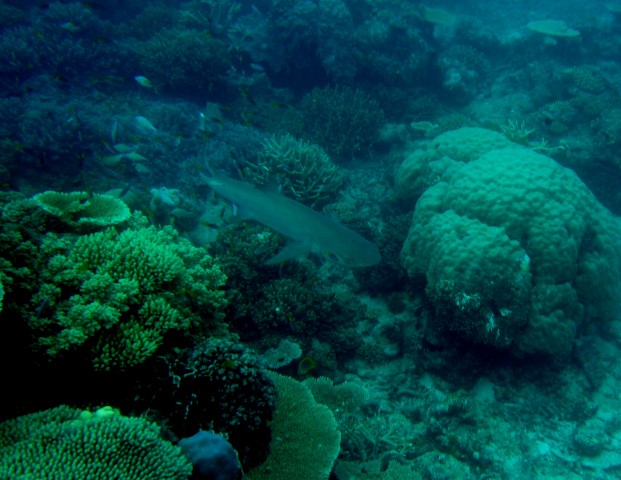 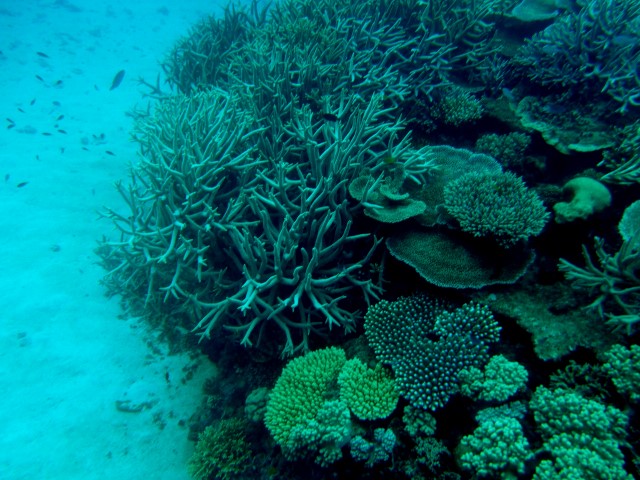 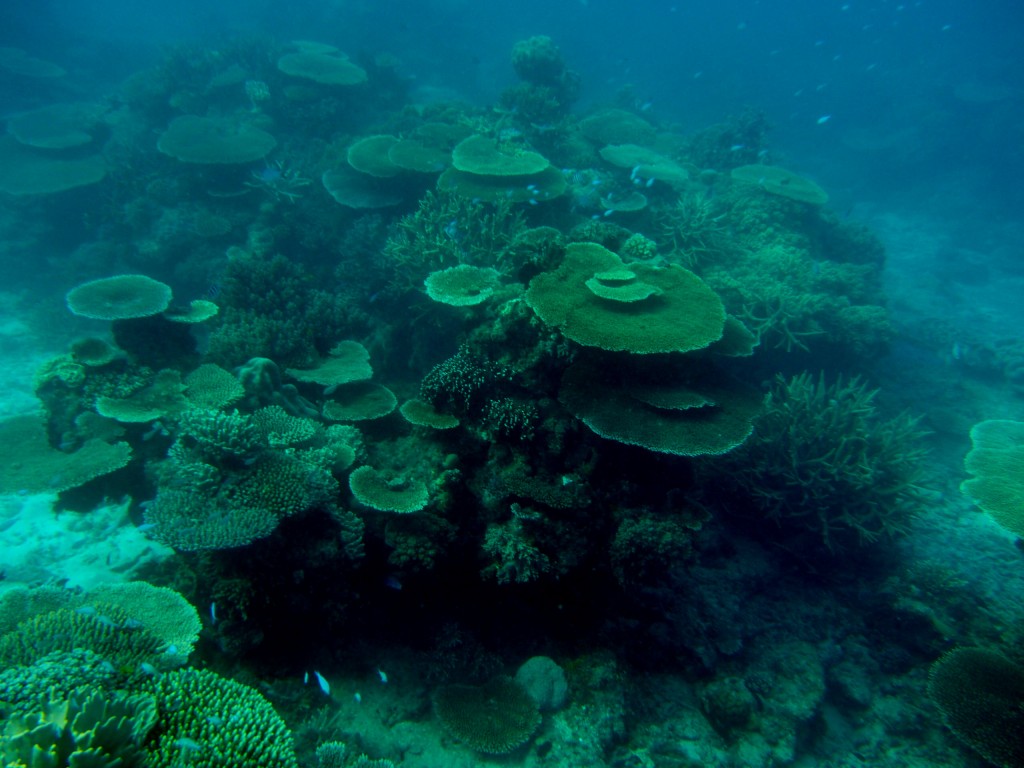 All good things come to an end, and it was time to head back to the mainland.

North East Bay on Palm Island had had some good reviews by other yachties.

It was nice, but after the week we had just had it was ordinary, so we went round to Barber Island on the southern side of Palm Island 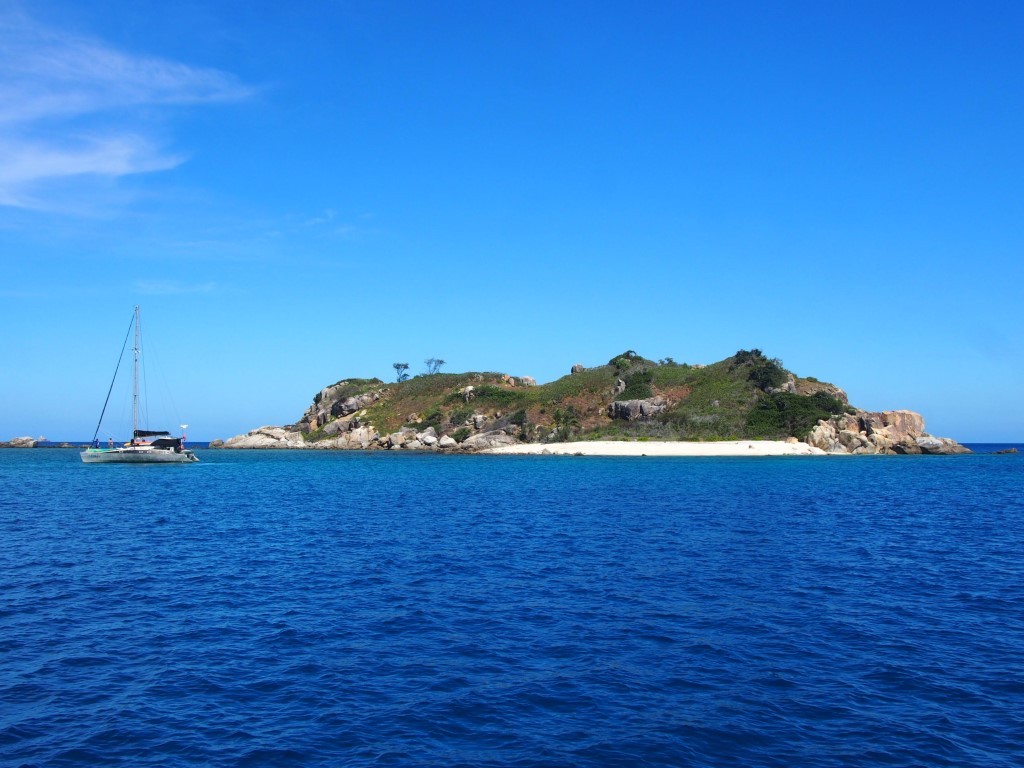 for the obligatory sundowners on the beach 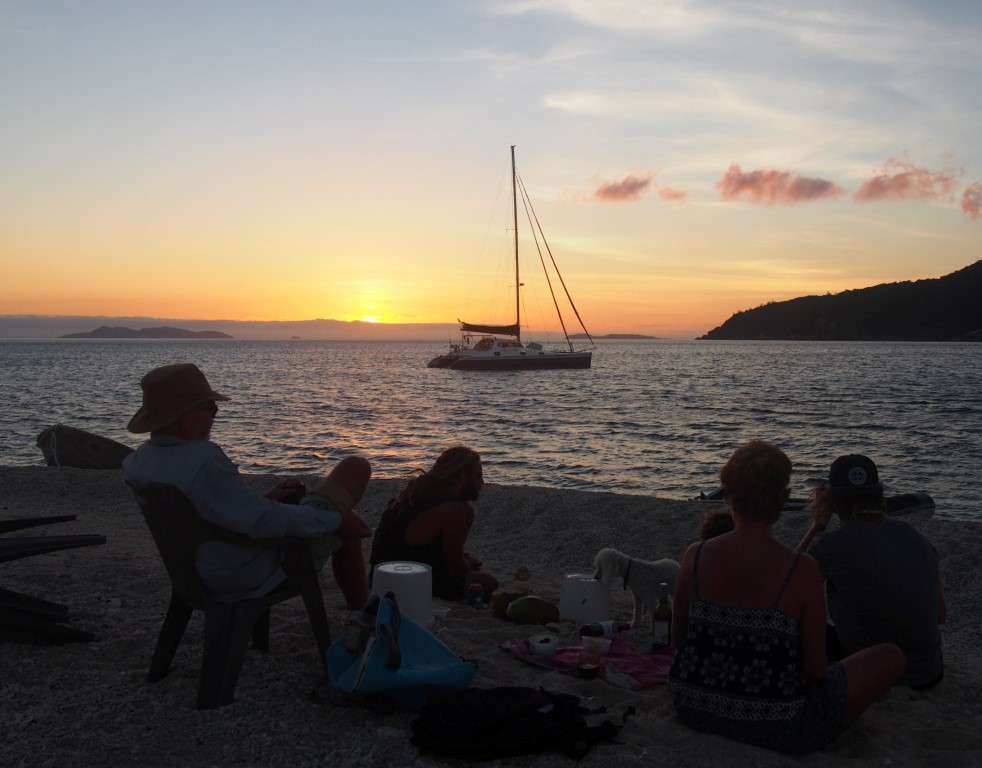 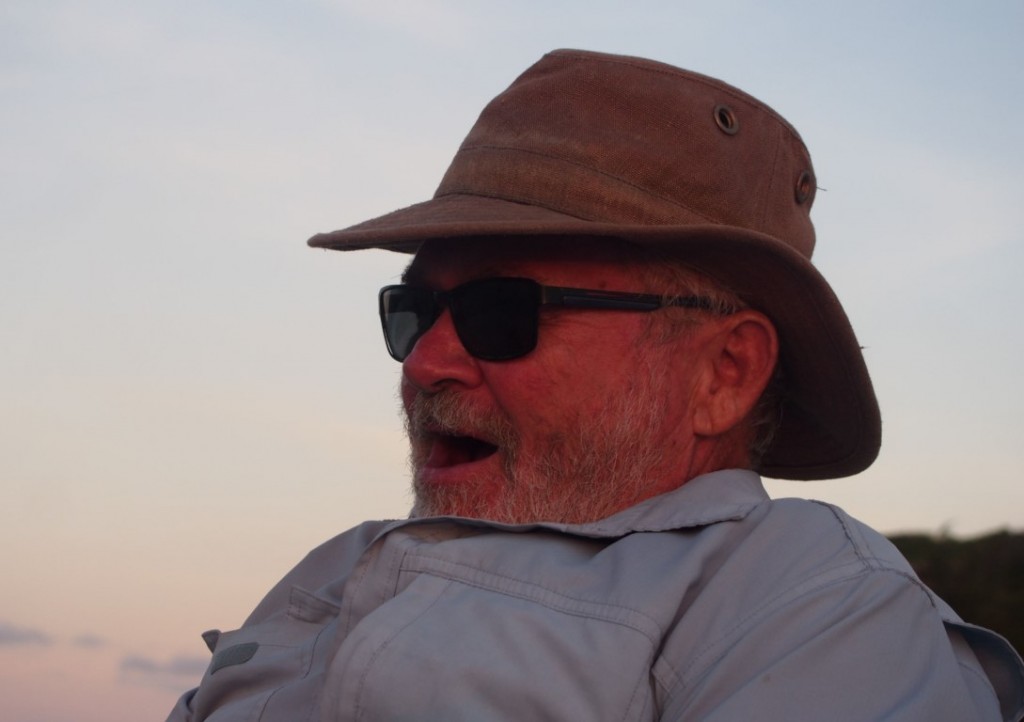 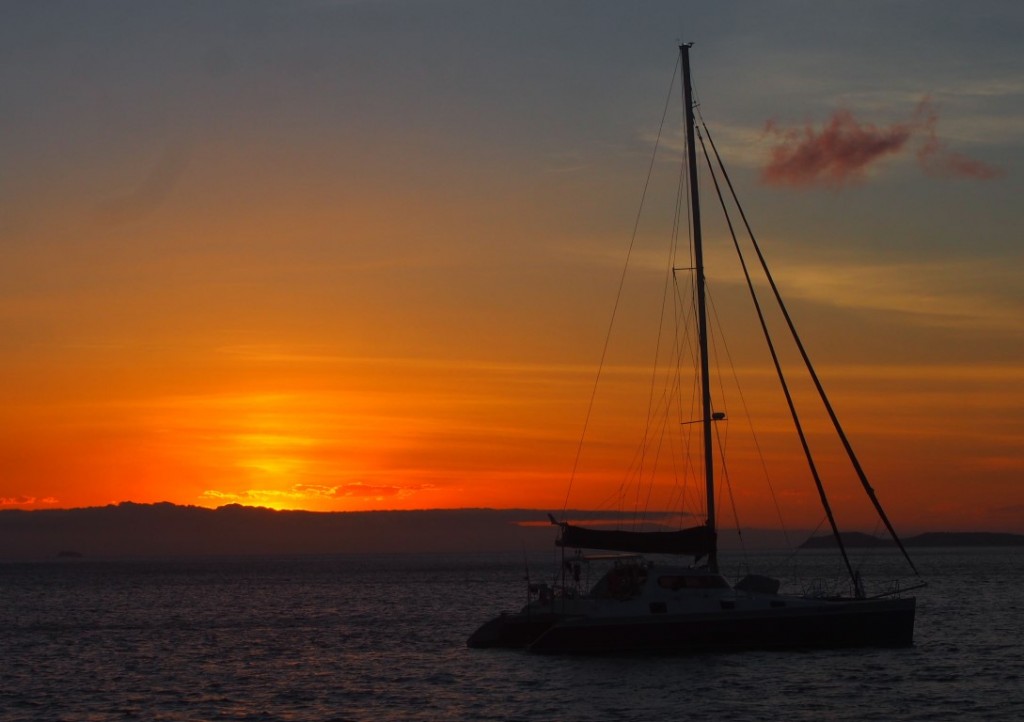 next morning at 4am, we were off to Townsville 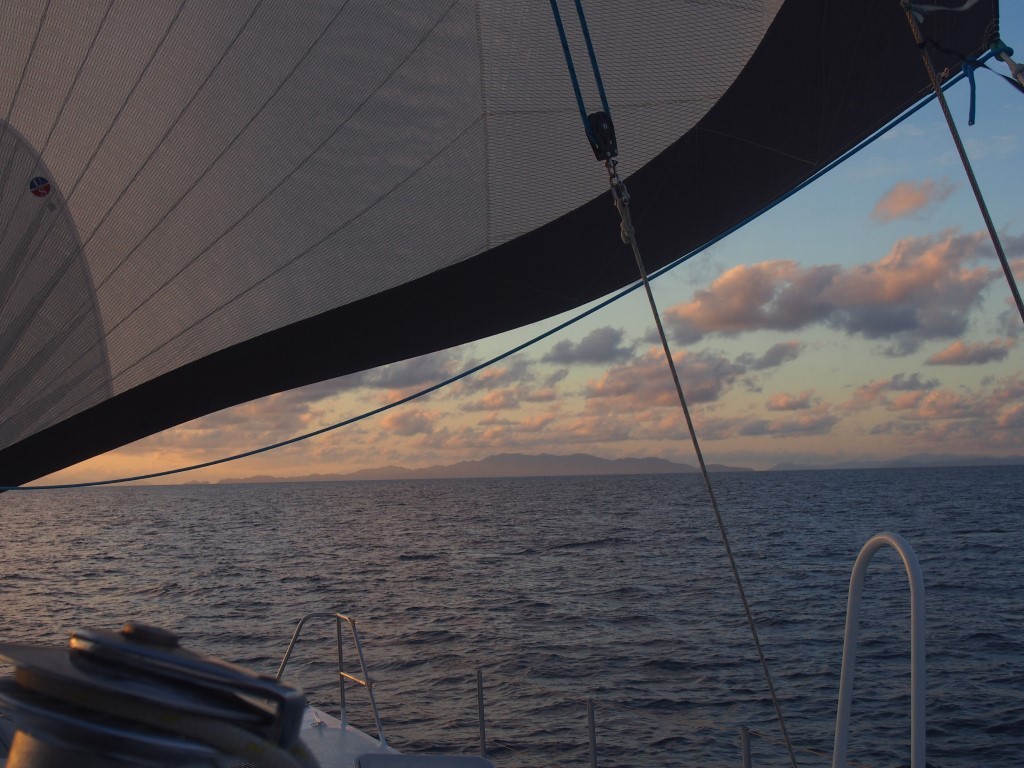 Logic’s bottom was getting dirty, so she needed to go up on the hard, for me to re-antifoul 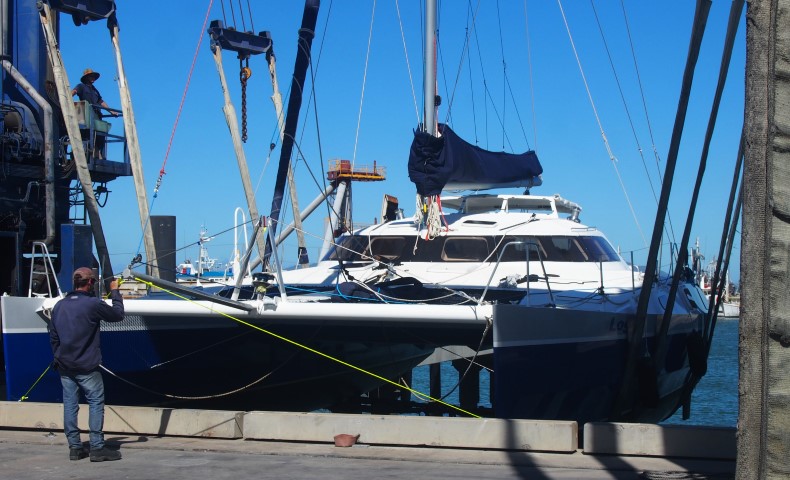 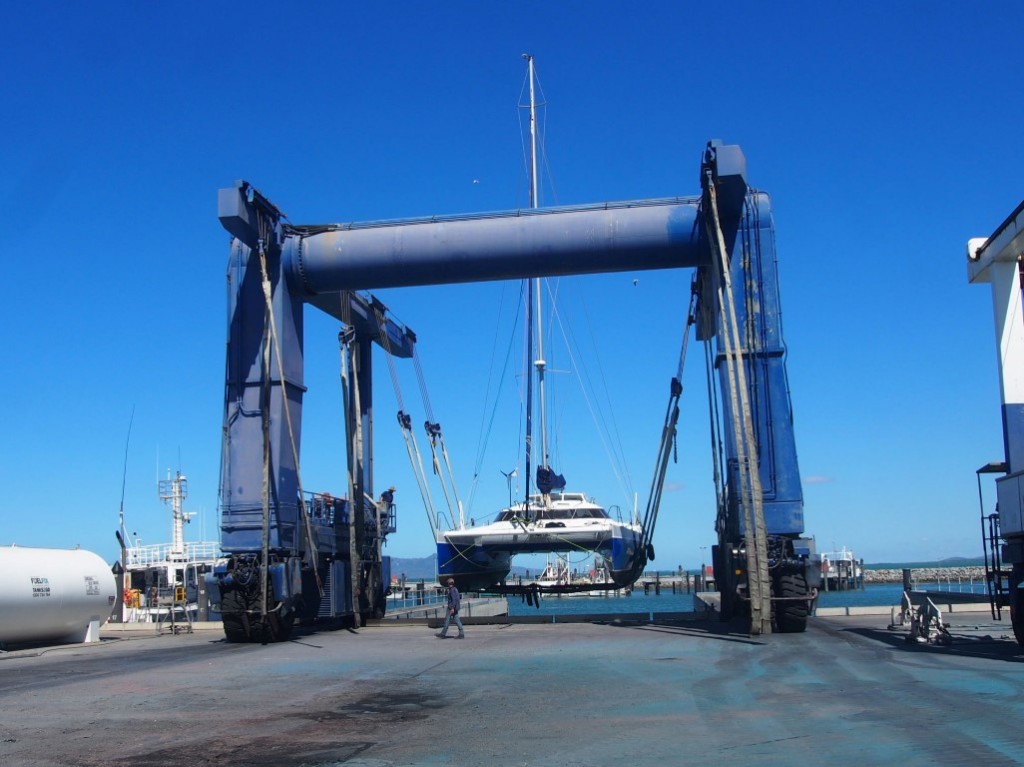 the blog entry has to end with the obligatory sunrise/sunset