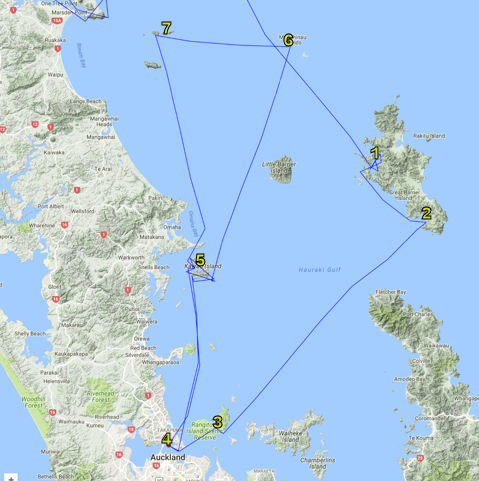 I now have a crew member for the next 4wks of my time in New Zealand.

Lisa works at the harbour in Falmouth on the south western English coast, who is over in NZ for her winter. 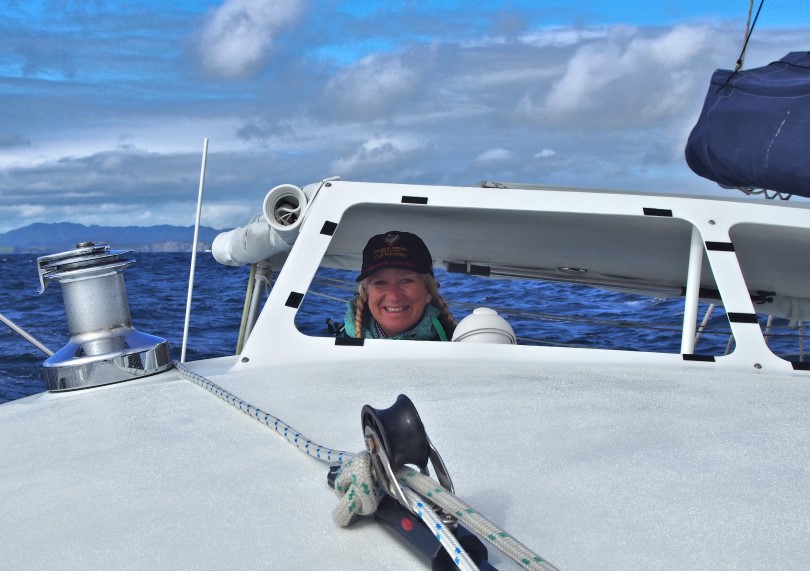 Lucky girl had a Common Dolphin interaction first day out 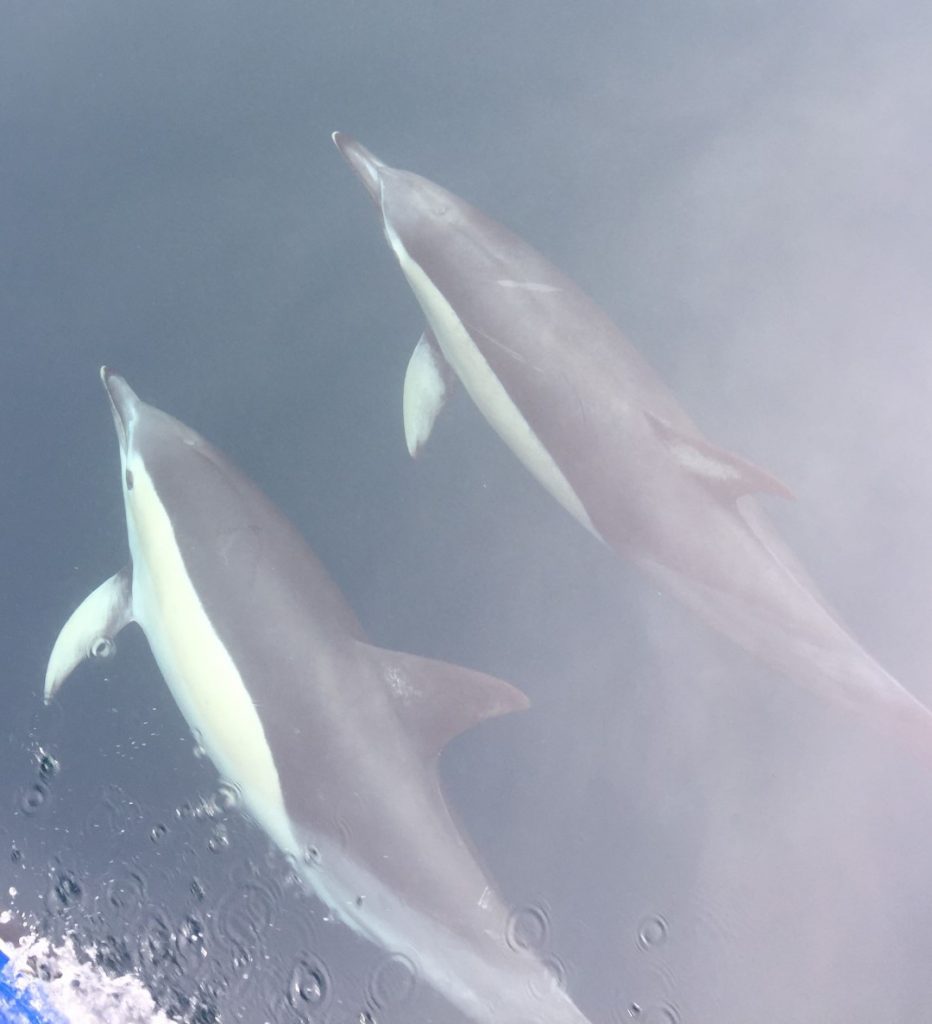 First anchorage in the Hauraki Gulf was Great Barrier Island, where we anchored in Smokehouse Bay, in Port Fitzroy (1). 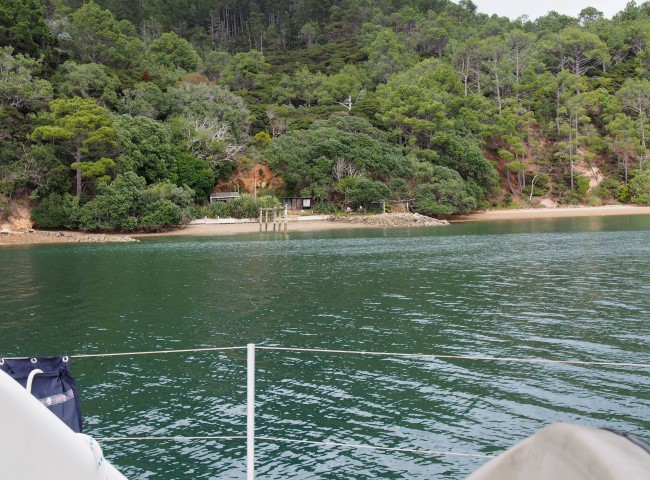 Lisa, is a very keen walker, which had her asking the crew of the other boats in the anchorage about walks. There was a very good one, along the western side of the island above the anchorage. With a great view of “man of war passage“

going through “man of war passage“ 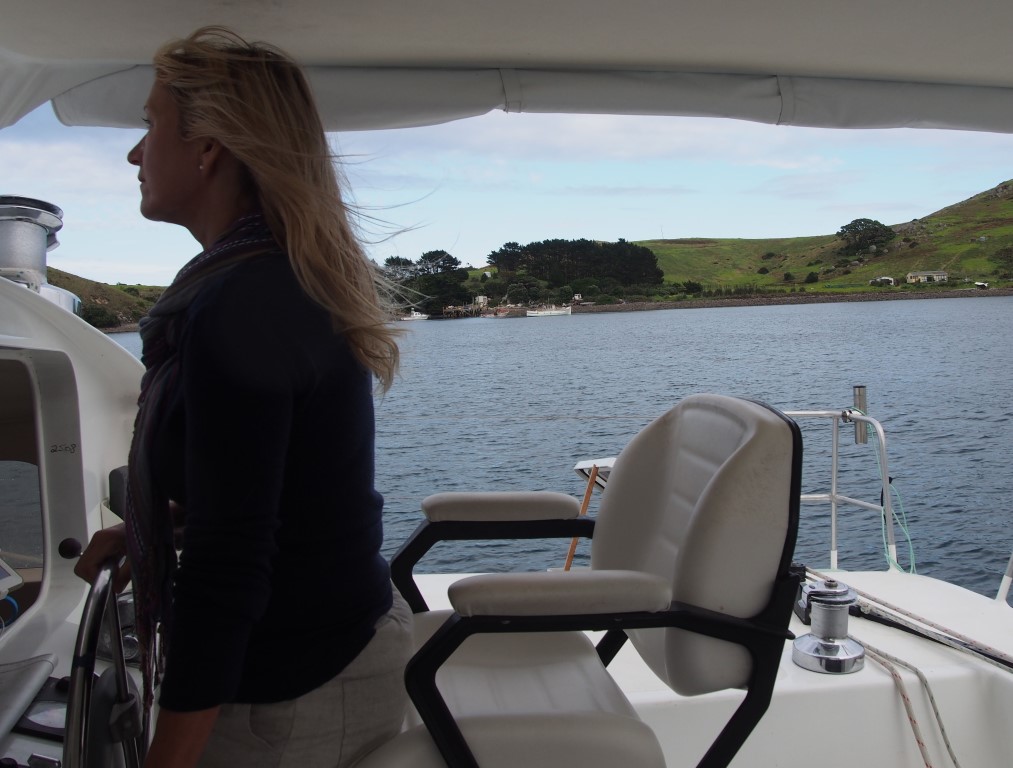 Catching a decent size kahawai along the way 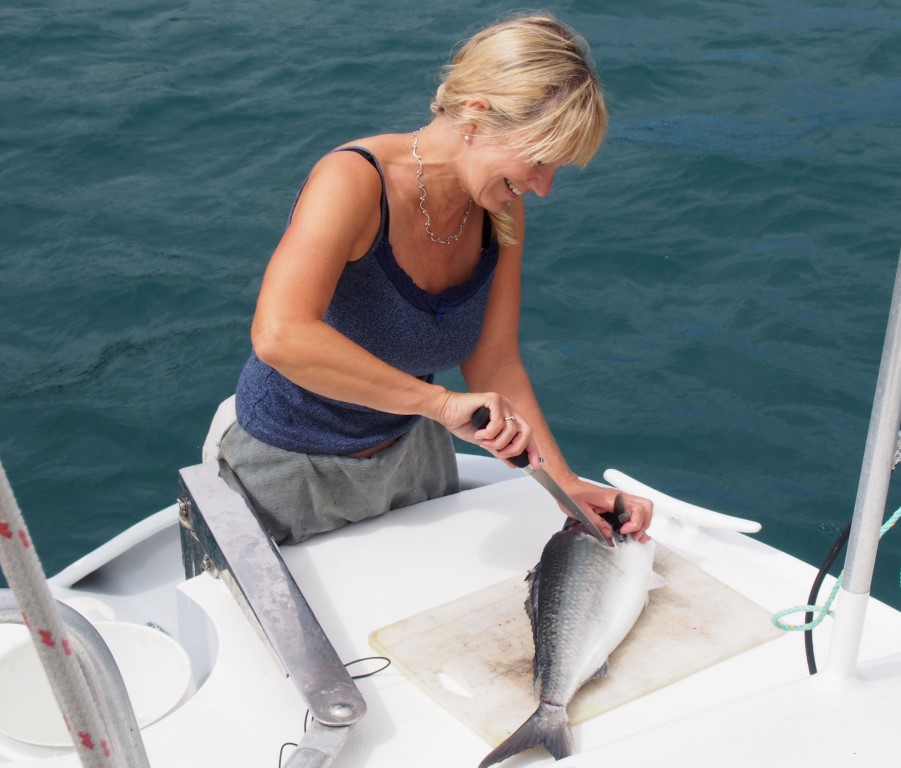 There is a much publicised Irish Pub in Tryphena that needed checking out .

Lisa had some tickets to Adele’s stadium concert in Auckland, so we headed over that way. Stopping off in Islington Bay (3) (between Rangitoto and Motutaru Island). with the obligatory walk to the top of Rangitoto Island, for the view down to Logic. 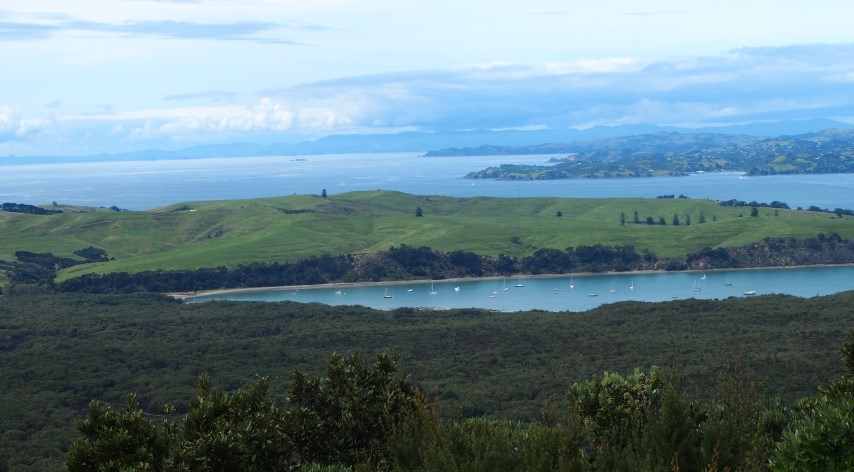 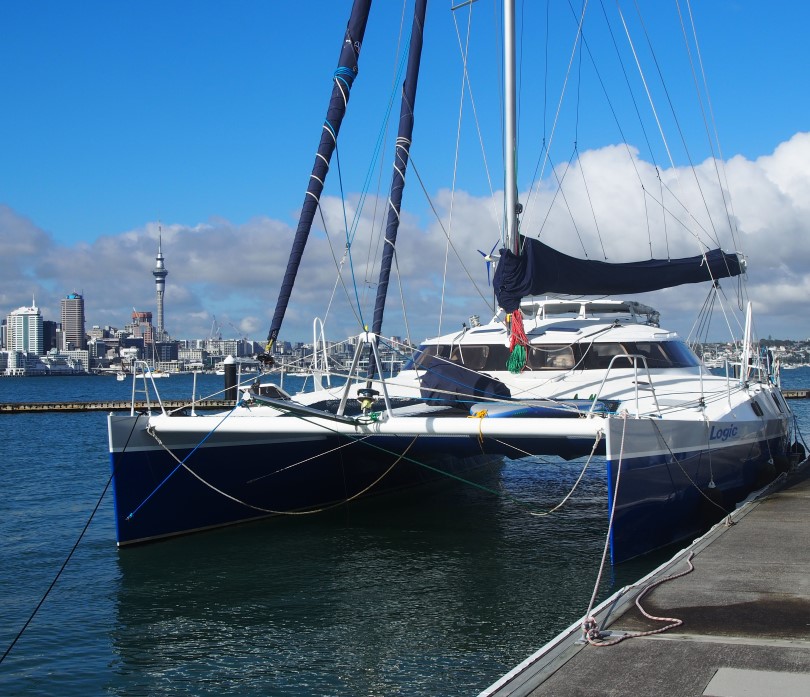 I keep on running into other Mumby 48 owners, Moonfish was already in Bayswater Marina 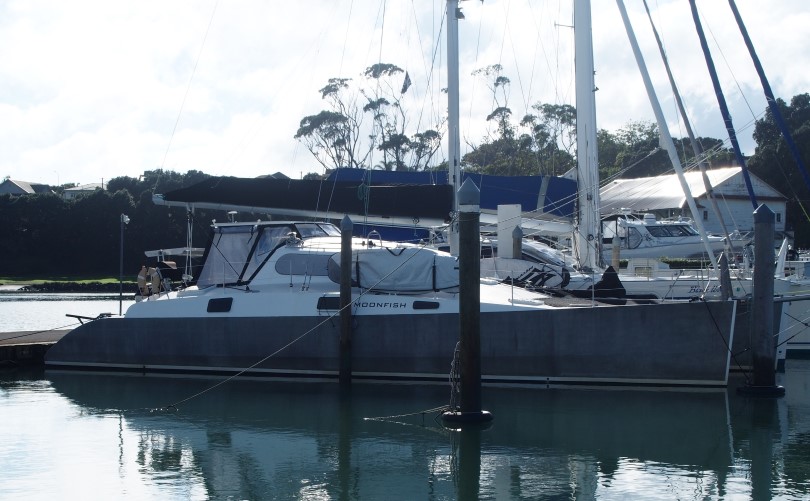 For the last week the forecast for the night of the Adele concert was heavy rain.

Up until she got on stage it was looking like the rain was going to hold off. 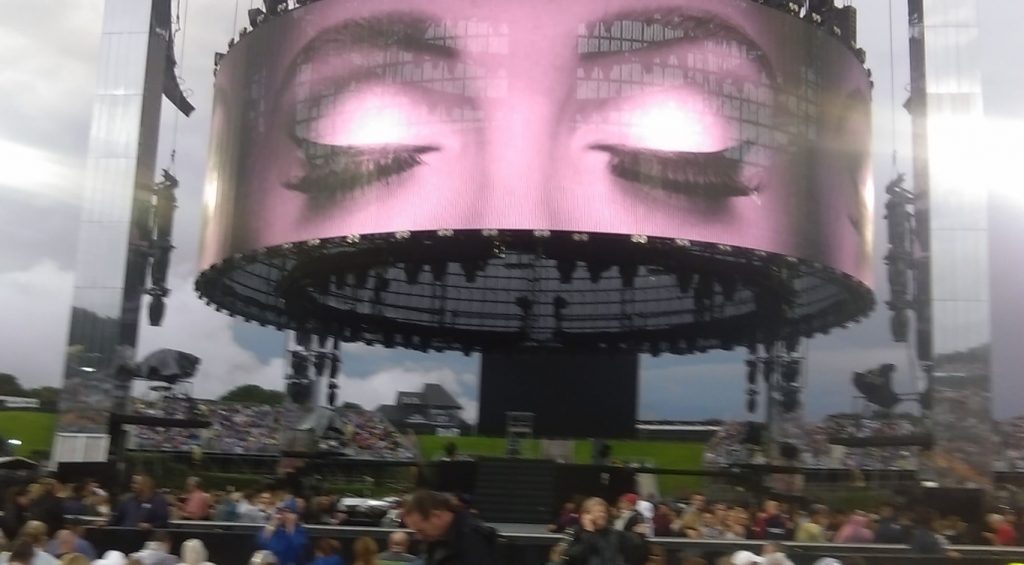 But, as she got on stage the heavens opened and it bucketed down for the next 2 hours (still a very enjoyable experience). 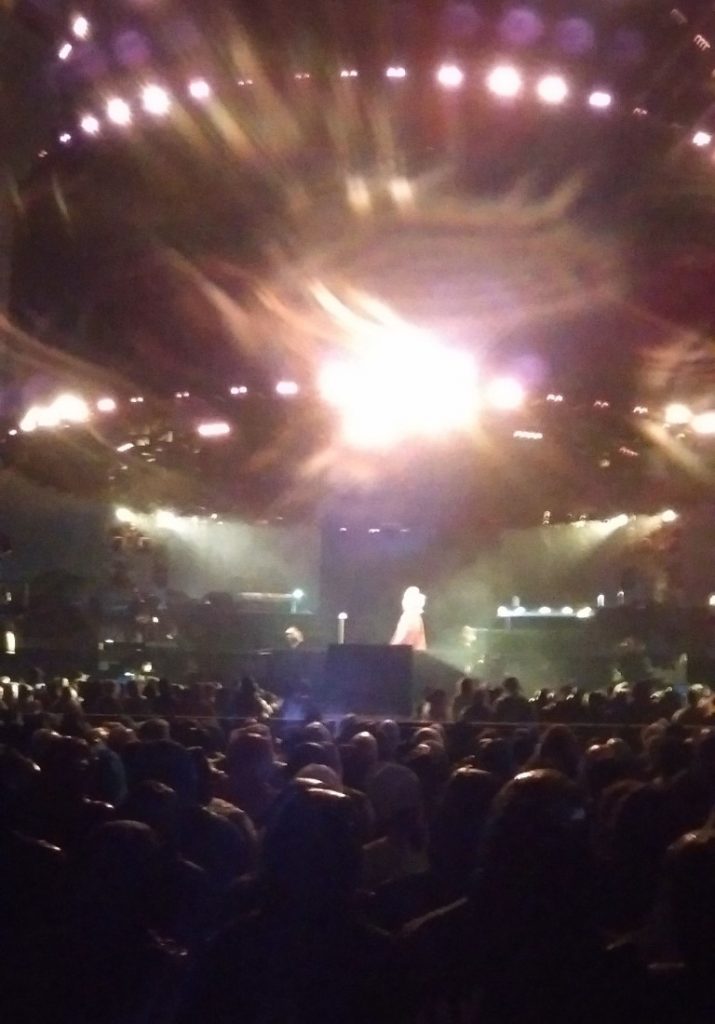 Cities are great in small doses, so we were only in Auckland for a few days. 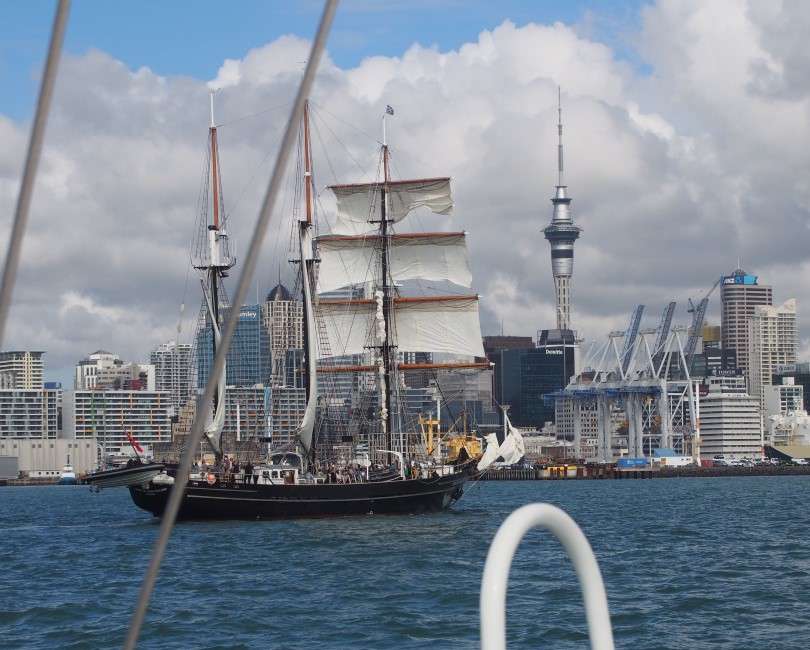 Next stop was Kawau Island (5), where Lisa SUPed ashore for her walk fix 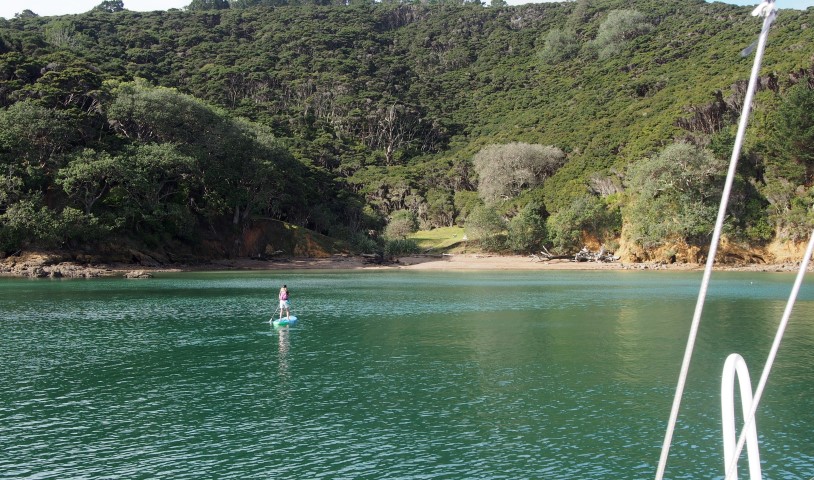 and an inspection of the old copper mine 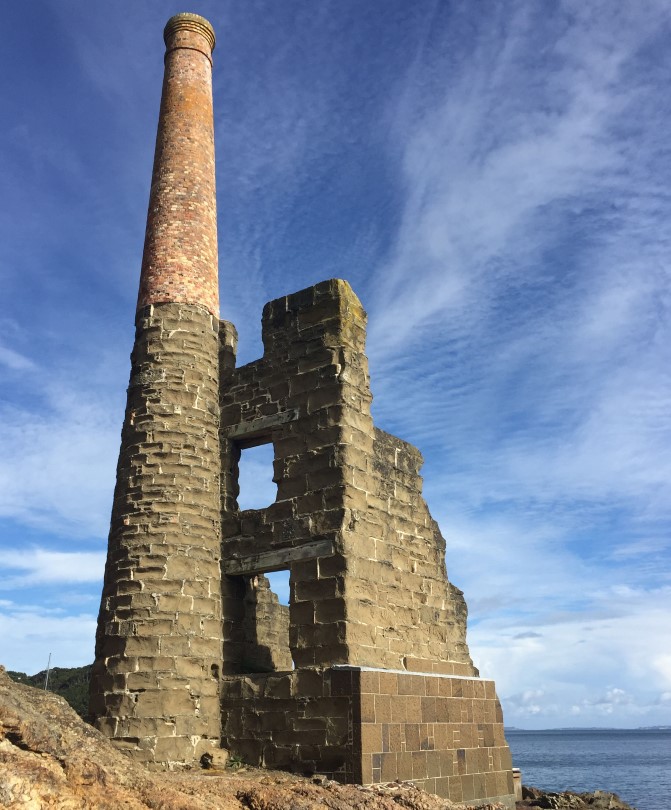 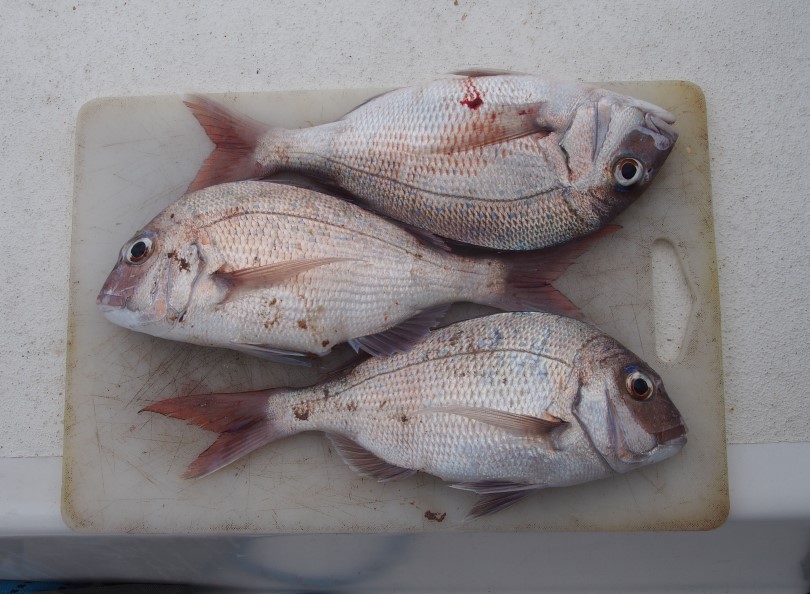 and a very yummy Kingfish 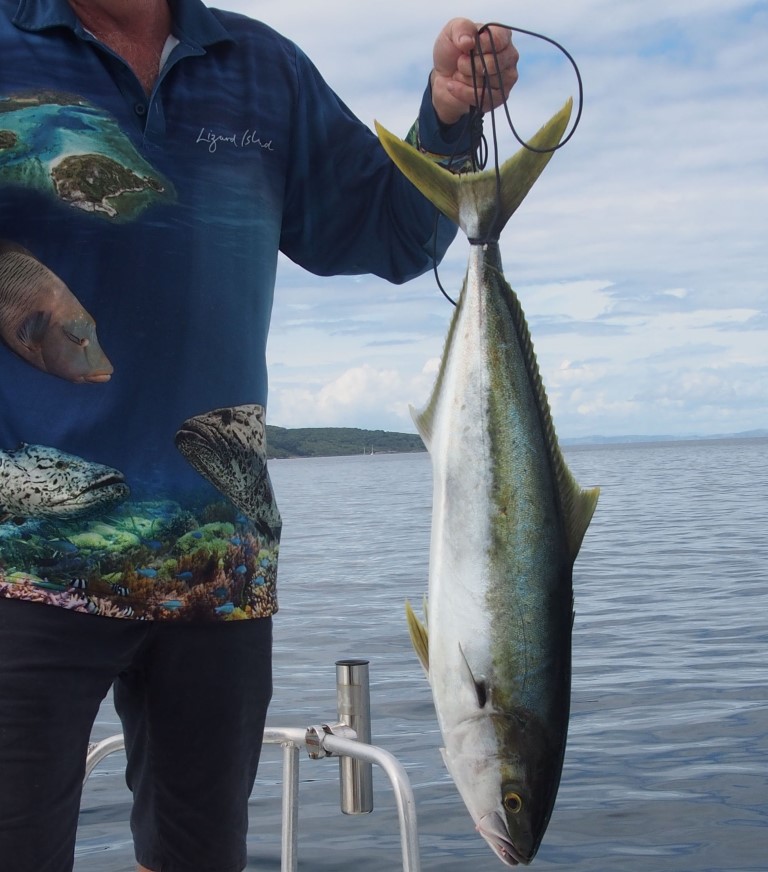 in the fine weather there were blue penguins everywhere

There are a few outer Island groups with anchorages only suited to light conditions. The forecast was light winds for 4-5days, so we headed off to the Mokohinau Islands at first light.

Anchoring in the lee of Burgess Island (6) 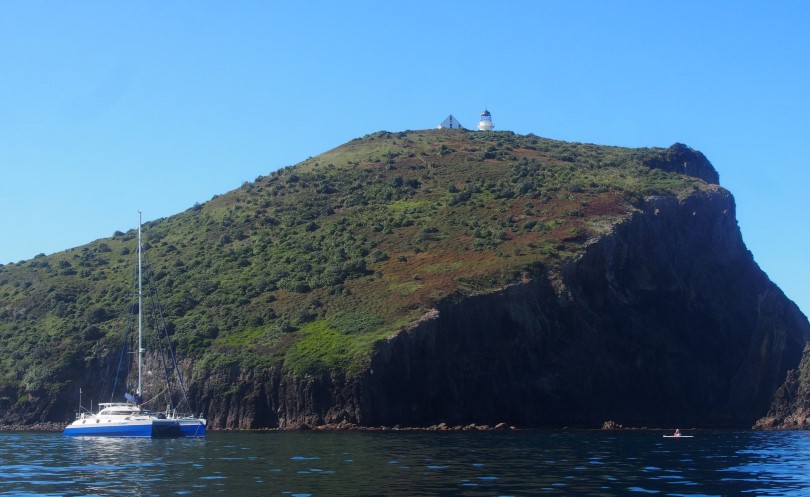 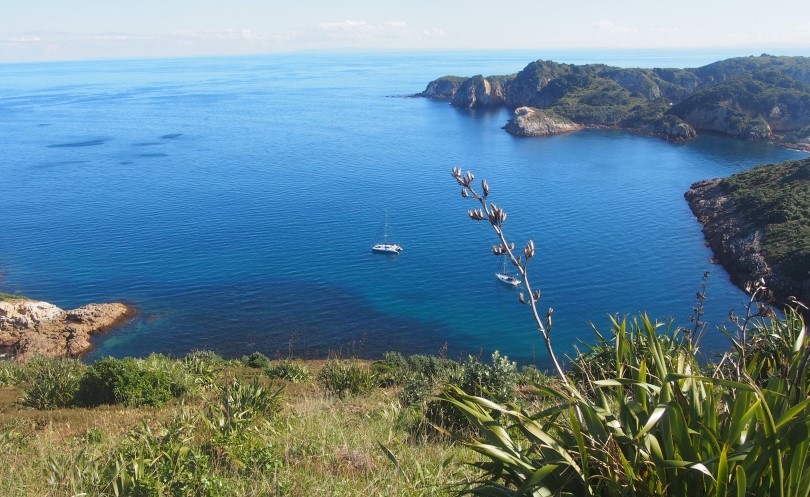 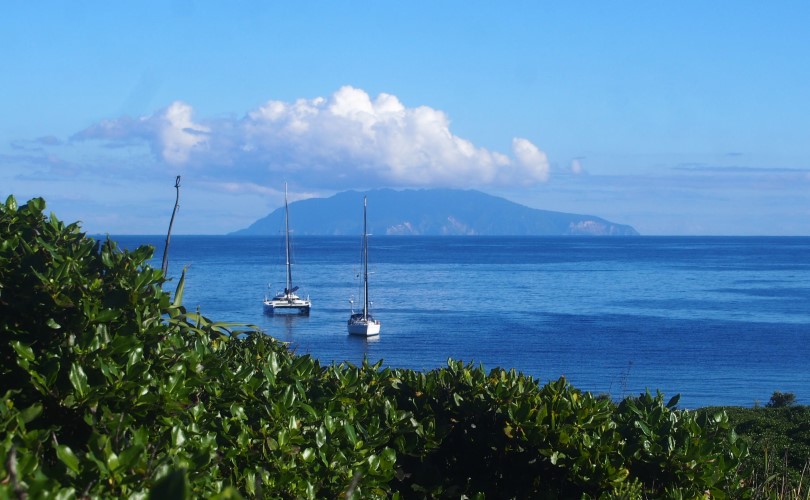 The waters around the boat were teaming with fish

The next morning we woke to find, we were sharing the harbour with a school of feeding bottlenose dolphins 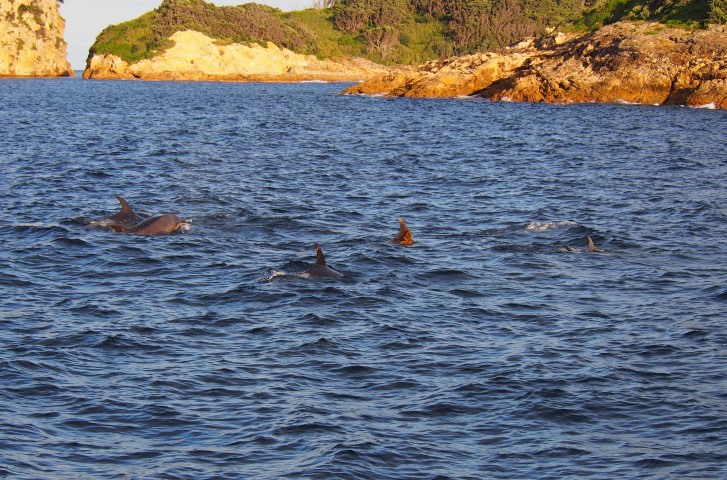 When they had finished feeding they were as curious of us as we were of them, they swam around us, under us, having a big time, for hours. 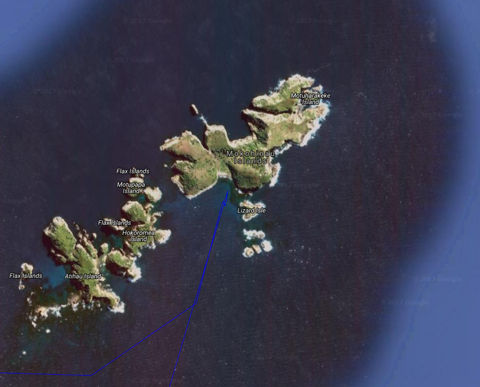 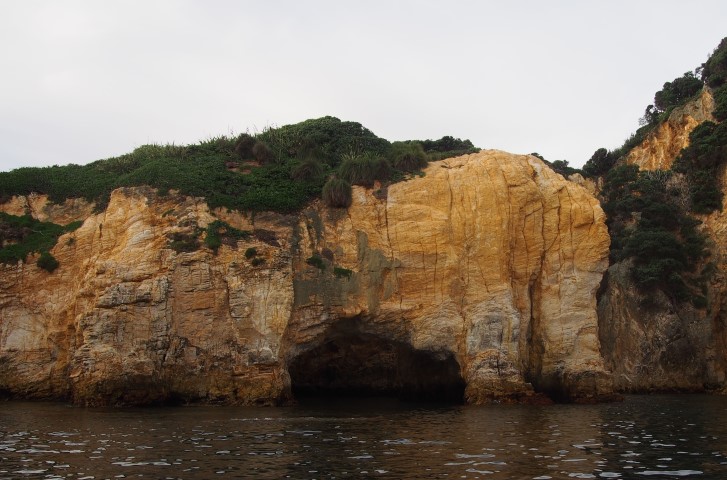 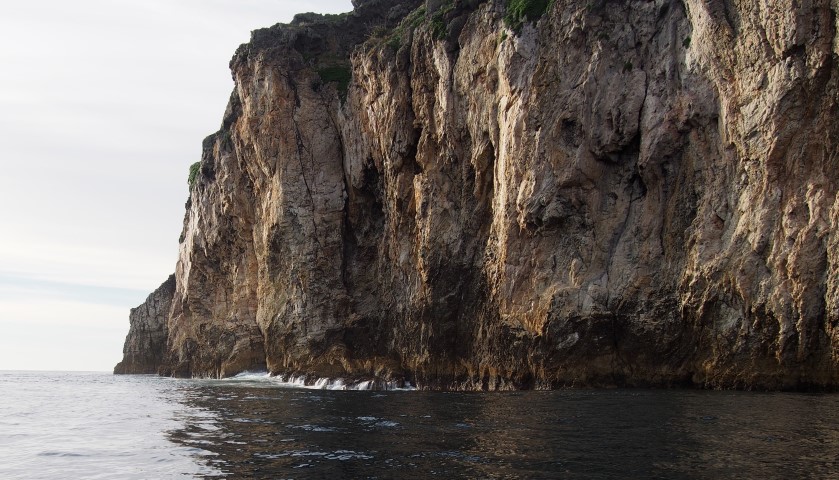 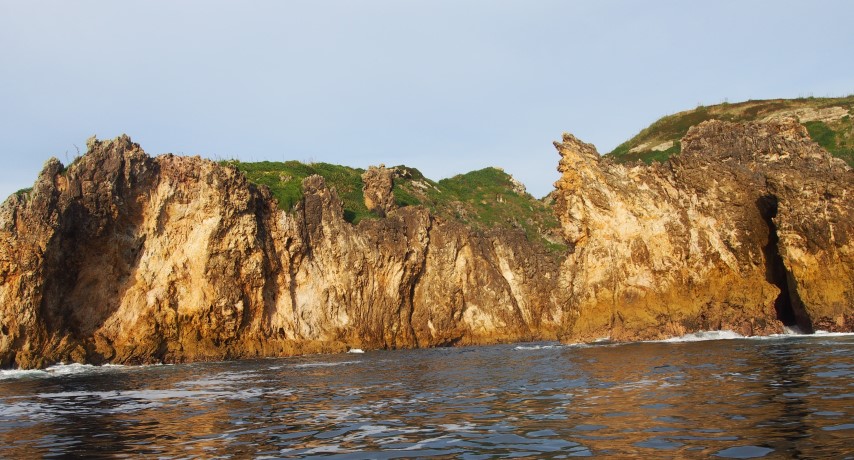 The weather was still benign, so after a few days, and a stop off to catch some more snapper, we headed over to the Hen and Chicken Island group(7).

Anchoring off Lady Alice Island, which is a conservation island, with no landing allowed, so Lisa had to get her walk fix on the SUP. 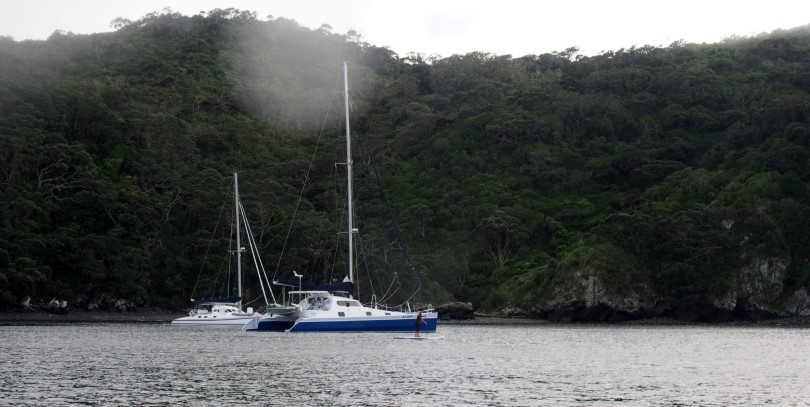 As dusk fell, a flock of blue penguins came into share the bay with us, calling to each other throughout the night.

early the next morning I was woken by a lot of splashing going on outside the boat, when I came on deck to investigate, there were bottlenose dolphins doing SeaWorld quality tandem leaps. 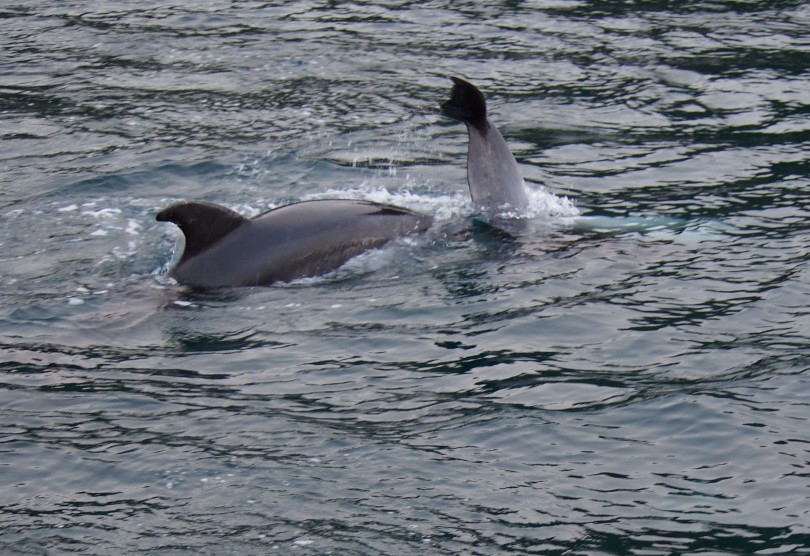 They hung around the boat for 4 hours

The weather forecast now had the remnants of Cyclone Debbie (that had made such a mess of Queensland) heading our way with 40kts winds and a heap of rain. The low hanging clouds were telling us there was crappy weather coming.

Time to get out of there. 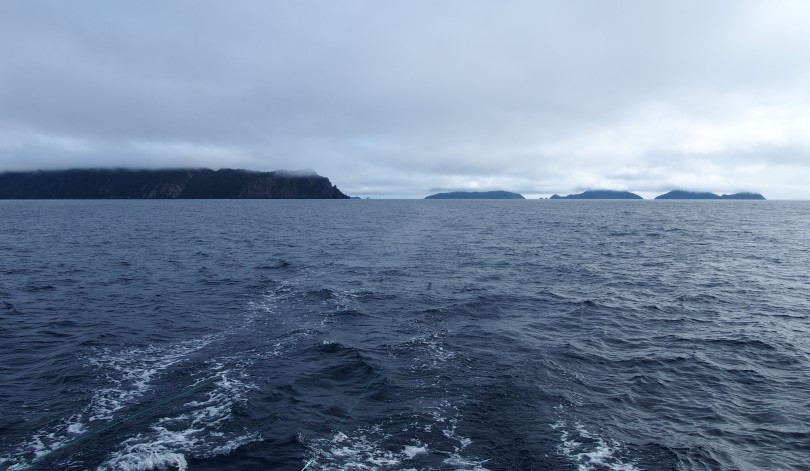 Lisa needed to disembark to go back to work in the UK, so we headed back to Auckland to see out the blow in a marina.

Overnighting in Kawau Island, where the cloud cover resulted in an amazing sunriseTTi 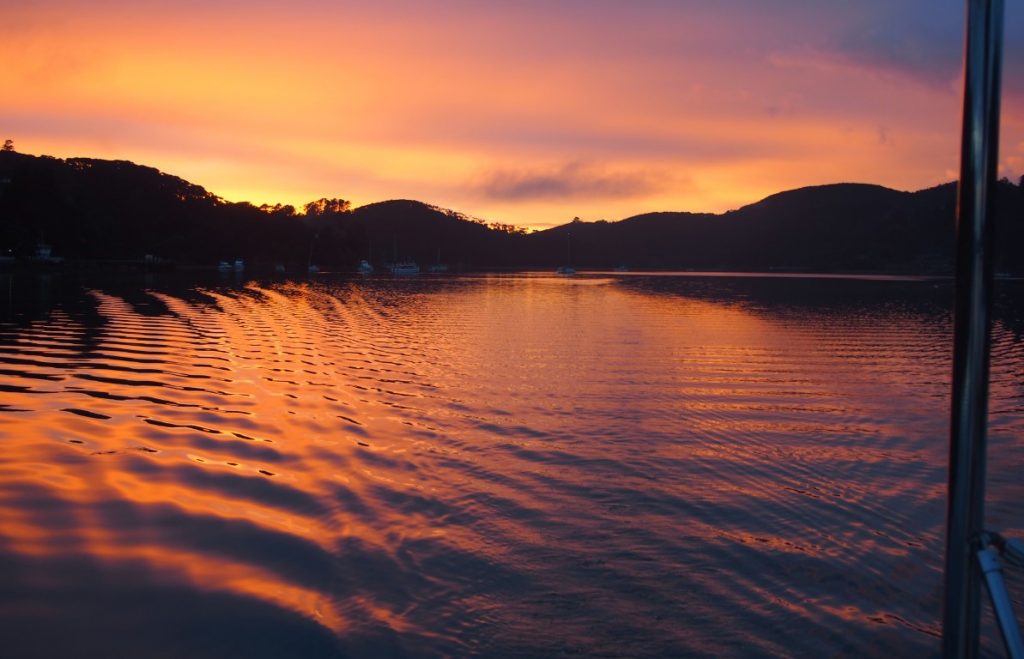 time to start getting ready for the next blue water passage to Fiji, later this month