The “splash” from The Boatworks was uneventful, all the necessary equipment on board worked perfectly.

Time to start our journey south, how far we get over Lisa’s month in Oz will be dependant on the weather. Favorable winds will have us moving, unfavorable and we will be exploring/enjoying the anchorage. 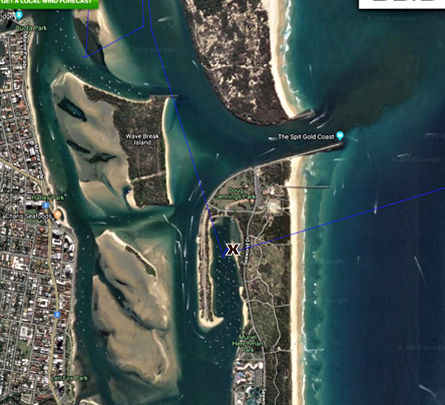 Lisa got to see her first free-ranging kangaroos en-route 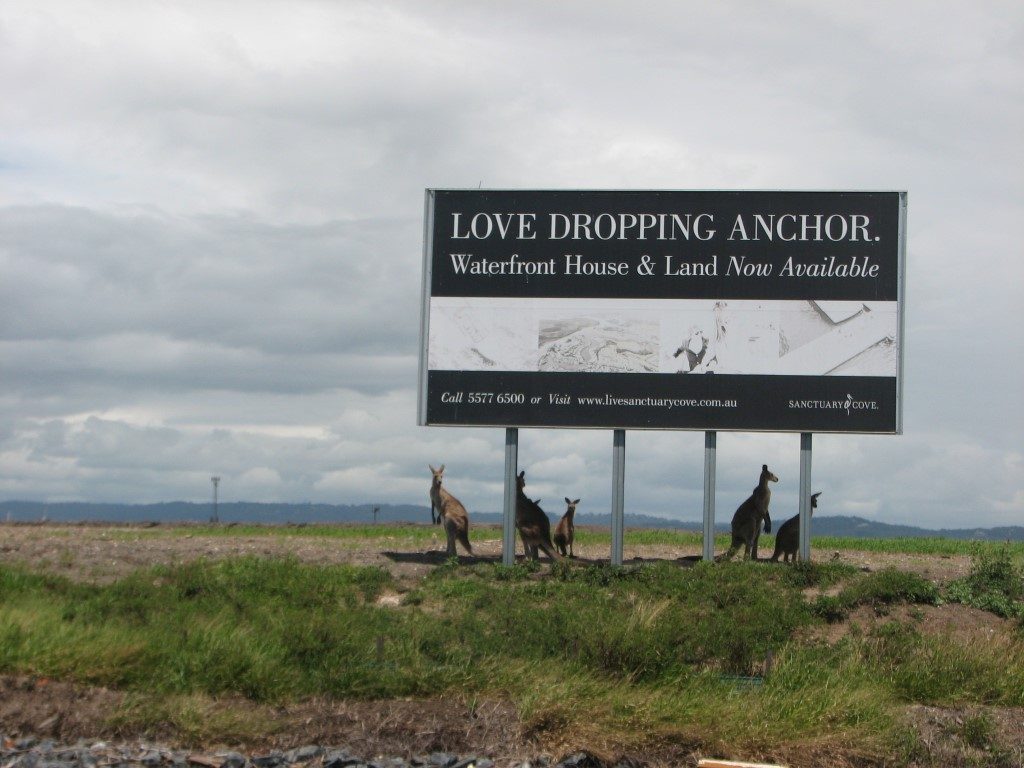 It took a bit of looking around in amongst the other anchored boats to find a spot to drop the anchor that  I was happy with. Boats anchored with 40mts of chain out in 6mts of water, had us dropping the anchor then pulling it up, as they swang close to us in the 20kt breeze. 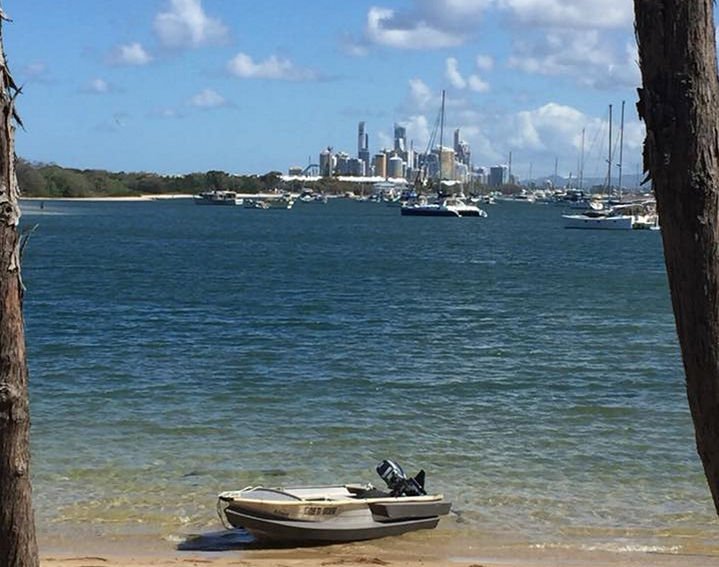 After 6 months in the South Pacific, having high-rise buildings in the immediate vicinity was surreal. (Lisa’s Photo)

We walked across to the surf beach for a swim 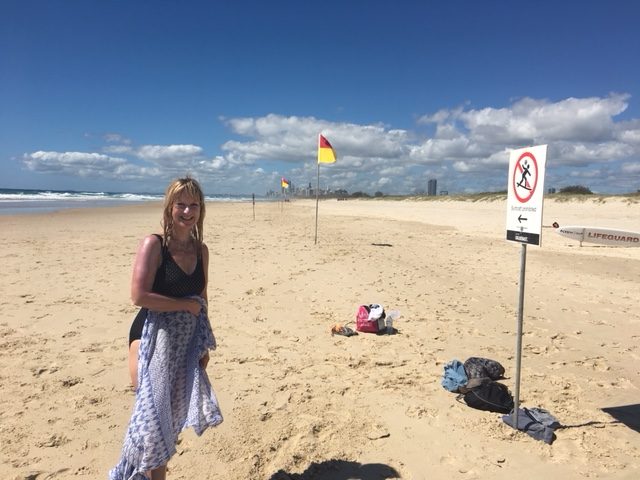 then a walk down the beach 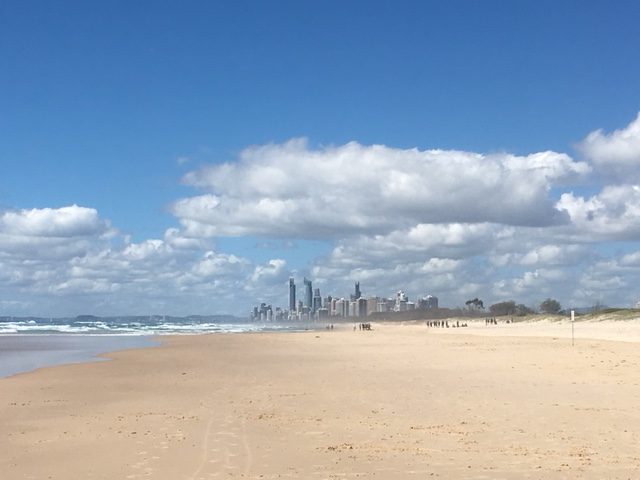 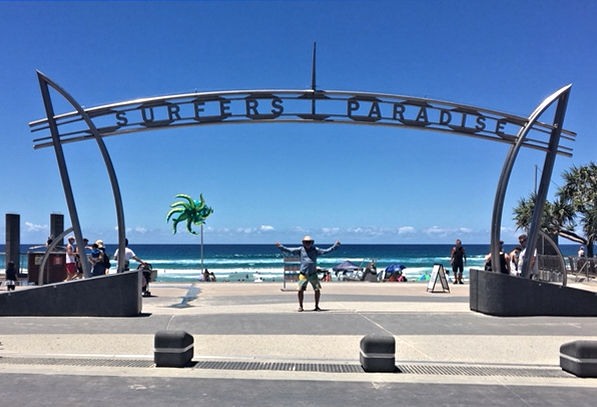 The next stop down the coast, with a bar crossing that was only semi-scary was the Clarence River. A university friend of mine from 40 years ago lives at Yamba, on the southern side of Clarence River. I was looking forward to catching up with Geoff and his wife Micklin.

The best time to cross a coastal bar is just before the top of the tide at dawn, which as luck would have it was in 2 days time. But it necessitated an overnight passage for the 110miles.

Erring on getting to the bar early rather than late, we went out of the Gold Coast Seaway at midday. The breeze was 10kts from the beam, and Logic being Logic took off , doing 9kts as we went past the high-rises of Surfers Paradise. 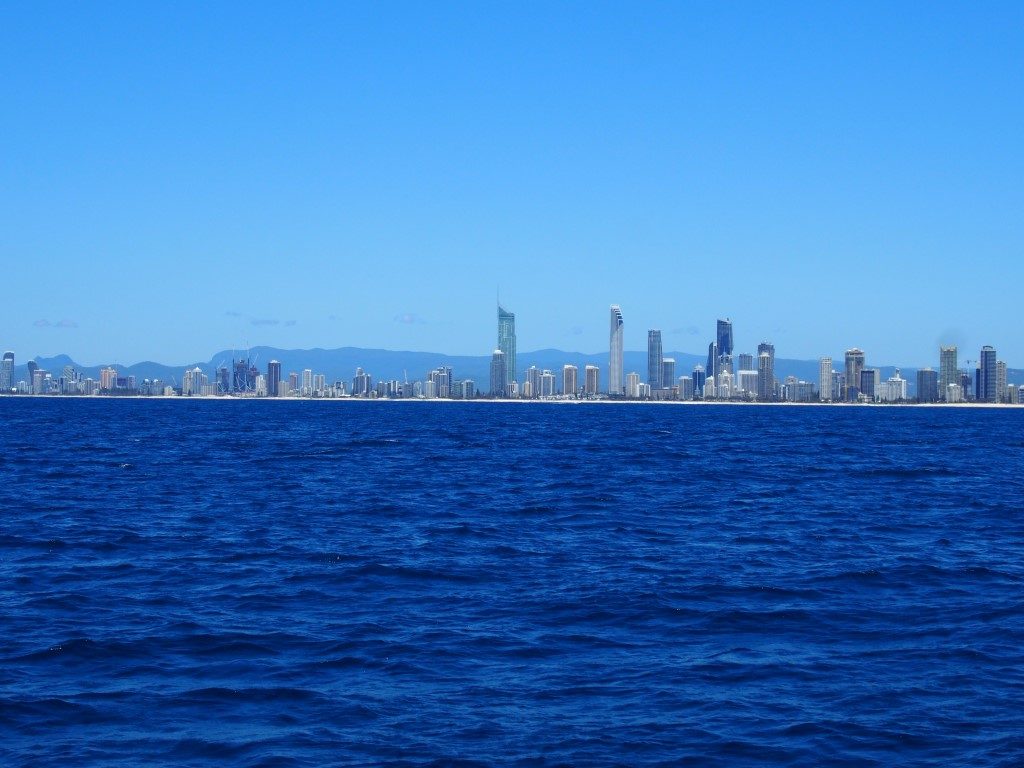 As we went past Julian Rocks off Byron Bay 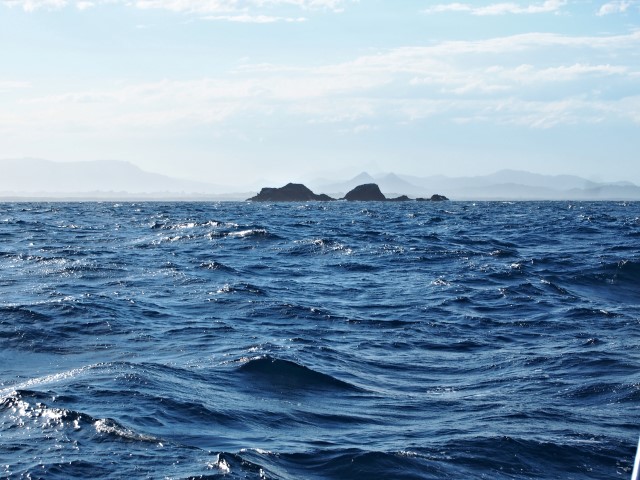 a thunderstorm rolled over from the mainland (Lisa’s Photo) 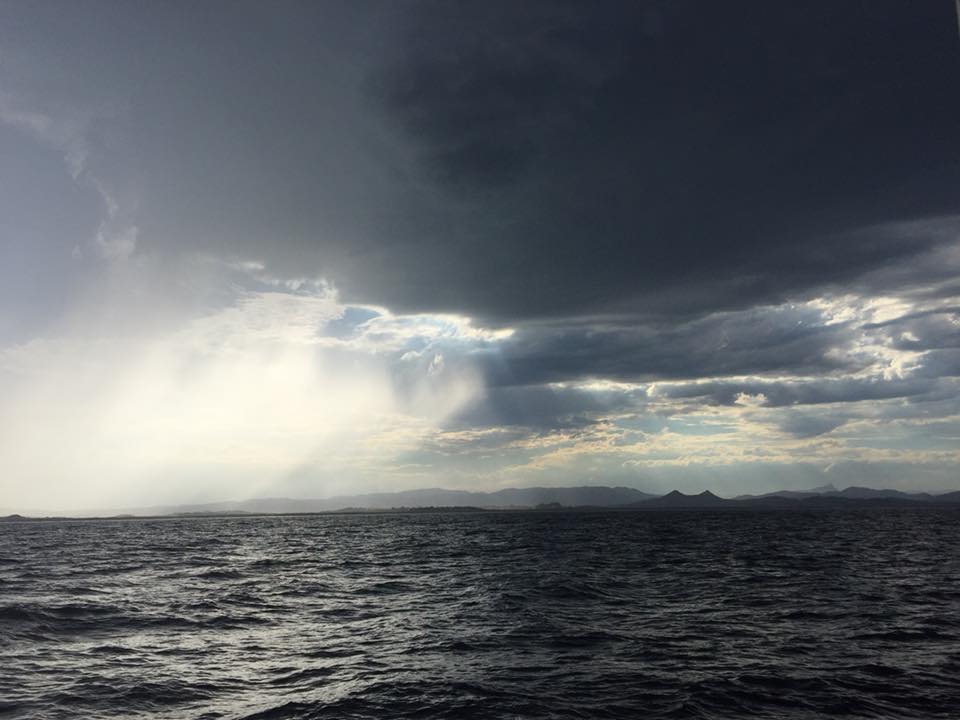 with a rainbow in it’s tail (Lisa’s Photo)

By now we were hours ahead of schedule, resulting in a need to spend 6 hrs bobbing around with no sails up, waiting for dawn. There were 20 odd prawn trawlers working off the Clarence River bar crossing, that all headed for the bar crossing at dawn. Never one to ignore local knowledge we joined the procession. (Lisa’s Photo) 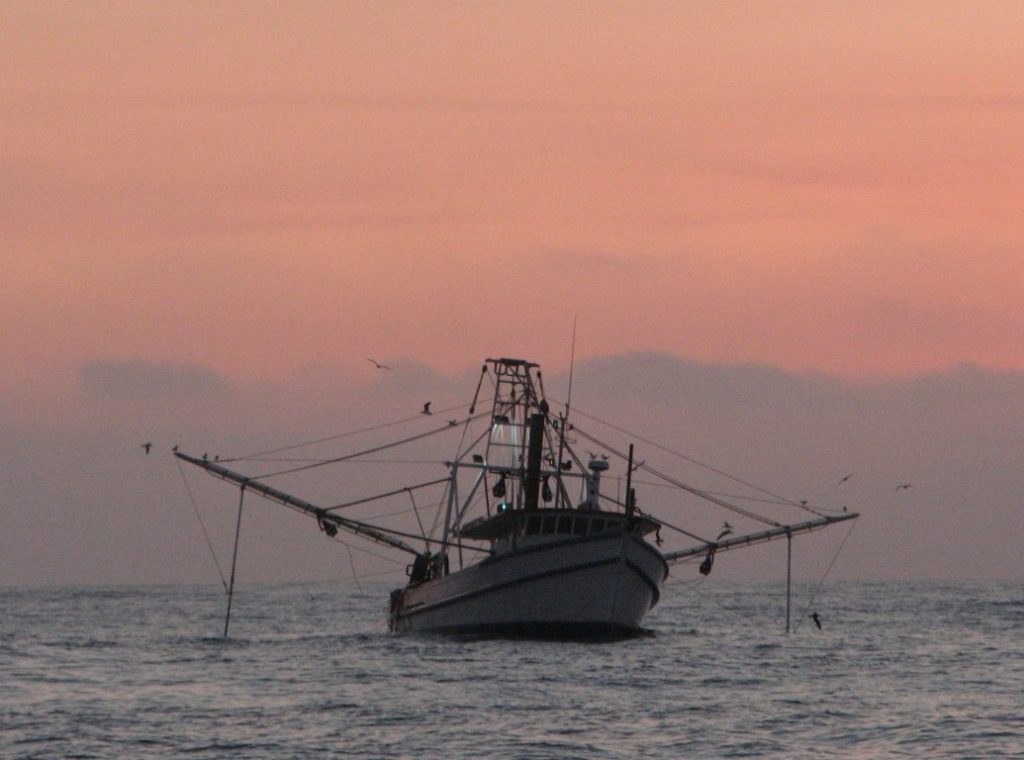 Geoff had woken at 4 am, seen us on the tracker and drove over to watch us cross the bar 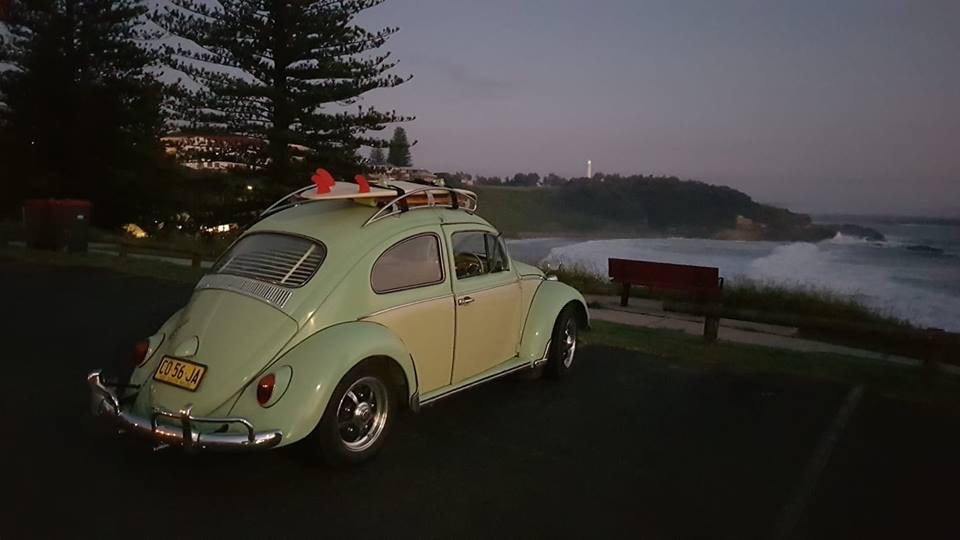 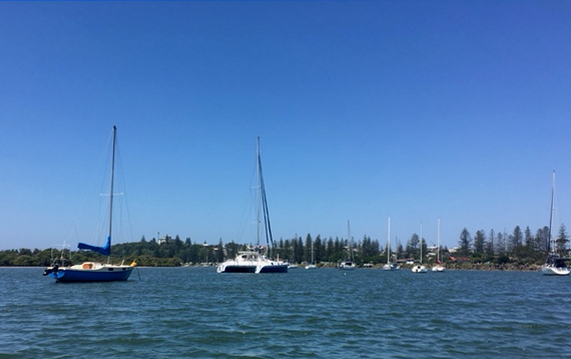 After a few hours of sleep we went ashore in Albert, to have coffee with Geoff and Micklin.

Bruno drove down from Brisbane to spend a night on Logic.

We all met up at the Pacific Hotel for sundowners 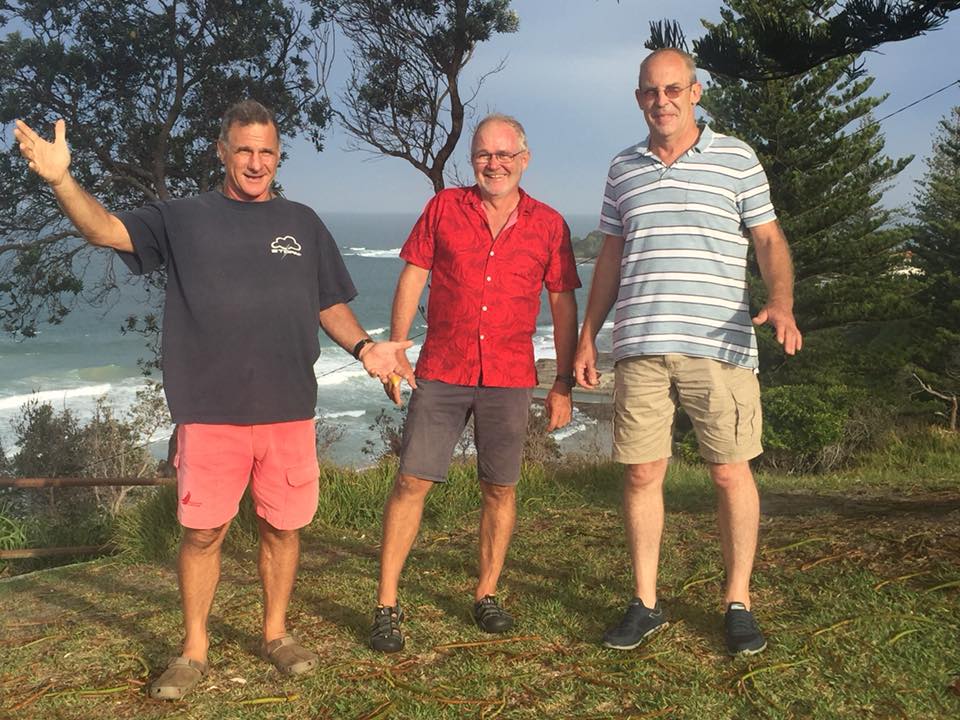 A great place to have a beer, looking out to sea 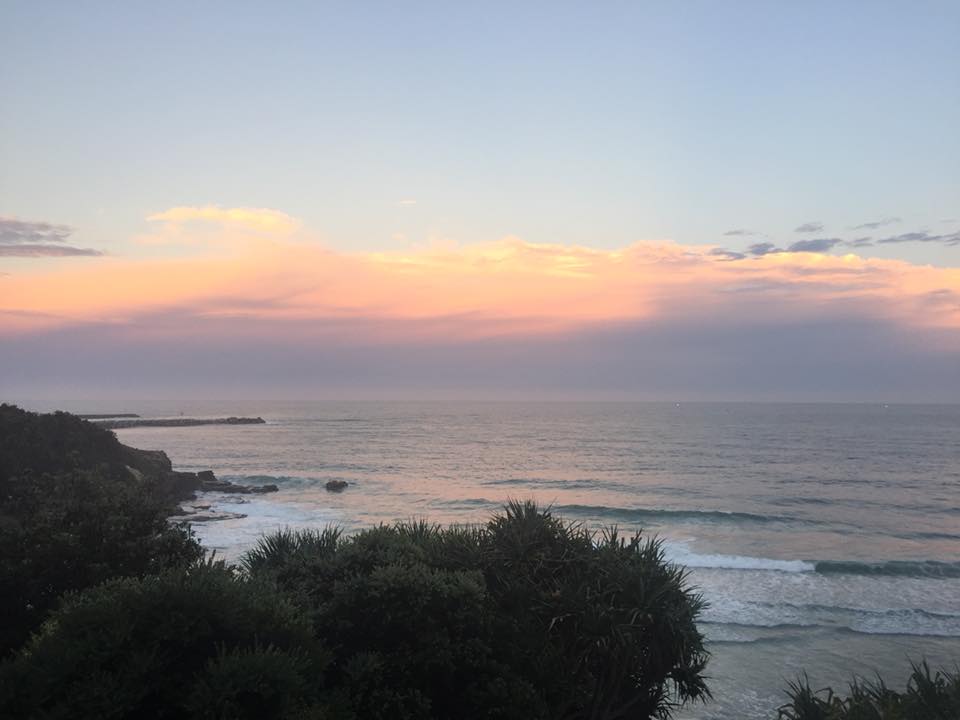 The next day Bruno took us for a drive, to see the local sights 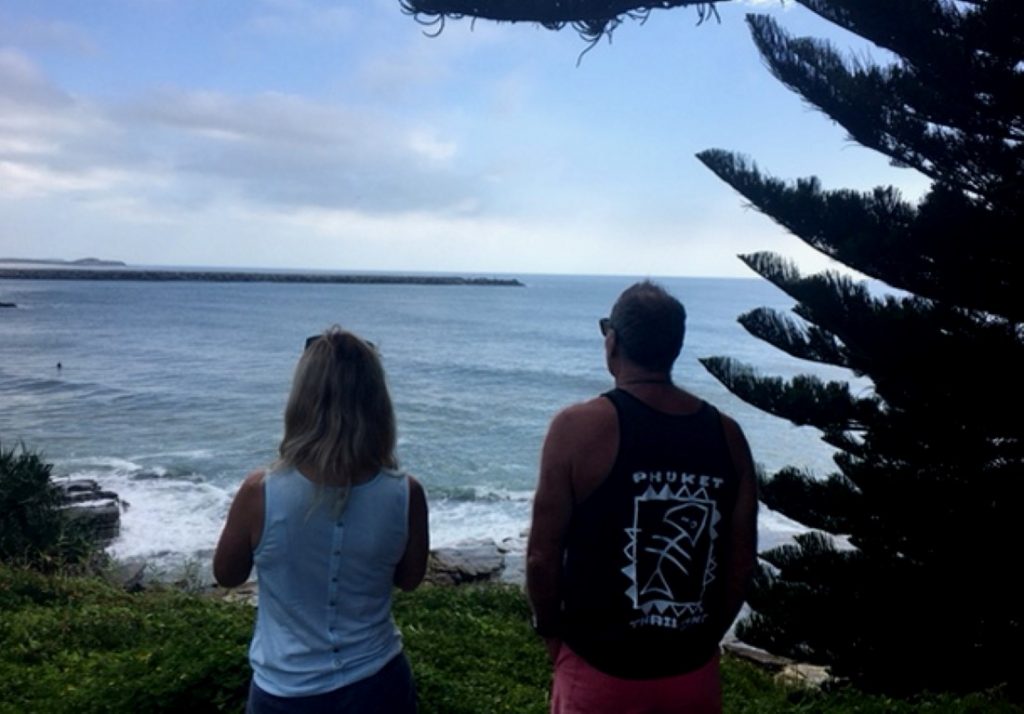 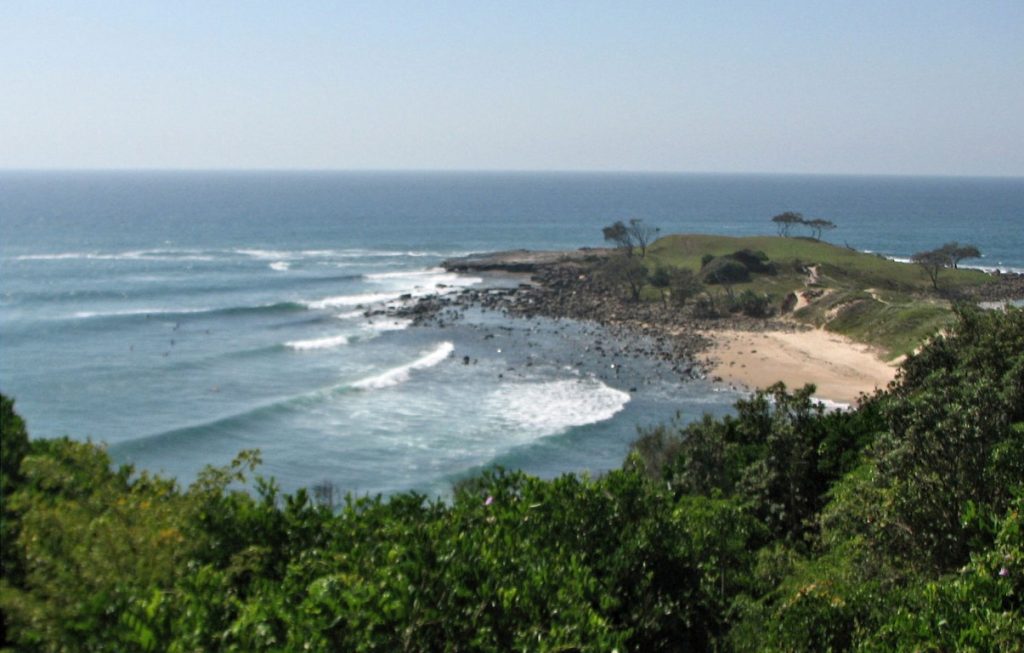 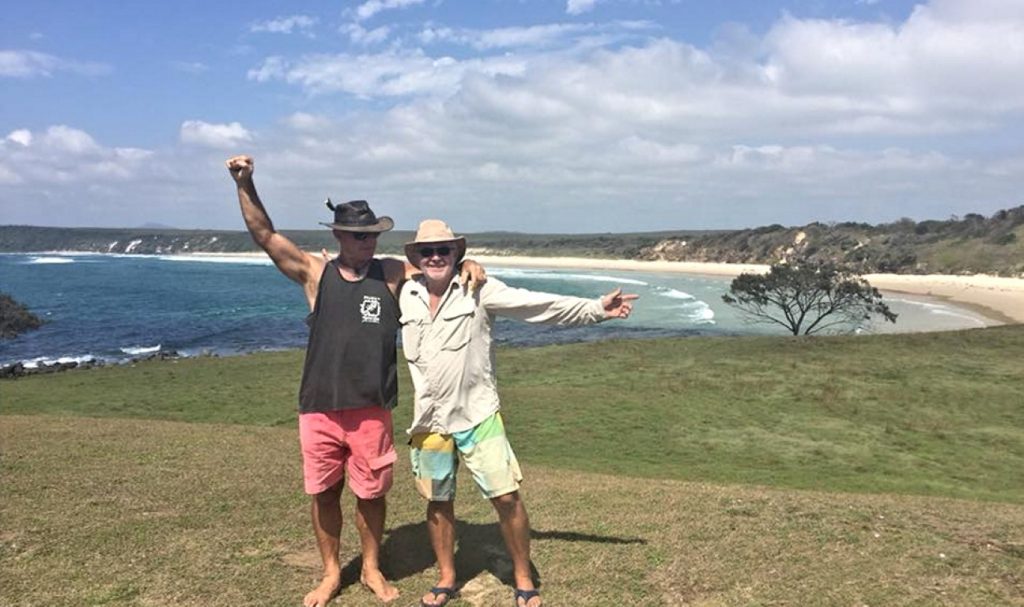 Then back to Pippie Beach for a swim 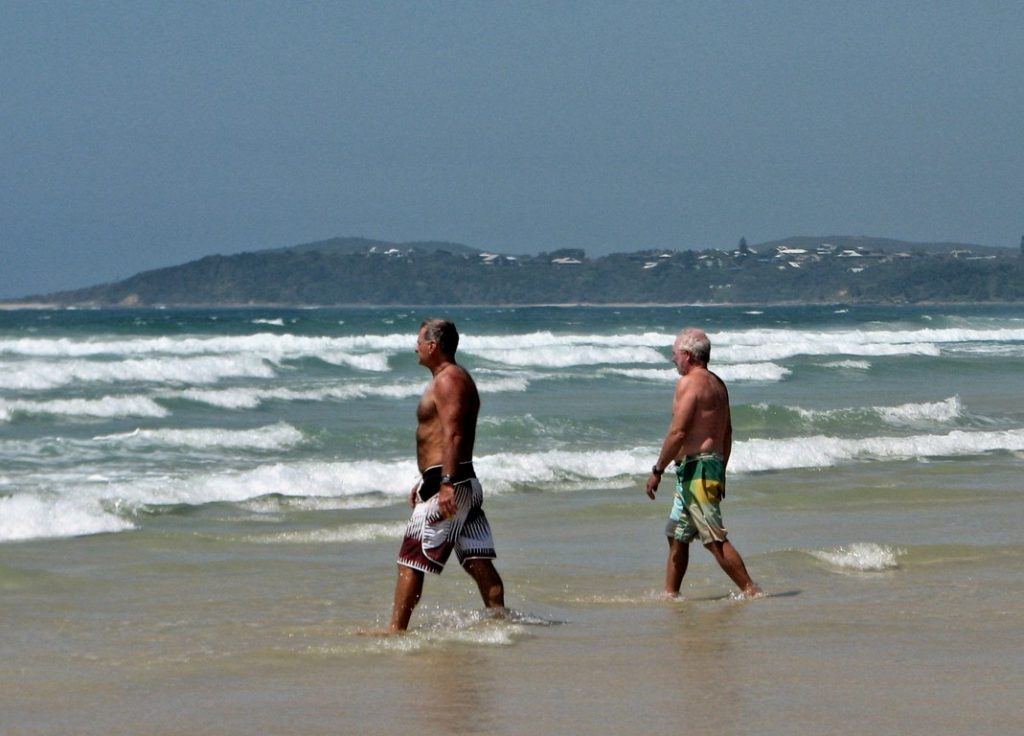 Geoff and Michlin had us over to their house for dinner that evening. We did a big raid of their Lime, Lemon and Lychee trees to stock up the larder (passionfruits came from my daughter Kate) 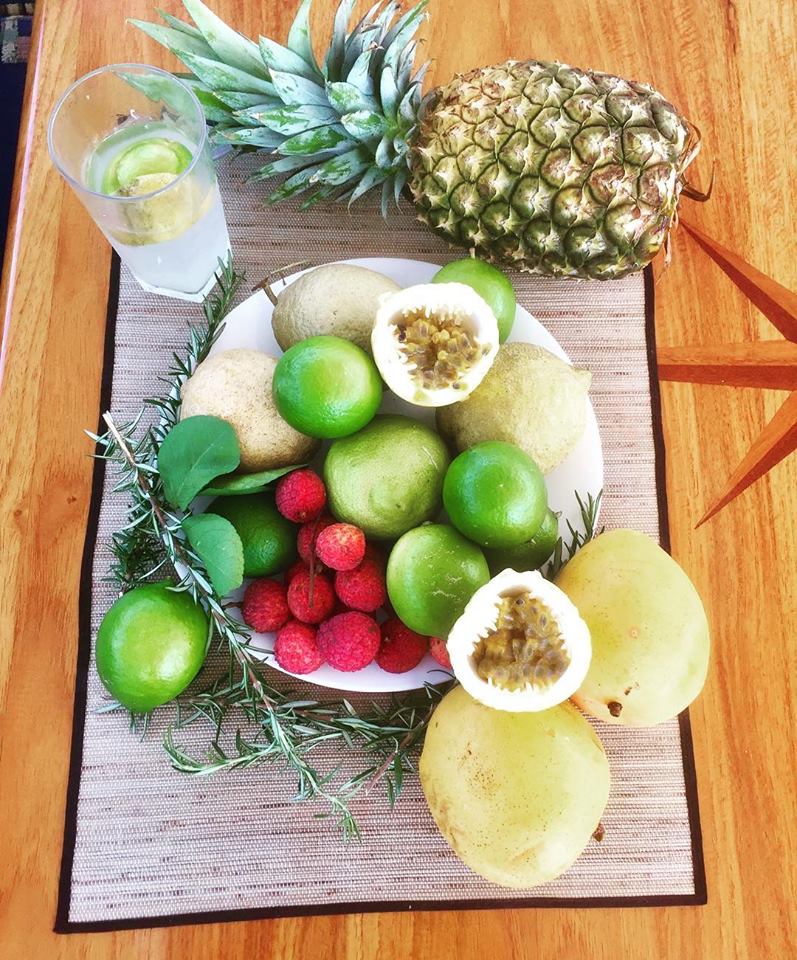 While the Clarence River Bar crossing was a non issue now, 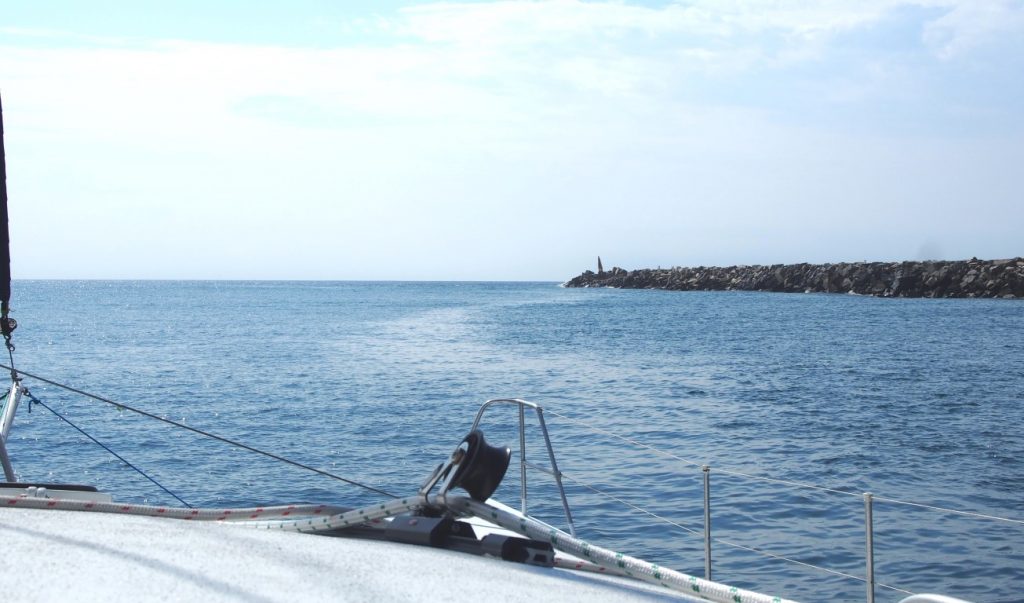 with the approaching remnants of Cyclone Gita, that would not be the case later in the week

There was a front forecast to come up the coast in a few days time, there was a very usable northerly wind on the top of it and a southerly on the bottom. With  25-30kt of southerly for a few hours, as the front went over the top. 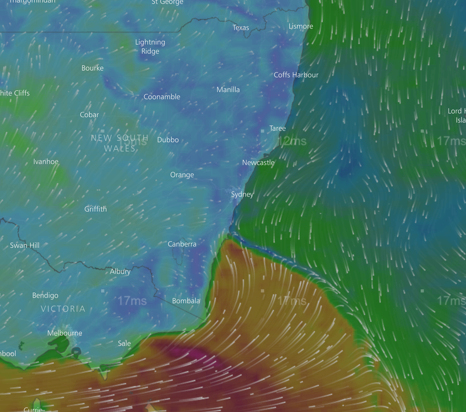 Port Stephens has a very good southerly anchorage, ideal for the weather forecast. So the decision to do a 220mile overnighter was a no brainer. 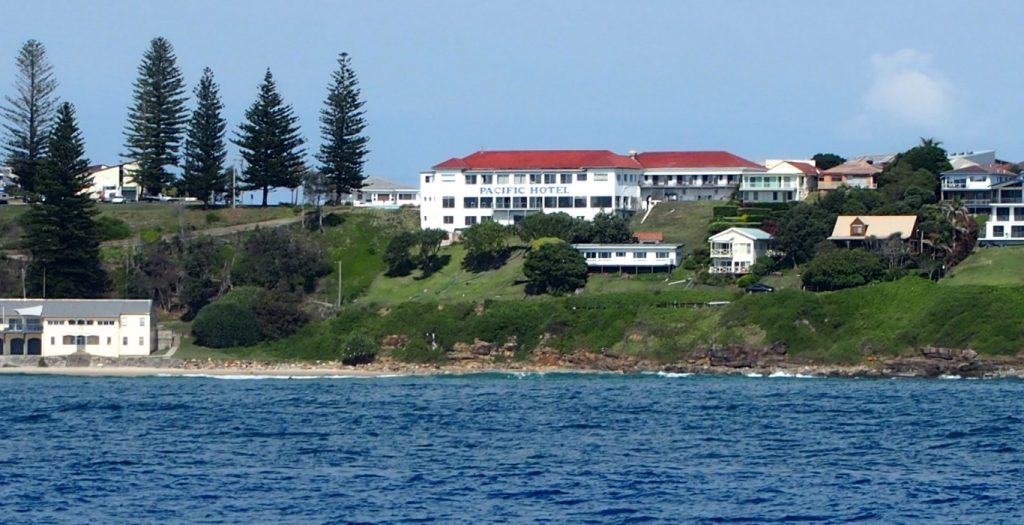 The East Coast current runs North to South down the Australian coast. If we could find it, it would significantly speed up our trip. To find it one needs to head offshore until the water temperature goes up a few degrees. Which we did and picked up around 1.5kts for most of the trip south.

Just as we go in the current, Lisa notices a fish on one of fishing lines we had out

We made good time, arriving in Port Stephens  mid afternoon. Good light to identify a patch of good holding sand to drop the anchor in, then put the motors in reverse to make sure the holding was good enough for the southerly blow coming