One of the joyous things about the cruising life, is the amazing friendships I have made along the way. This time last year I motored into Musket Cove in Fiji, to see another Mumby 48, already there, so after picking up a mooring buoy,  I dropped the dingy in the water and went over to introduce myself, to Barry on Twocan. The first thing he did was offer me a beer.

Choosing one’s ideal cruising yacht is a very personal thing, as there are a lot of variables to be considered and compromised to be made. Mumbys are very different from the bulk of the other high internal volume catermerans out there. We spend 95% of our time on anchor or in a marina, and less then 5% actually sailing, so most people put a higher priority on creature comforts, for the non sailing time. Mumby owner are people who give sailing high performance, a higher priority in their ideal boat selections criteria.

Getting a Mumby Catermeran is not an easy thing to do. There were none on the market when Barry was looking, so he had to get Twocan made in the Philippines, a very “interesting” 2 year adventure, with plenty of stories, he has shared with me. Luckily Tim Mumby had his latest 5yo personal use boat for sale, when I was looking. Deciding to buy it after a test sail in the Philippines was one of the easiest, big decisions I have ever made. Then there was the 3,500 mile journey to get Logic back to Brisbane. Getting a Mumby is no simple endeavour, with a salesman at a boat show, signing one up  for a new boat, delivered to one’s doorstep.

The fact that Barry and I had made the same boat choose and gone through the numerous “hoops” that are necessary to get our boats out into the South Pacific, meant that there were a lot of similarities in our personalities, the makings of a strong life friendship. Even after 5 weeks of living side by side we still had plenty to talk about.

What is a Frazza;- For the non Australian, Bazza is a diminutive of the name Barry. A Frazza is a cruising partnership of Francis and Bazza.

For all of June 2018, Barry has been sailing Twocan solo and I have been sailing Logic solo, around New Caledonia. We cover a little over 500miles in that time.

Anchoring close enough together, so that Barry could piggyback my internet dongle connection. 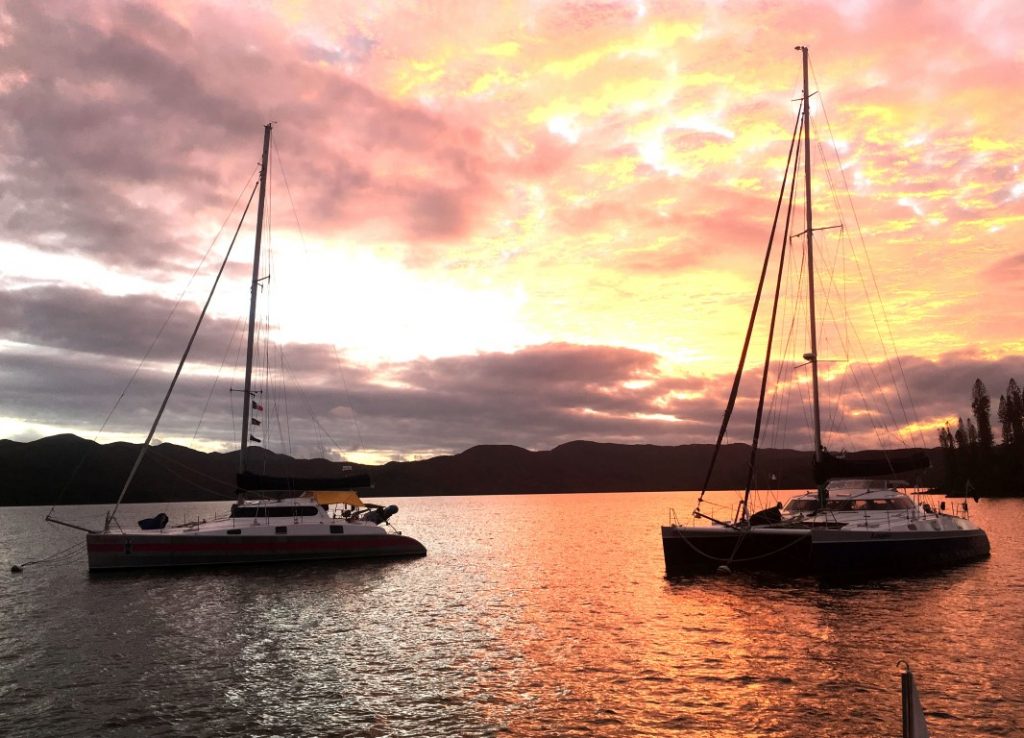 There was something reassuring to look over and see that the other Frazza was making the same sail call, and doing the same speed 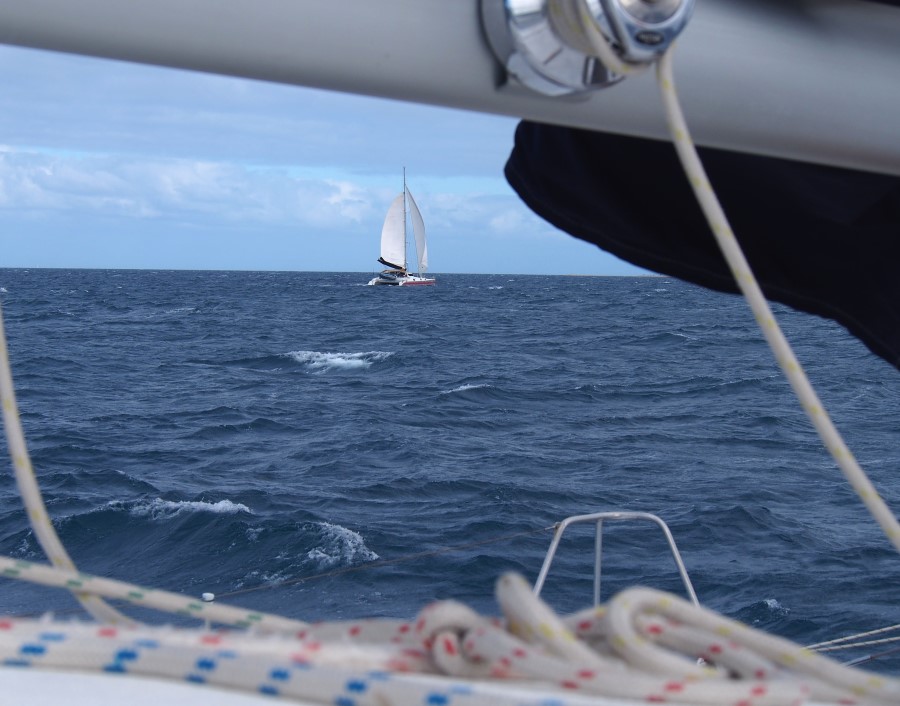 or, deciding that the wind was too much “on the nose” to bother with pulling up the sails 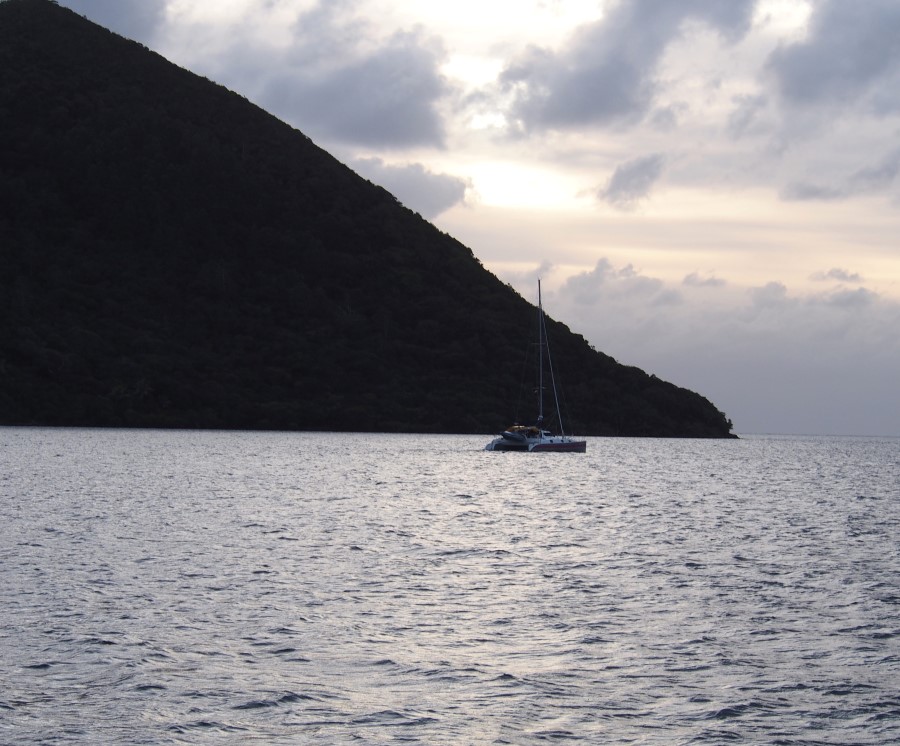 Despite the fact that these are big boats to be single handed sailing, with a big powerful sailing rig, having a sistership in close proximity made the sailing exceptionally enjoyable.

We communicated via the VHF radio.

To boast of our fish catches.

I got the prize for the biggest catch, this 14kg monster Spanish mackerel 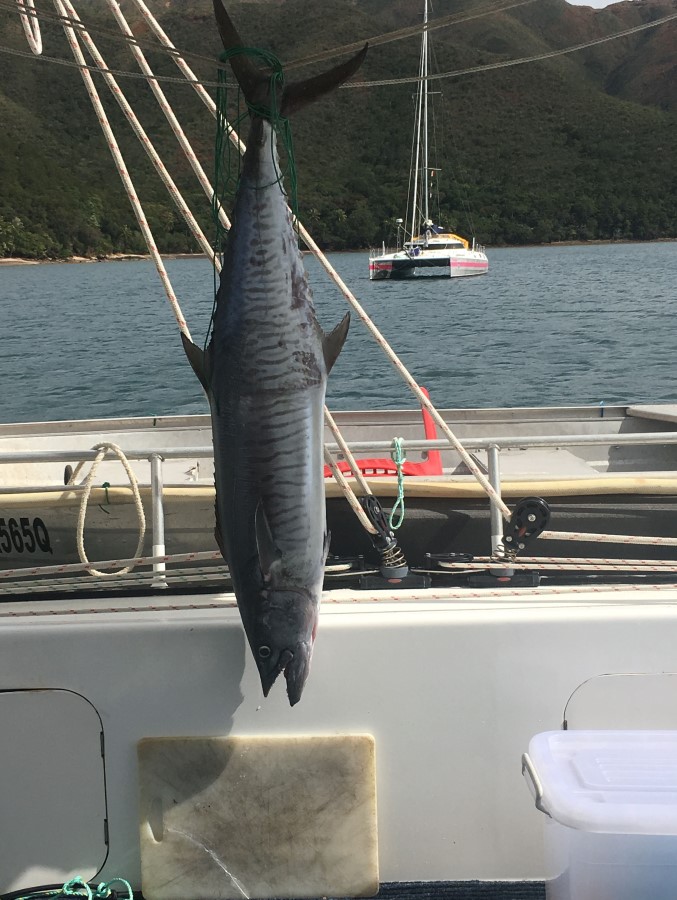 He was too big to fit all of him in the freezer, so we took half ashore to give to the appreciative villagers

While Barry kept on pulling in fish, on my rejected lure, re-skirted with spare skirts that I thought would never work.

On the longer days, one of us would keep and eye on the two boats, for alternating hours, while the other had a rest.

We alternated the cooking on our respective boats, which took the tedium out of meal preparation. We both enjoy cooking, resulting in us eating very well for the month.

We climbed the hills behind the anchorages 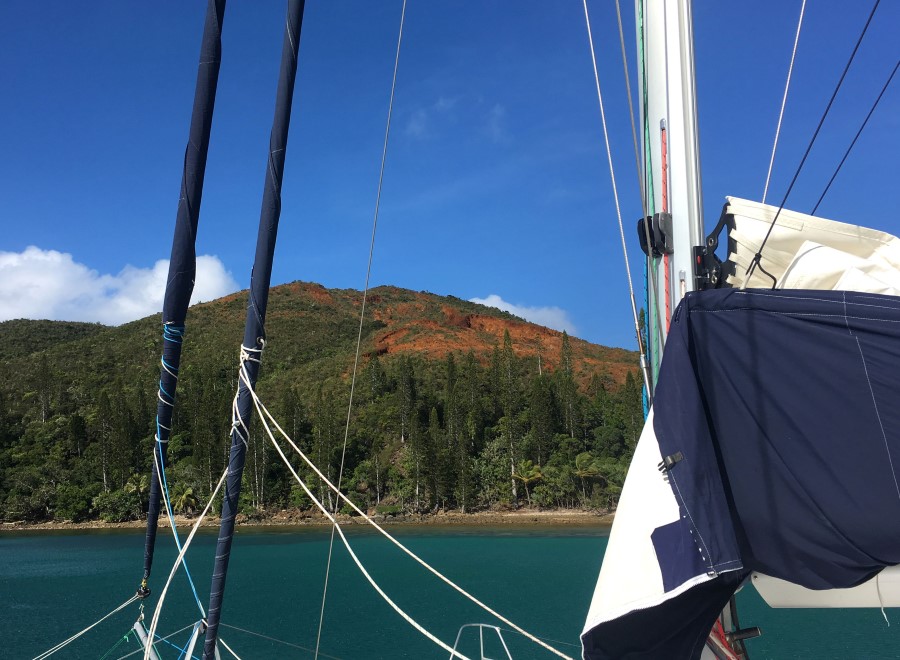 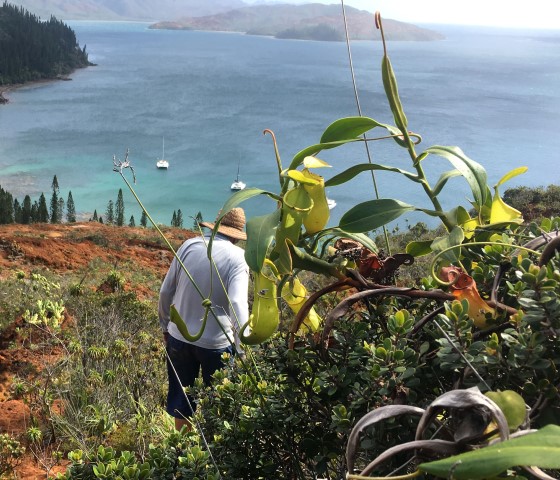 (note, the carnivorous, pitcher plants in the foreground) 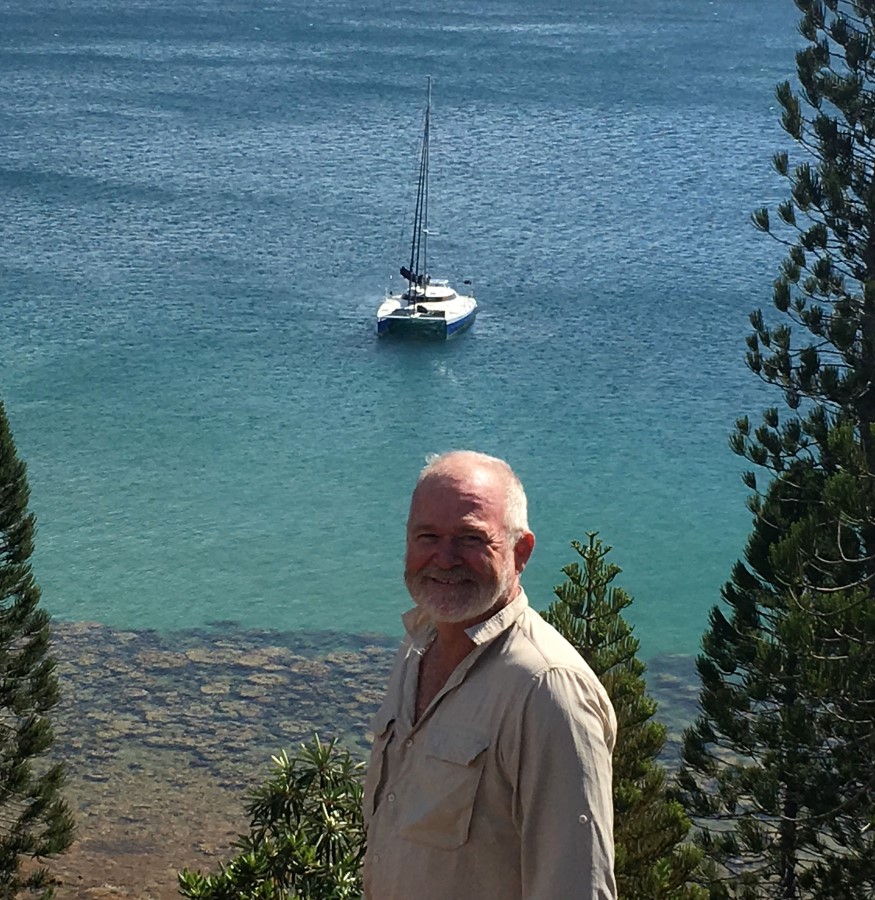 Then scrambled through the thick vegetations, 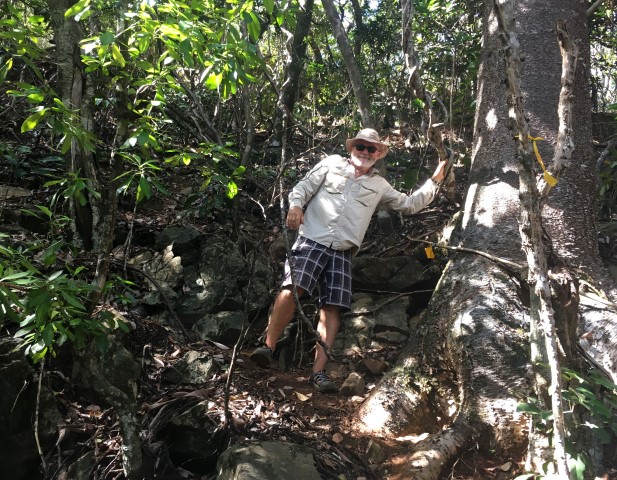 to get back to the beach 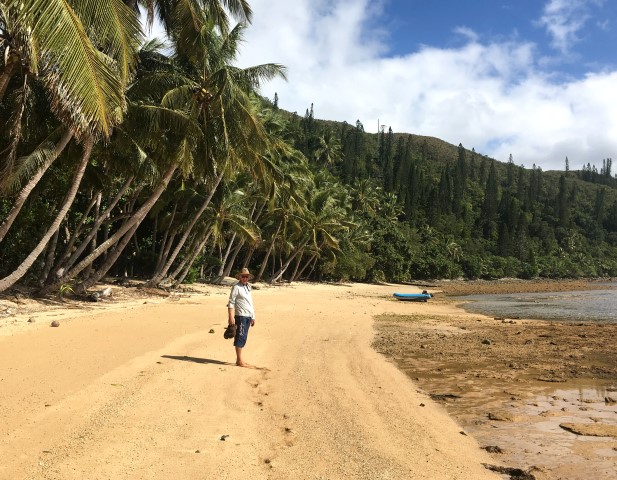 (then waited an hour for the tide to come in enough, to get the dingy across the coral)

And got repeated enjoyment in sailing our boats hard, (these photos were taken in 20kts of following wind) 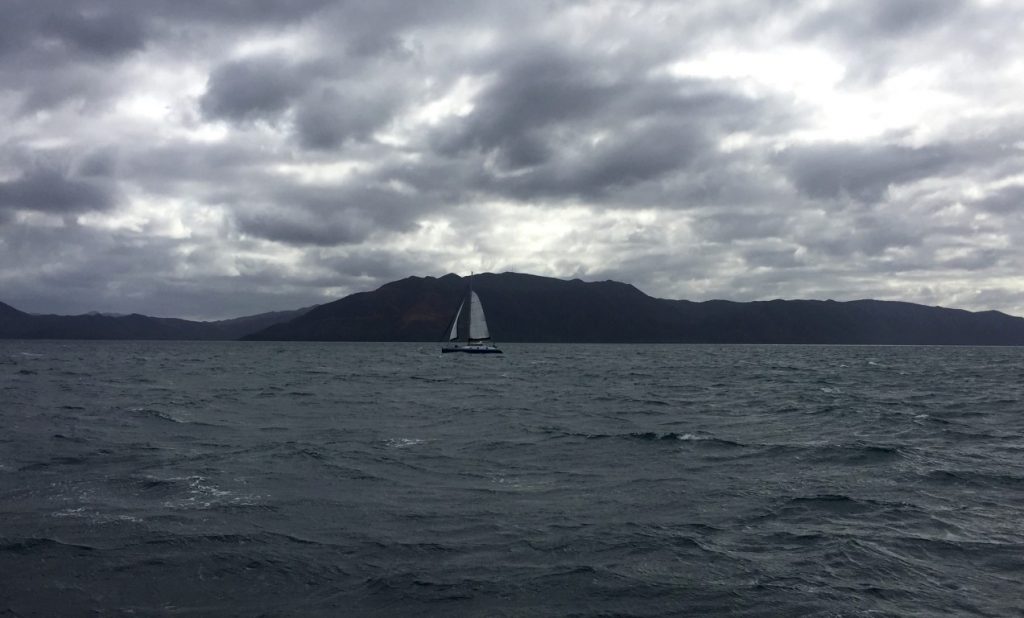 But life goes on, and we have moved from deserted anchorages to the crowded mooring field off Ilot Maitre  (opposite Noumea)

Bonsour my good friend, until our next Frazza