There were 3 pages of non critical jobs festering away in the back of my brain, that needed addressing if I was going to be able to truly relax. So I made the decision a month ago  to go back to Brisbane and cross them all off the to-do list.

It has been a productive month of boat jobs, a rigger has been up the mast fixing things, a mechanic has aligned the motors to the propeller shafts, an electrical has run some more cables and I have installed AIS (Automatic Identification System) along with a few page of small jobs. The dentist has been seen, as has the accountant, who has all the figures for the just finished financial year. There is now a feeling of lightness, without all the planning for those jobs ticking away in the back of my brain.

time to catch up on the blog;-

At the end of the last blog Logic was at Great Keppel Island.

The weather forecast was for 15-20kts, from were I wanted to go, which made it too difficult to go around Curtis Island, so I decided to go on the inside, a passage known as “”the Narrows”.

So I motored down to the top of Curtis Island, anchoring for the night in Pacific Creek 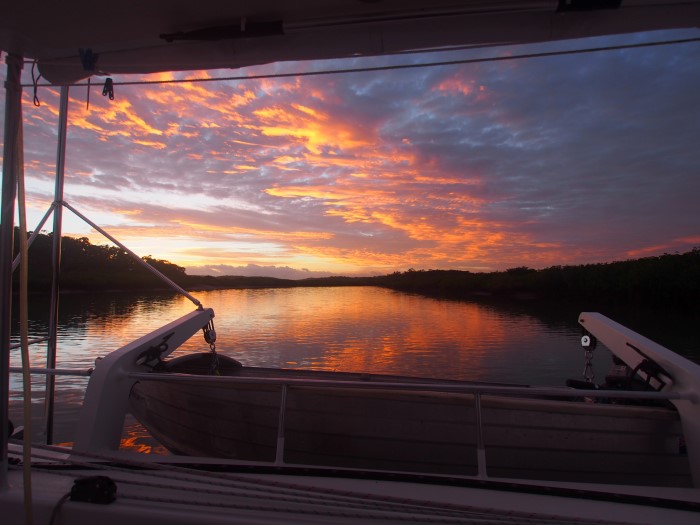 The guide book talked of crocodiles, which would have been interesting to see from Logic for the first time, but they were not making themselves visible. What there was though was sand-flies. If they ever make sand-flies and Olympic sport, this spot is were they should go talent hunting. Despite the fly screens on the hatchs 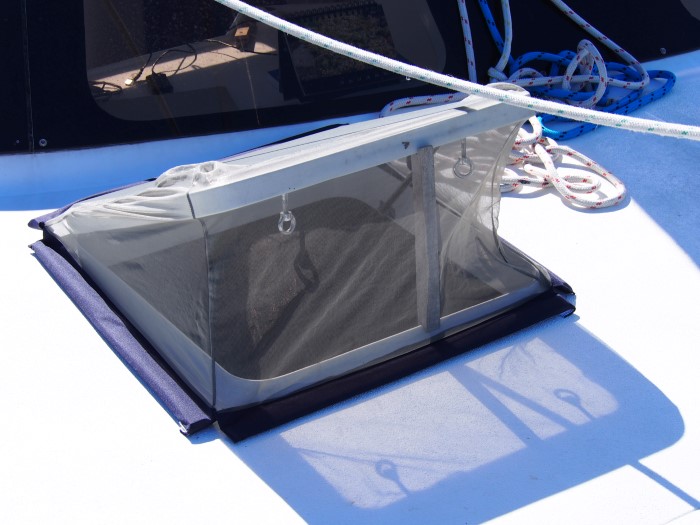 and the mosquito mesh across the back of the cabin (yes, I know it is blown into the door way in the photo, it definitely wasn’t that night) 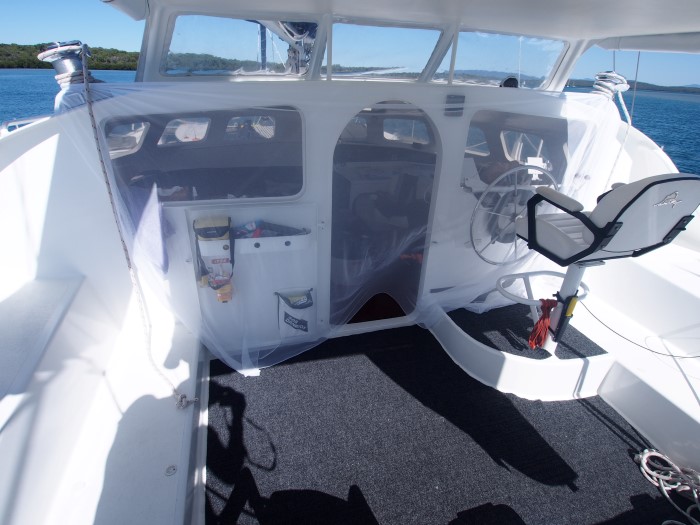 there was still plenty inside, for the experiment, to see how effective those old fashion mosquito coils are. The result of the  experiment was that they were very very effective. The next day it looked like one of those movie scenes after a big battle, with dead sand-flies everywhere.

It had been 40years since I had last been on a boat traversing “The Narrows”,  there was something exciting about reliving those childhood memories.

The tide there has a 4mt differential between high and low tide. There are some places in the channel that are 2mts above the water at low tide. So of course you navigate it at high tide. There is a spot called “the cattle crossing” where cattle are herded from Curtis Island to the mainland (at low tide). 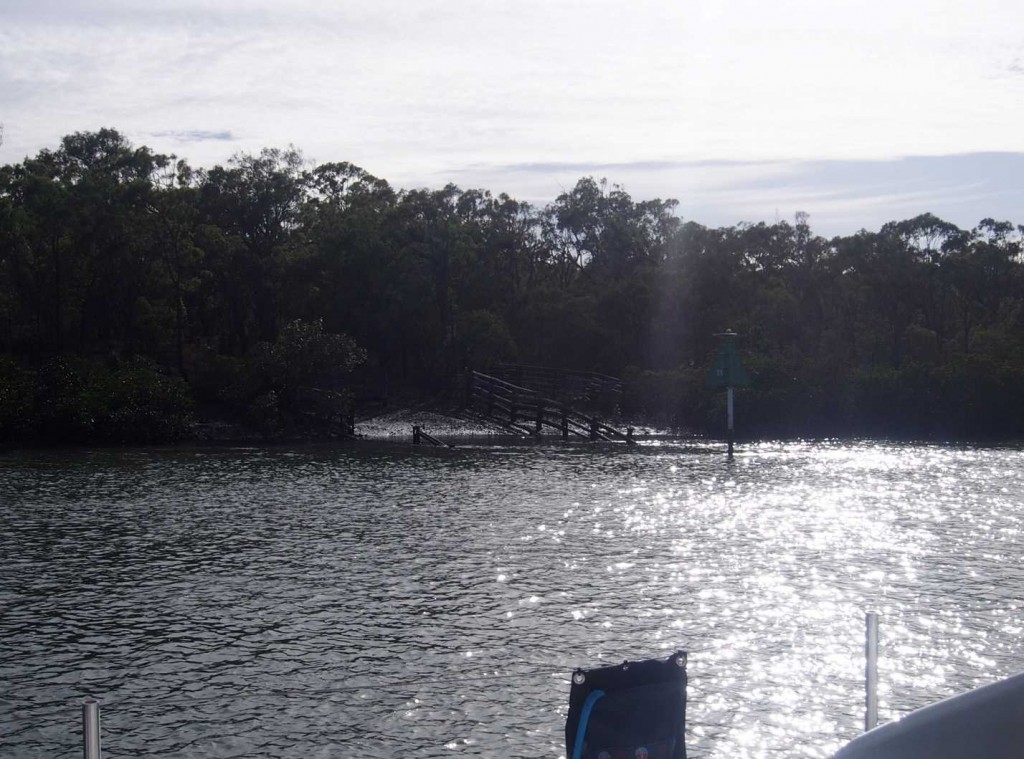 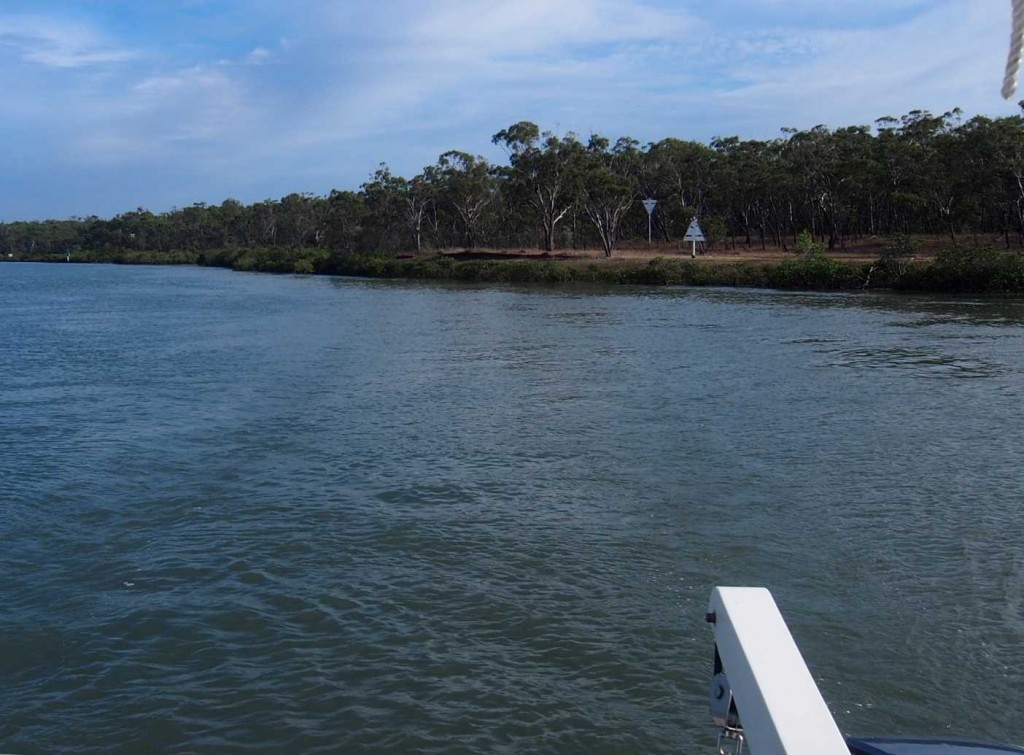 It is hard to picture this scene in 6 hours time, when these mangroves will be 2mts out of the water, luckily I did not stray from the channel, and run aground, to see it.

A few hours of motoring later, I came to Gladstone Harbour. First into view were the natural gas compression plants, that turn the piped  in natural gas into LNG for export. While they look impress, I was expecting visually more for the tens of billions of dollars they cost.

on the way out of Gladstone Harbour, I passed one of the new, purpose built vessels, for transporting the LNG.

after a long day, I finally made it to Pancake creek for a well deserves few days spell. 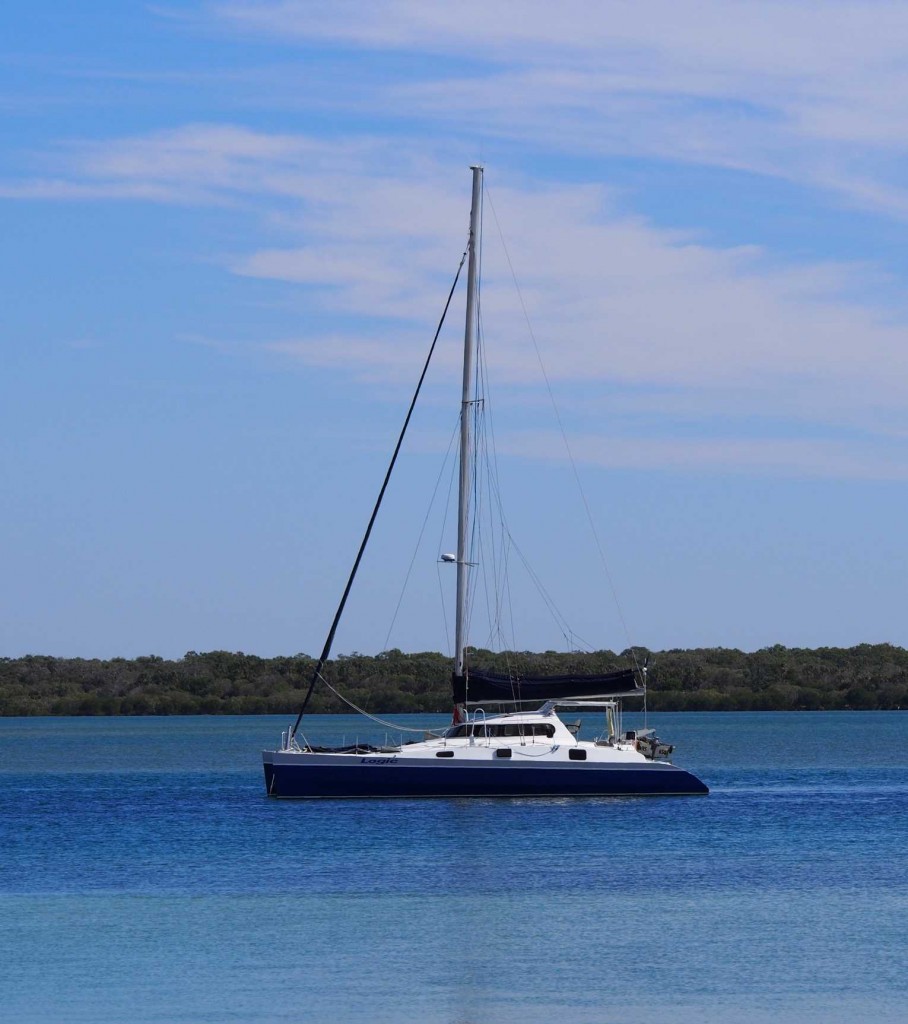 during which I went for  a walk up to the light house. 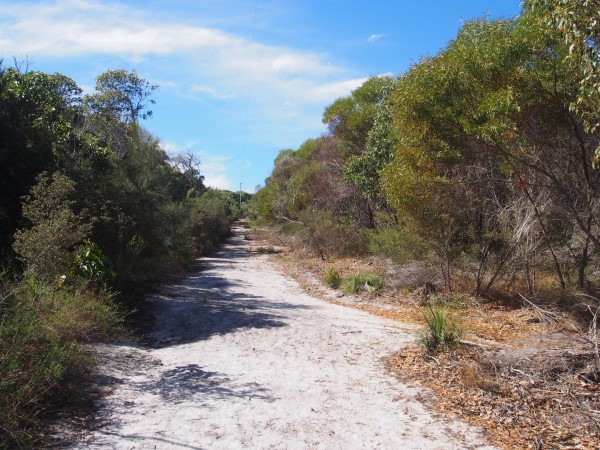 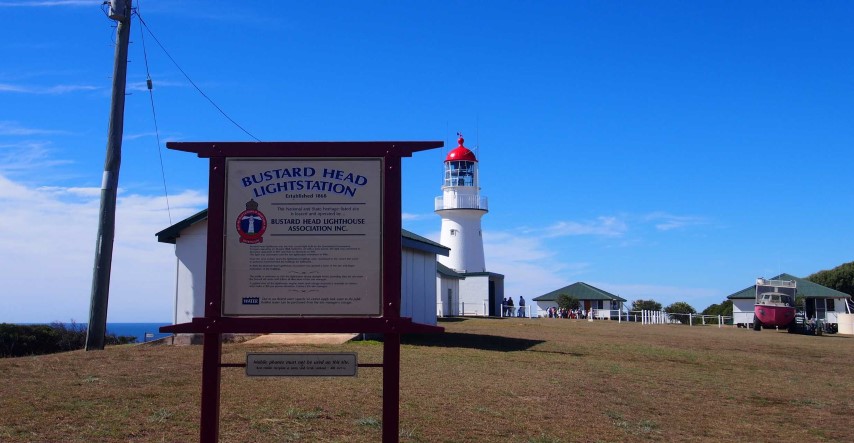 Time for the next leg south, to Hervey Bay.

after the night time land breeze died, there was no wind until mid afternoon (nice and flat, good motoring  seas),  Then it picked up to a 20-25nt northerly, which made for a quick run into the top of Hervey Bay, keeping me too busy to reach for the camera.

I then spent a few days in Gary’s Anchorage in the Sandy Straights, between Fraser Island and the mainland, waiting for the weather window, to go across the Wide Bay Bar. 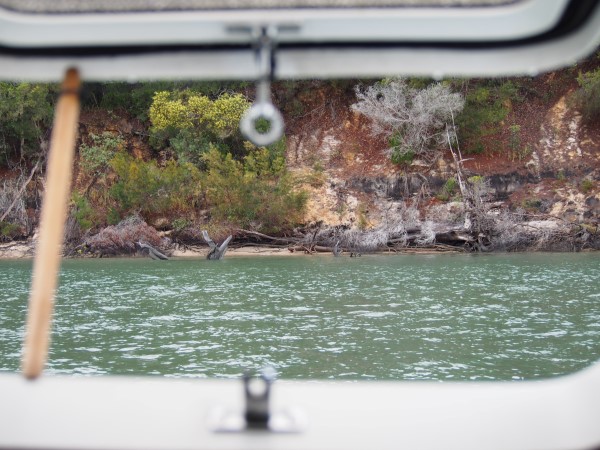 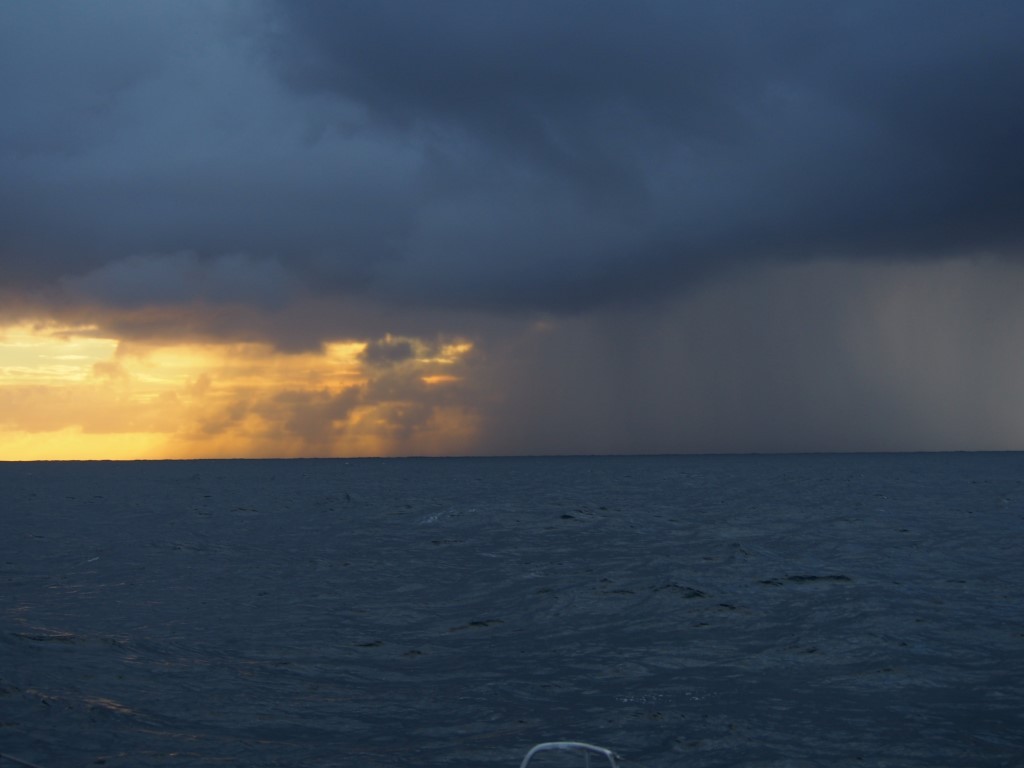 To get across the Wide Bay Bar, you need to run north (parallel with the Fraser Island beach), until you get past the outer sandbank, then you have to turn east before you hit the sandbank on the other side of the channel. 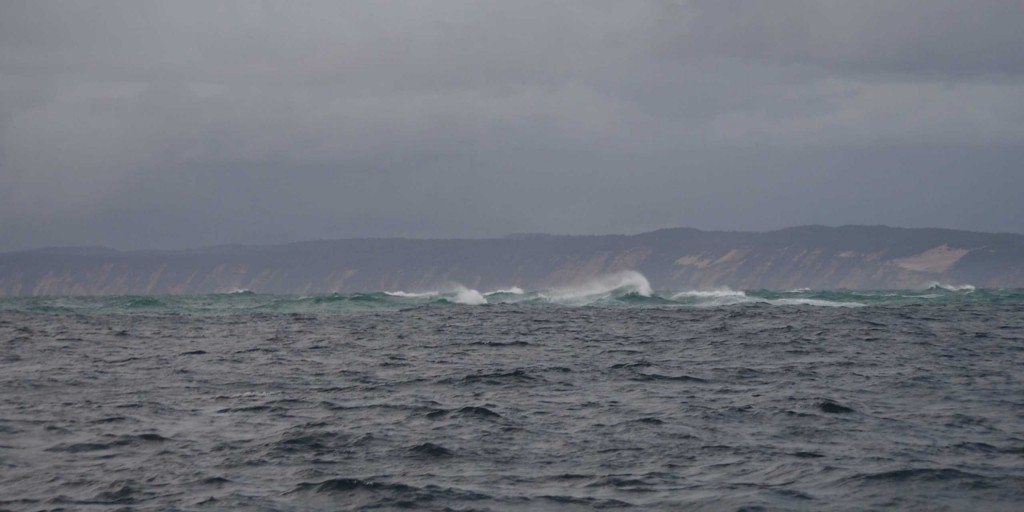 It ended up being an uneventful crossing

although Wolf Rock , had a decent swell breaking on it. Wolf Rock is 1.5miles north of Double Island Point, plenty of water all around it, but none on top. 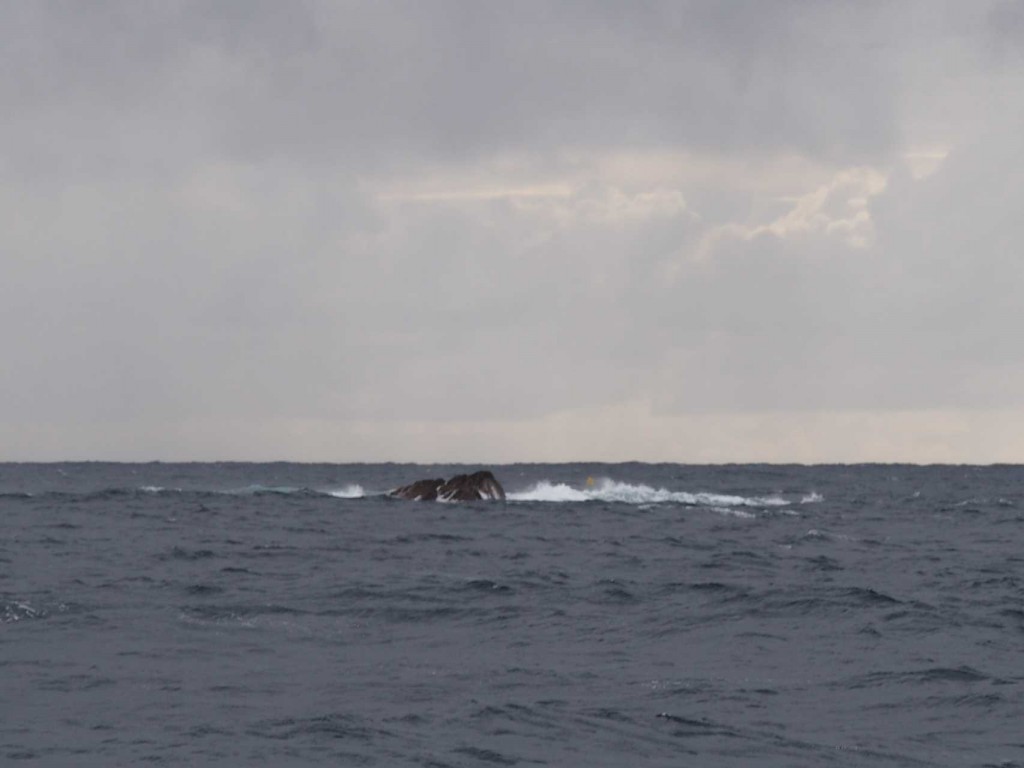 as I was going down the coast, enjoying the rain squalls …not, the strong wind warning for the that evening was upgraded to a gale warning. I was planning to spend the night anchored behind Morton Island, 20-25kts was doable, 35-40kts would have been too uncomfortable. A quick phone call to the marina in Mooloolaba, confirmed they had a birth in their marina, so that is where I spent the night 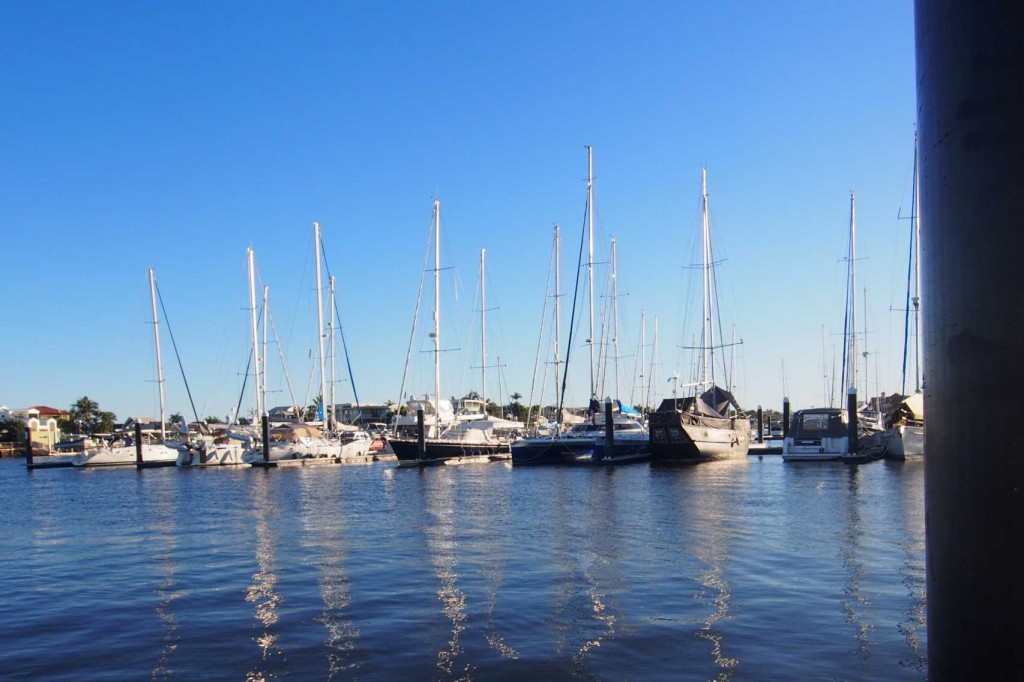 the next morning there were breaking waves across the breakwater channel into Mooloolaba.

There was no way of safely getting out, so I decided to stay for  week and relive some more childhood memories, of spending the Christmas holidays living on a boat moored in the marina. swimming and surfing in the ocean beach 150mts across from the marina 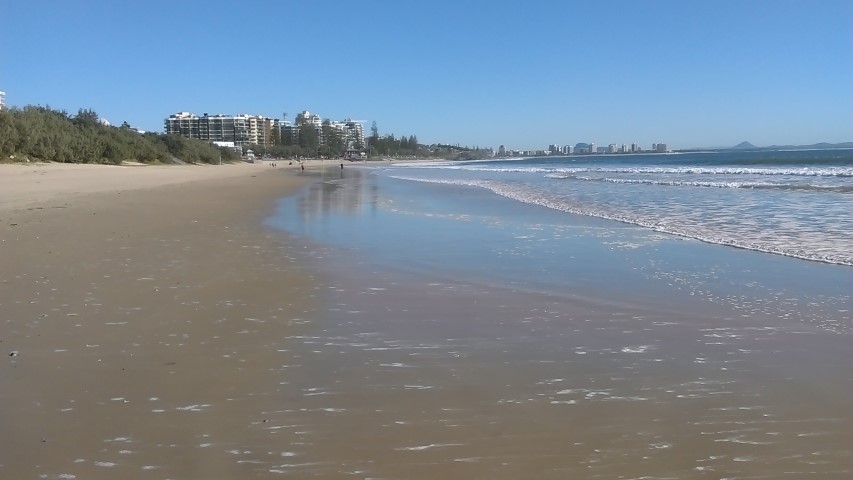 after which it was an easy day’s sail back to the marina at Manly Brisbane.

going past Caloundra and the Glasshouse Mountains

it hasn’t been all work for the last month, there was the mandatory run over to the sandhills on Morton island. There was an unusual mixed flock of birds on the sandhill (security in numbers) made up of pied oyster eaters, terns and spoonbills 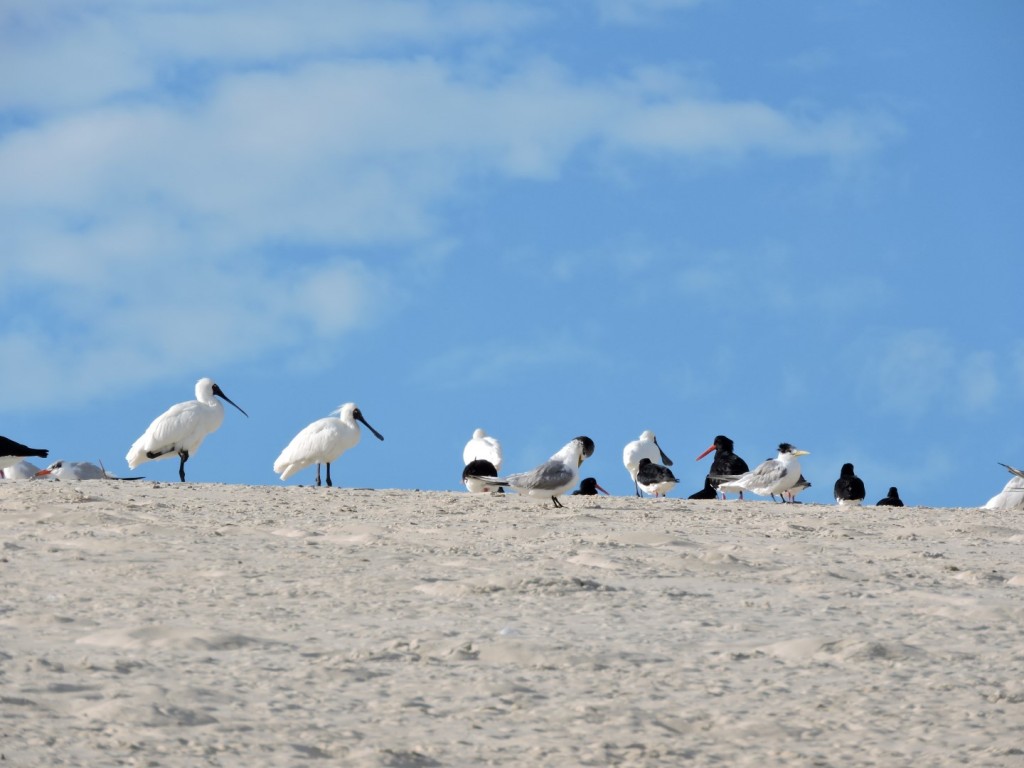 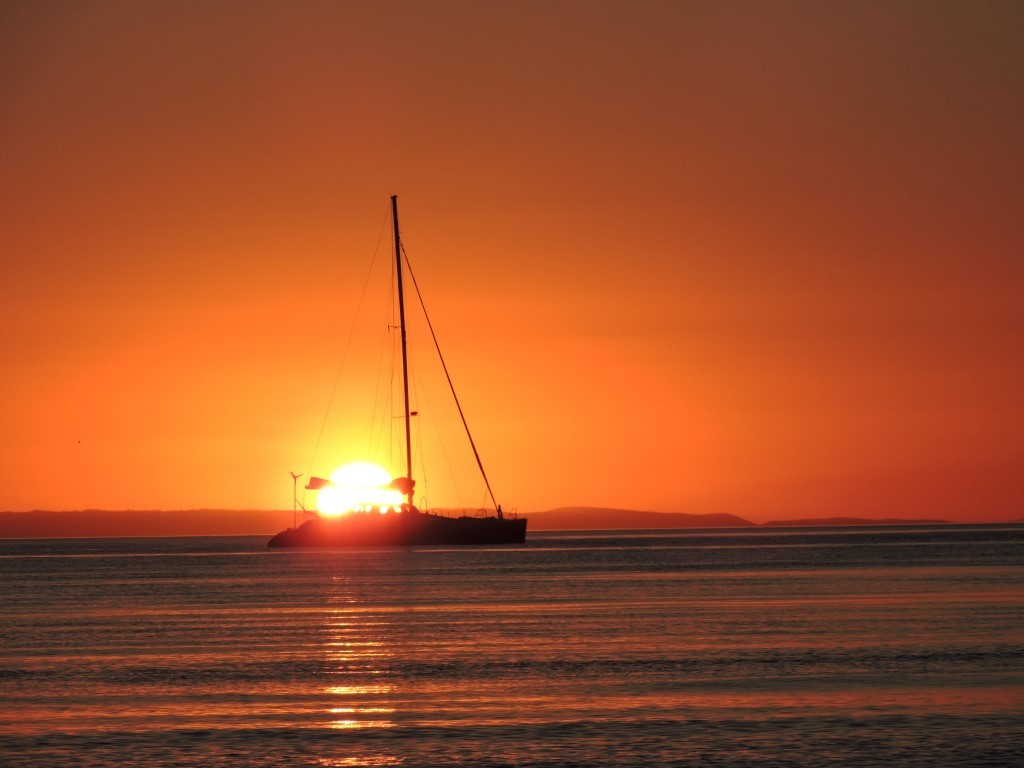